Shelf Control is a weekly celebration originally hosted by Lisa @ Bookshelf Fantasies, which is now hosted by Mallika @ Literary Potpourri. Lisa said: “Pick a book you own but haven’t read, write a post about it (suggestions: include what it’s about, why you want to read it, and when you got it), and link up! For more info on what Shelf Control is all about, check out my introductory post, here.” Also see the change over post here.

Want to join in? Shelf Control posts go up every Wednesday. See the guidelines at the bottom of the post, and jump on board!

For my 9th entry… The Garden of Ruth by Eva Etzioni-Halevy! 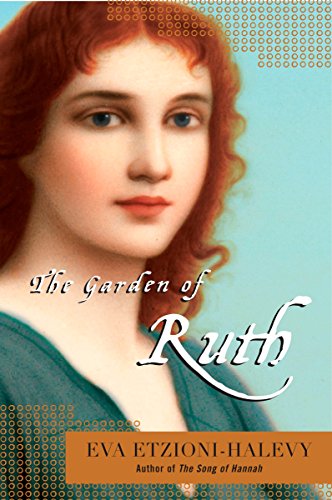 This is one of those books that I really don’t remember buying. However, according to Amazon, I did buy it – in print, of all things (obviously not caring about the price of international shipping, which has always been pretty steep), way back on September 20, 2008. Now, it is possible that my husband decided we should buy this, and was probably drawn to it by the obviously Israeli name of the author. Either that, or maybe the idea that this is an historical fiction book about the biblical character Ruth that caught his eye. Maybe he even bought it for me, without my knowing, but I somehow doubt that. I’ll never know. In any case, it has been sitting on my shelves for quite some time now (it was published at the end of 2006), and I’ve yet to feel drawn to it enough to pick it up! Plus, I don’t recall any of my fellow book bloggers reviewing this novel, so I have my doubts that it was recommended to me by anyone. Finally, I’m really not a huge fan of the cover of this book, either.

As I’ve said many times, I am willing to give anything a chance, so let’s look at the blurb on Amazon (which is also on the back cover of this novel), which is as follows:

Sitting beneath a tree in ancient Bethlehem, Osnath, niece of the prophet Samuel, examines a dusty scrap of parchment she found hidden in her relative’s scroll room. Scrawled on the decaying page is an intriguing message addressed to Ruth the Moabite—great-grandmother of David, the future king of Israel. Compelled to discover the truth about Ruth’s life, Osnath begins searching for the identity of Ruth’s nameless lover and the secret that is cloaked behind his anonymity. But as she digs deeper into the past, she finds her inquiries blocked by David’s brother Eliab. What is the long-buried truth he fears will come to light? And what is the threat that Ruth’s story poses to his family’s vast inheritance?

Um… excuse me? Ruth’s nameless lover? Did this woman not read the Book of Ruth? There’s something here that really doesn’t sit well with me. Okay, yeah, we all know that the Bible and the many scriptures aren’t actually factual accounts, but still… I’m not loving this already. Amazon also says:

Eva Etzioni-Halevy’s novel deftly interweaves history and fiction to create a compelling exploration of a prominent biblical figure. Told through the voices of both Osnath and Ruth herself, The Garden of Ruth transports readers into the ancient world—and offers a dramatic and thought-provoking new perspective on a well-known tale.

Hm… dual timelines, as well, eh? This really does not bode well for me, I’m afraid. So, I went to look at the opening paragraphs. What I found was a bit confusing, where Osnath finds a poisonous snake in her bed, followed by her opening her mouth with “a soundless scream.” After that she RUNS out of the room. Oh, come on!

Look, I get the draw of trying to re-imagine some of the female personalities in the Bible. Hell, I’ve written two poems that do exactly that (Naomi, and Eve). But I was trying to get into the heads of these women, not make up stories about them. Historical fiction about someone who was probably mostly fictionalized already, sounds like a bit of a stretch (which is probably why I don’t read religious fiction – Jewish or otherwise). And if the opening paragraphs are that badly written, what could I expect from the rest of the book? Just in case, I also looked at some of the Goodreads and Amazon reviews and a couple of them mentioned some sex scenes that I can easily do without. Therefore…

NO this will NOT stay on my shelf!

If this does interest you, you can still find it via the following (affiliate) links: Amazon, Better World Books, eBooks.com, iTunes (iBook and iAudiobook), Alibris, and Kobo (eBooks and audiobooks).

Want to participate in Shelf Control? Here’s how:

What books do you have on your shelf that you haven’t read yet?