Top Five Tuesday was originally created by Shanah @ Bionic Book Worm, but is now hosted by Meeghan @ Meeghan Reads. To participate, link your post back to Meeghan’s blog or leave a comment on her weekly post.

This week, Meeghan gave us a FREEBIE!

It is hard to believe that 2022 is finishing so fast. In fact, I’m already preparing my “best of 2022” post, which wasn’t easy to do. But for this freebie, I though that instead of looking back I’d look forward. So, without any further ado, I give you…

“Strangers in the Night” by Heather Webb. According to Goodreads, this is a novel about the love affair between Frank Sinatra and Eva Gardner. One might say that their relationship was the embodiment of the plot for “A Star is Born,” where one of the couple is on the raise to fame, while the other one is facing slumps in their career. Although they were more my mother’s contemporaries, I grew up listening to Frank, and seeing Eva’s films, so of course I want to read this biographical, historical fiction novel! I’ve requested the ARC via Edelweiss, so we shall see if I get it before it is released on March 21, by William Morrow & Co.

“The Fifth Avenue Glamor Girl” by Renée Rosen. According to Goodreads, “It’s 1938, and a young woman selling face cream out of a New York City beauty parlor is determined to prove she can have it all. Her name is Estée Lauder, and she’s about to take the world by storm…” Okay, something you might not know about me, but in my youth, I worked five years for (the now, mostly defunct) Helena Rubinstein – yes, the cosmetics company. Estée Lauder was another of the companies that was huge when I was young, and since both women were Jewish, I couldn’t help but admire them. (We won’t go into what I think of Estée’s son, however.) This is supposed to be released on April 25, and while I’ve asked for the ARC via Edelweiss, it is published by the notorious Berkeley, so… I might have to buy a copy!

“The Last Lifeboat” by Hazel Gaynor. According to Goodreads, “Inspired by a remarkable true story, a young teacher evacuates children to safety across perilous waters, in a moving and triumphant new novel from New York Times bestselling author Hazel Gaynor. … “ You know, there are very few authors who find those little nooks and crannies about WWII that no one’s ever shined a light upon before – Hazel is special that way! The release date for this novel is June 23, and I’ve yet to see this available on either NetGalley or Edelweiss. Once again, it is published by the notorious Berkeley, so… I better start saving up my pennies for this one as well!

“Staring Adele Astaire” by Eliza Knight. You know, before I read Knight’s “The Mayfair Bookshop” the novels she had published were all far too romantic for my taste. But now that she seems to have started in on biographical, historical, women’s fiction, I’m chomping at the bit to read her books. And if she’s going to write about the amazing Adele Astaire (yes, I did read another novel about her, but so what), then I’m going to be stalking this one as well. This is supposed to be released on June 3, from William Morrow – Harper Collins, so although I haven’t seen this one on Edelweiss or NetGalley yet, hope springs eternal (and, having spent a week with her in July, maybe she can give her publishers a nudge to give me the ARC). 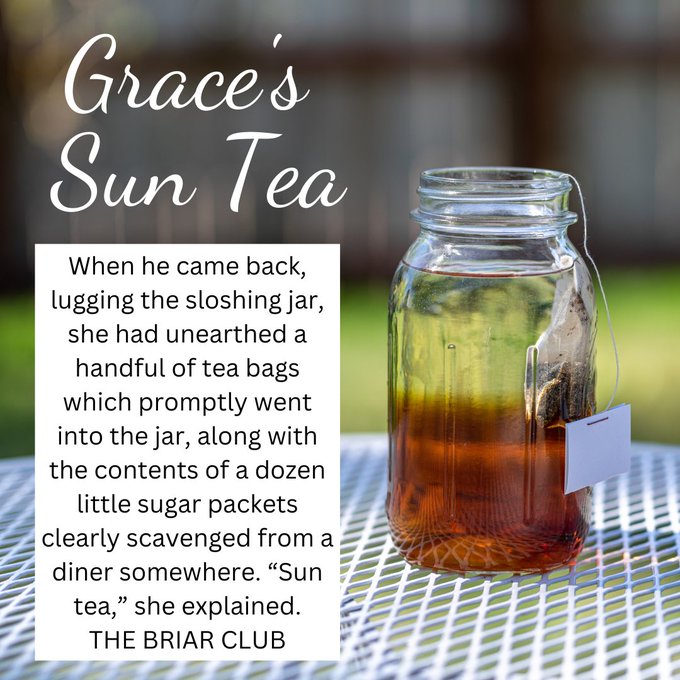 “The Briar Club” by Kate Quinn. Okay so, according to my snooping, Kate’s newest novel is due out sometime in March of 2023, but I’m starting to have my doubts it will become available before June. There’s no synopsis I can find, and not even a book cover for it yet, but… Kate Quinn!!! You hear me, right? All I know is what Kate has been teasing us with on Twitter, such as “Did you know that my upcoming book #TheBriarClub is going to have recipes included? Starting with a certain new boarder’s sun tea brewed on her sunny windowsill…” Oh, doesn’t that sound lovely already? Now, I’m not sure if this book is about the famous fancy place in Texas or not, but… sun tea? That’s a southern treat, so it could be, right? (Disclaimer: this picture was stolen by me from Kate’s Twitter account!)

What 2023 books you looking forward to reading?