Book Review for “Jacqueline in Paris” by Ann Mah.

Summary: “In August 1949 Jacqueline Bouvier arrives in postwar Paris to begin her junior year abroad. She’s twenty years old, socially poised but financially precarious, and all too aware of her mother’s expectations that she make a brilliant match. Before relenting to family pressure, she has one year to herself far away from sleepy Vassar College and the rigid social circles of New York, a year to explore and absorb the luminous beauty of the City of Light. Jacqueline is immediately catapulted into an intoxicating new world of champagne and châteaux, art and avant-garde theater, cafés and jazz clubs. She strikes up a romance with a talented young writer who shares her love of literature and passion for culture – even though her mother would think him most unsuitable. But beneath the glitter and rush, France is a fragile place still haunted by the Occupation. Jacqueline lives in a rambling apartment with a widowed countess and her daughters, all of whom suffered as part of the French Resistance just a few years before. In the aftermath of World War II, Paris has become a nest of spies, and suspicion, deception, and betrayal lurk around every corner. Jacqueline is stunned to watch the rise of communism – anathema in America, but an active movement in France – never guessing she is witnessing the beginning of the political environment that will shape the rest of her life—and that of her future husband.” 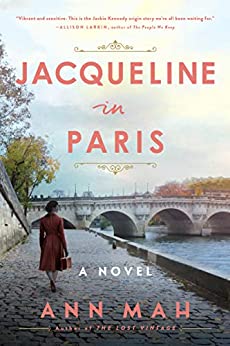 After being angry with Gill Paul for portraying Jackie Kennedy as a stupid, sniveling, wallflower (in her novel “Jackie and Maria” which I DNF), I was happy to see that Mah was writing about the woman Jackie was before JFK, when she spent a year in Paris studying. I was even more pleased that the side we see here is one of a studious woman, full of wonder and the joy of the first time she’s a truly, independent woman, out from under her family’s watchful gaze. Moreover, she is a young woman who is just starting to see what she wants, and beginning to figure out how she may be able to shape her own life. Obviously, her youth is both in her favor while also being a bit of a liability. That, combined with having come from a mostly sheltered life (but not one of the levels of wealth she eventually married into), makes this a particularly interesting period of her life to delve into.

Mah decided to tell this story in first person, with indications that this is a fictional memoir. By that I mean that although essentially, the story is told in past tense, most of it felt like accounts of relatively recent events. And yet, there were times when Jackie also noted that she was looking back on this period of her life from many years later. This might just be me, but while it didn’t disturb my reading of the book, it did feel a tiny bit inconsistent. Also, it isn’t until the end of the book when you understand at what point in time in her life Jacqueline is supposedly telling the story of this year of her youth. Admittedly, the last line of this book did have me almost choke up, but it was very fleeting.

Now, a memoir – fictional or real – is only interesting if something extraordinary happens to the person in question. Aside from this experience being the time when Jackie truly “came of age” we also have a love story here. Note I’m not calling this a romance, because although Mah gives Jacqueline a love interest here (named Jack, but not JFK), I found this to be a story of how a young woman fell truly and deeply in love with France, and Paris in particular. However, even with her tryst with Jack, this wouldn’t really be enough to make a story all that interesting. Well, at least not for me. I mean, I like Paris and France, but I’m not in love with it. Thankfully, Mah brings in another element, which was wholly unexpected. That was a level of intrigue. Remember, in post-War Europe, the Soviets were still hanging about, trying to spread communism. Adding the element of spies to the story almost turned this novel into a thriller. And since Jacqueline actually worked for a short while with the CIA after returning from France, this didn’t seem at all far-fetched.

All told, I’m so glad that Mah concentrated on this period of Jackie’s life, because from what I can see, all the other biographical fiction books (and biographies, for that matter) seem to only concentrate on her life with JFK, or her life immediately after his assassination, or her life with Onassis. I believe that Mah really got to the essence of who Jacqueline Bouvier really was, on her own, as an independent woman. Not to mention how beautifully Mah describes all the places and the foods that Jackie experienced with such lovely, expressive prose (which I already knew she could do from her previous books). This is why I am warmly recommending this book, and giving it a healthy four and a half stars out of five (it almost got just four, but that little lump in my throat at the end made it worthy of another half star).

Mariner Books released “Jacqueline in Paris” by Ann Mah on September 27, 2022. This book is available (via the following affiliate links) from Amazon, Foyles, The Book Depository UK and Book Depository US (both with free worldwide delivery), Waterstones, WHSmith, Wordery UK and Wordery US, Kobo US (eBooks and audiobooks), the website eBooks.com, Booksamillion.com, iTunes (iBooks and audiobooks), new or used from Alibris, used from Better World Books (promoting libraries and world literary), as well as from as well as from Bookshop.org and UK.Bookshop (to support independent bookshops, especially during the COVID-19 pandemic) or an IndieBound store near you. I would like to thank the publishers for sending me an ARC of this novel via Edelweiss.

5 thoughts on “American Icon in Paris.”