Book Review for “Marrying the Ketchups” by Jennifer Close.

Summary: “Here are the three things the Sullivan family knows to be true: the Chicago Cubs will always be the underdogs; historical progress is inevitable; and their grandfather, Bud, founder of JP Sullivan’s, will always make the best burgers in Oak Park. But when, over the course of three strange months, the Cubs win the World Series, Trump is elected president, and Bud drops dead, suddenly everyone in the family finds themselves doubting all they hold dear. Take Gretchen for example, lead singer for a ’90s cover band who has been flirting with fame for a decade but is beginning to wonder if she’s too old to be chasing a childish dream. Or Jane, Gretchen’s older sister, who is starting to suspect that her fitness-obsessed husband who hides the screen of his phone isn’t always “working late.” And then there’s Teddy, their steadfast, unfailingly good cousin, nursing heartbreak and confusion because the guy who dumped him keeps showing up for lunch at JP Sullivan’s where Teddy is the manager. How can any of them be expected to make the right decisions when the world feels sideways–and the bartender at JP Sullivan’s makes such strong cocktails?” 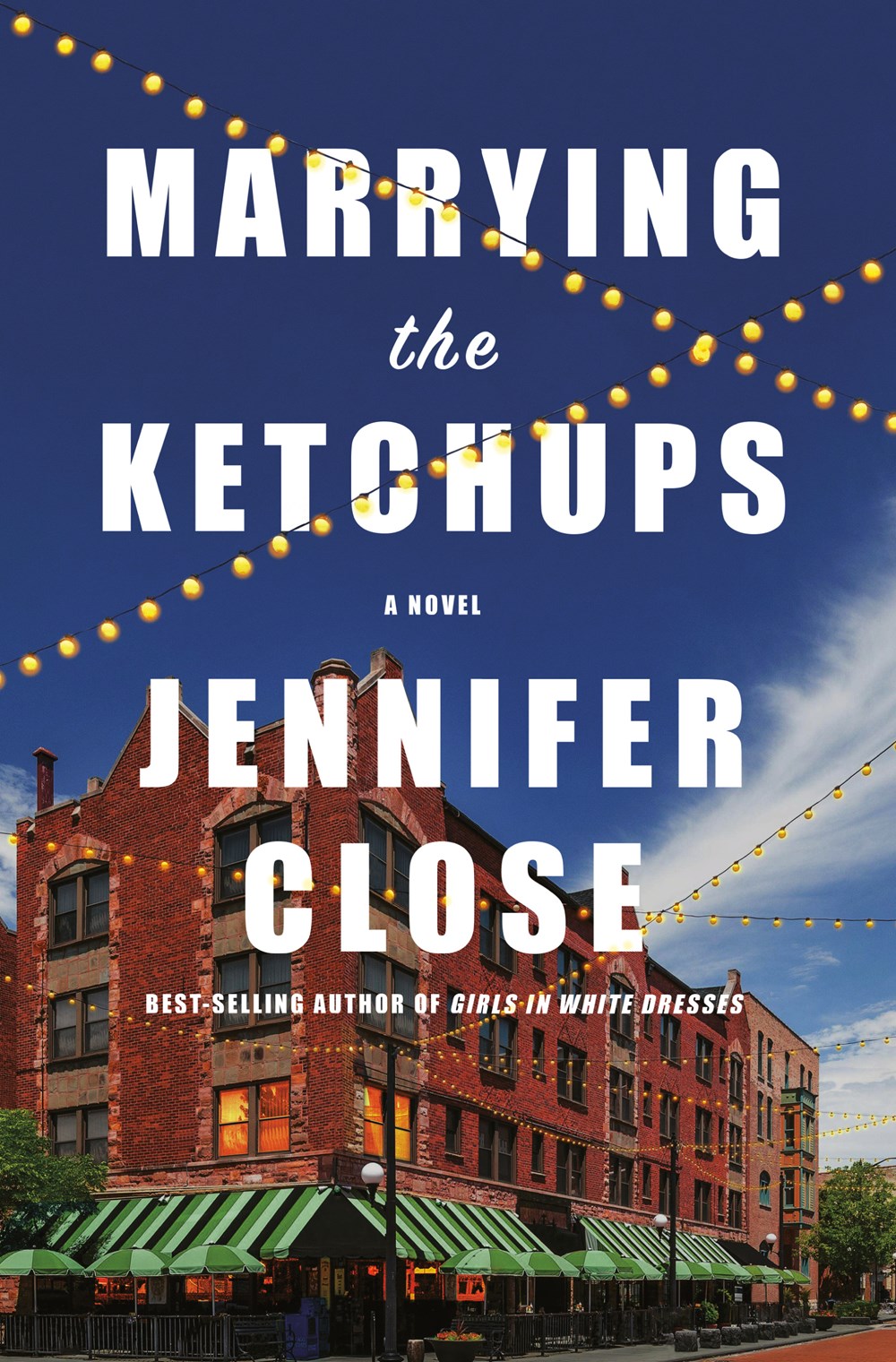 If you’ve ever worked in a restaurant to cafeteria in America, you might have heard the phrase “marrying the ketchups.” For those who don’t know, this is the term used for when you take a mostly empty ketchup bottle and put its leftover contents into a bottle that is mostly full. Now that I’ve confirmed this, you probably also now know that there’s nothing in this book about people who marry into a family whose name is Ketchup. You’ll probably also realize that this title is a metaphor. Interestingly enough, I thought the idea clever, and it does come up in the narrative later in the book. The thing is, I’m not sure what Close was trying to get at with this. See, the process is that you empty one bottle in order to make the mostly full one look brand new. Is Close trying to say that it is okay to just discard something (or someone) after we’ve milked it dry? Hm…

In any case, I’m of two minds about this book. On the one hand, I found it well written enough to finish reading it, but there were a few things that disturbed me about the story. First, I felt like the timelines here were a bit on the erratic side. Close moves from one character to another in this family, while every so often taking us back to the day when the Chicago Cubs won the World Series in 2016. Then, with that character, Close goes on to tell more of the story from (I believe) the point where previous character’s part ended. It isn’t easy to explain, but imagine going back to November 2, 2016 and then each consecutive story jumping ahead a bit further in time, with each subsequent character – in a sort of ever-widening circle, ripple effect. The concept is actually quite good, and is less confusing than it sounds, but it did make the overall flow of the story a bit of a bumpy ride for me.

I also noticed that this book has been described as being a humorous novel, where even Goodreads calls it “Outrageously funny and wickedly astute.” Now, you have to understand that I could really use a good laugh these days (can’t we all, for that matter), and that was the main reason why I requested this novel. See, I’ve never read Close before so I was hoping to get something that would make me laugh, but I’m sorry to tell you that this isn’t what I got. Admittedly, I quickly realized that I’m probably not the target audience for this novel, being easily 30 years older than the oldest of the main protagonists. Still, comedy is comedy and I was hoping for at least a few giggles along the way. Instead, I found these stories to be a bit sad, overall. All these break-ups and problematic internal family relationships just weren’t funny to me, however maybe people in their 30s would find them more amusing than I found them to be.

This isn’t to say that this isn’t a good novel, because I did enjoy it, even if I didn’t think it was funny. I mean, there was actually one bit where I choked up and almost shed a tear, which is the reason why I will still recommend this book. Personally, if the book had ended with that scene, I would have rated this novel higher. Overall, I truly appreciated Close’s writing style, which was sharp, but not harsh. I think this novel would be perfect for readers in their 30s and 40s, and it would help if they are die-hard Cubs fans (like I am) as well, but I don’t think that’s a prerequisite. For all this, I’m going to give this book three and a half stars out of five, and hope it gets into the hands of the right, and appreciative audiences.

Knopf will release “Marrying the Ketchups” by Jennifer Close on April 26, 2022. This book is available (via the following affiliate links) from Amazon, Foyles, The Book Depository UK and Book Depository US (both with free worldwide delivery), Waterstones, WHSmith, Wordery UK and Wordery US, Kobo US (eBooks and audiobooks), the website eBooks.com, Booksamillion.com, iTunes (iBooks and audiobooks), new or used from Alibris, used from Better World Books (promoting libraries and world literary), as well as from as well as from Bookshop.org and UK.Bookshop (to support independent bookshops, especially during the COVID-19 pandemic) or an IndieBound store near you. I would like to thank the publishers for sending me an ARC of this novel via Edelweiss.

5 thoughts on “A Bottled Family.”

A Book. A Thought.