#SixforSunday was a little blog feature Steph @ A little but a lot started in June 2017 for herself. It’s a weekly blog post where you get to share 6 books which fill a certain prompt. Originally, #SixforSunday was a post Steph did that she never thought she would stick with! It was her place to share 6 bookish things under a given prompt. (If you want to see her first post, you can check it out here!) She started it thinking it would fizzle out and that she would run out of things to use as prompts: She never imagined that it would transform itself into something OTHER PEOPLE JOIN IN WITH every week. For further details of the rules and links to the prompts for this meme, please visit Steph’s blog here. (Don’t forget to follow and tag Steph alittlebutalot on Twitter and Instagram – @eenalol – if you join in! Also, I made this little banner for this prompt, using graphics from her blog. I hope Steph likes it!)

This week – October 24, 2021 – the topic celebrates the UK’s Black History Month with:
Black Authors I want to read.

I don’t usually pay attention to the race of an author before I read their books, I’m more interested in the genre and subject matter. But once in a while I will notice, if the genre and the subject matter fit my tastes. For example, I’ve had Zadie Smith on my radar for quite some time, but I only recently read one of her books – albeit a collection of her short stories. Some Black authors sound good, like Octavia Butler, but I’m really not into her fantasy magical genre. There are many Black poets I’ve read, like Maya Angelou and Langston Hughes, but I’ve never read any of Angelou’s autobiographies, or any of Hughes’ fiction. With more #OwnVoices books coming out these days, there are even more Black authors I’d like to read. So, without any further ado…

6 – Brit Bennett – when her book “The Mothers” showed up on Edelweiss and NetGalley, I tried to get the ARC, but was denied. By the way, I didn’t know she was Black when I asked for the ARC, and that changed nothing for me. I’m not as sure about her subsequent novel, “The Vanishing Half” however.

5 –  Ta-Nehisi Coates – I’ve heard him interviewed on several talk shows, and I think he’s eloquent and intelligent. Yes, I know he’s written mostly fantasy (Black Panther), but he did write a literary work, The Water Dancer, and I wonder what that is like!

4 – Colson Whitehead – I’ve heard marvelous things about his books, but frankly, I’m a bit worried about the hype. Maybe I’ll start with something he wrote before he became a household name.

3 – Alice Walker – I’ve only seen the movie The Color Purple, but I’d love to read the book, and I know that’s not the only thing she’s written. Someone just reviewed her Meridian for the 1976Club, for example.

2 – Toni Morrison – my sister loves her books, and she’s recommended her “Beloved” to me. It does sound good, but there are others that sound even better – like The Bluest Eye!

1 – James Baldwin – I just won his “Giovanni’s Room” and I’ve put it on my Classics Club Spin #28, but I might read it anyway if it doesn’t come up in the lottery. 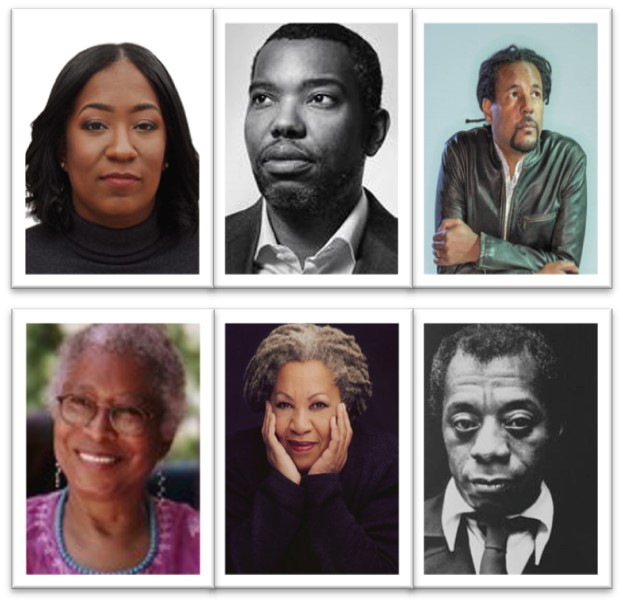 What about you? What Black authors do you want to read?