Summary: “Strout’s iconic heroine Lucy Barton, of My Name Is Lucy Barton, recounts her complex, tender relationship with William, her first husband–and longtime, on-again-off-again friend and confidant. Recalling their college years, through the birth of their daughters, the painful dissolution of their marriage, and the lives they built with other people, Strout weaves a portrait, stunning in its subtlety, of a decades-long partnership. A masterful exploration of human empathy, Oh William! captures the joy and pain of watching children grow up and start families of their own; of discovering family secrets, late in life, that rearrange everything we think we know about those closest to us; and the way people live and love, despite the variety of obstacles we face in doing so. And at the heart of this story is the unforgettable, indomitable voice of Lucy Barton, who once again offers a profound, lasting reflection on the very nature of existence. “This is the way of life,” Lucy says. “The many things we do not know until it is too late.”” 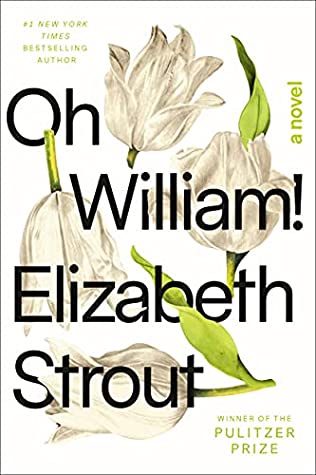 I think I already admitted that I wasn’t as impressed as everyone else with Strout’s “Olive Kitteridge” but I really enjoyed the two books she wrote with Lucy Barton (“My Name is Lucy Barton” and “Anything is Possible”) as her main protagonist. Obviously, when I heard that she was publishing a third book with Lucy, I had to get ahold of it – either as an ARC or in print. Well, surprisingly enough, after being denied the ARC on both NetGalley and Edelweiss, the publisher approached me directly and offered me the ARC (not because I reviewed the other books, but rather because I enjoyed a Taylor Jenkins Reid novel. Go figure)! Thankfully, this jut fit into my reading list and although was itching to start reading it right away, I had to wait and read others first. That’s why I only got to it review it now, on publication day! So, with that out of the way, let the festivities begin.

To begin with, I must say that this novel will not disappoint those who read and loved the previous two Lucy Barton books. In fact, I think that most readers will find it even more compelling than those two, because of how it feels so very personal and intimate. You see, this book feels like Lucy is talking directly to her readers, as if she’s written a type of memoir or journal, and allowed us access. In fact, some of the prose here is practically conversational. For example, there are things she repeats several times throughout the story, as if she doesn’t remember if she’s told you about them before. Surprisingly, this isn’t at all annoying. Another example is how sometimes, when Lucy is telling us about something that might have some significance to her life, she’ll stop in her analysis of the event and just say “I don’t know.”

Obviously, this usually means that Lucy is not the most reliable of narrators, and yet, her honesty about certain things often contradicts this. For example, when one of her daughters accuses her of being self-absorbed and not thinking of others, this leads Lucy to review some of her actions in order to see what she’s done and said that proves her daughter right. Furthermore, there are times when Lucy thinks carefully about what she says or does in a difficult situation, before she acts or speaks. These thought processes make us believe that maybe Lucy’s daughter isn’t totally correct in her assessment of her mother, but rather that this daughter doesn’t see how much Lucy does think of the people around her, particularly those closest to her. I would also like to point out that Lucy’s widowhood, and how she describes her love for her husband, takes on yet another perspective as we see how Lucy reacts and acts with William, whom she left and divorced because of his infidelity.

All of this is just to say that if you thought you knew Lucy from the previous two books, you’ve got another thing coming (and that’s a good thing). I should also note that even though you could read this as a stand-alone, I would reading the previous two, since I think they’ll be missing quite a lot. I say this particularly regarding Lucy’s relationship with her mother, brother, and sister, which enter this story as minor elements, but are the focus to the other two books. All that said, and while some things made me chuckle at the humanity of all of these characters, I’m afraid that Strout didn’t make me cry. Because of this (and I don’t want to expand on that because I think it should have done, but because… spoilers), I’m going to very warmly recommend this book but I think it gets a 4.75 star rating, rounded up to five for all other intents and purposes.

Random House released “Oh William!” by Elizabeth Strout on October 19, 2021. This book is available (via the following affiliate links) from Amazon, The Book Depository UK and US (free worldwide delivery), Foyles, Waterstones, WHSmith, Wordery UK and US, Walmart (Kobo) US (eBooks and audiobooks), the website eBooks.com, Booksamillion.com, iTunes (iBooks and audiobooks), new or used from Alibris, used from Better World Books (promoting libraries and world literary), as well as from as well as from Bookshop.org and UK.Bookshop (to support independent bookshops, especially during the COVID-19 pandemic) or an IndieBound store near you. I would like to thank Michael Hoak for inviting me to read this novel, and giving me the ARC via NetGalley.