Book Review for “In the Crypt with a Candlestick” by Daisy Waugh.

Summary: “Sir Ecgbert Tode of Tode Hall has survived to a grand old age—much to the despair of his younger wife, Emma. But at age ninety-three he has, at last, shuffled off the mortal coil. Lady Emma Tode, thoroughly fed up with being a dutiful Lady of the Manor, wants to leave the country to spend her remaining years in Capri. Unfortunately her three tiresome children are either unwilling or unable (too mad, too lefty or too happy in Australia) to take on management of their large and important home, so the mantle passes to a distant relative and his glamorous wife. Not long after the new owners take over, Lady Tode is found dead in the mausoleum. Accident? Or is there more going on behind the scenes of Tode Hall than an outsider would ever guess?” 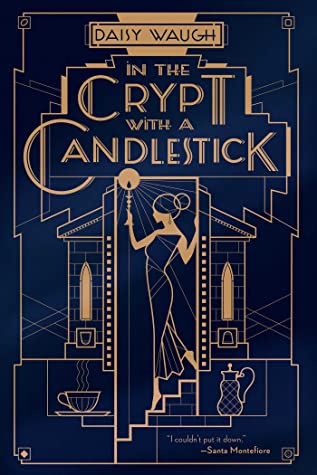 Many years ago, I wrote a review of the Daisy Waugh novel “Melting the Snow on Hester Street” and, well, I wasn’t terribly nice about it, because she got a whole lot wrong about Jewish things (sorry about that, but it is a pet peeve of mine). However, I recall appreciating and enjoying her writing style, so despite the problems with that early work of hers, when I saw this book on Edelweiss (with what I surmised had nothing Jewish in it), I decided to ask for the ARC. Interestingly enough, what I didn’t know at the time was that a) this was first released in the UK in 2020, and b) this is the first of a series of cozy mystery novels. Well, fancy that! I also realized that the ARC I received is for the US edition, since this was already released in the UK last year. But no matter, I’m here to review this novel, and review it I will!

First of all, what fun! This is one of those easy-going, lighthearted books that make you smile from the first pages. Mind you, while it has been nominated for an award for humorous fiction, I have to say it isn’t your belly-laugh type of book. No, it is more charmingly amusing than outright funny. So, if you’re looking for hilarity, then this isn’t the book for you, but I’m sure you’ve already noticed the “Tode Hall” bit (instead of Toad Hall from Wind in the Willows). Well, she also gets silly with including the books about Tintin, but making him British instead of Belgian, having Tode Hall feature in them, and then changing Tintin’s dog to a teddy bear.

Mind you, murder is usually a very serious matter, so injecting some levity into a novel where death strikes suddenly, isn’t as easy as it sounds. That said, my regular readers know that I’ve read two of the Tessa Crichton murder mystery books, and they’re both very droll (and yes, I’d like to read more of that series). Obviously, the great Agatha Christie also succeeded in writing some comical bits into some of her novels, so it isn’t like this hasn’t been done. I guess that’s the definition of a cozy murder mystery, and this one fits the bill perfectly.

With this one, Waugh has set her story totally in the here-and-now, being 100% contemporary, including cell phones and the Internet and a touch of social media here and there. Even so, I have to admit that despite that, there was a slightly older-world feel to this novel. This could be because the Tode family are a full 12 generations of aristocracy, and well… there’s always a feel of something historical when it comes to the British nobility (especially if the readers are Americans). We’re also talking about landed gentry who, contrary to many today with such ancient roots, are not only the owners of vast acreage and a mansion (plus other buildings), they’re also able to secure goodly amounts of income to keep it all running sustainably. I guess there’s something about monied Brits in the country that just feels… more vintage than had this been located in some larger British (or Scottish, Irish, or Welsh, for that matter) city among less wealthy hosts that have no noble titles.

As for the plot here, one thing I wasn’t expecting was a ghost, but Waugh decided to give us one, and an unreliable one to boot! Now, my regular readers know I’m not a big lover of paranormal or magical things in novels, but you know what? I didn’t mind this one too much, mostly because she was funny, and Waugh gave her some really beautiful 1960s and 1970s clothes to wear. That aside, back to the plot, which seemed more silly than serious. First, it took about a third of the book for the dead body to show up and then it seemed that no one believed it was a murder and everyone’s lives just carried on as usual, while they waited for the inquest. We get no police inspectors or detectives anywhere near the crime scene, and we get almost no amateur sleuths. That one of the characters ends up solving the murder only happens near the very end of the book. Also, it happens so quickly, that it felt a bit rushed. Plus, the resolution was just a touch too convenient for my taste, but at least the mystery was solved.

In general, I did enjoy reading this novel, and I knew that Waugh could deliver some enchanting prose, so I’m glad I read it, despite some of the drawbacks. For me, it felt more like a portrait of modern-day gentry than a murder mystery with a ghost, which has its advantages. For all of this, I will recommend this novel for anyone looking for a good, fun, contemporary, cozy mystery. For me, I think for all this, it deserves a healthy four out of five stars.

Pegasus Books released “In The Crypt with a Candlestick” by Daisy Waugh (in the US) on October 5, 2021 (it was released in the UK in 2020). This book is available (via the following affiliate links) from Amazon, The Book Depository UK and US (free worldwide delivery), Foyles, Waterstones, WHSmith, Wordery UK and US, Walmart (Kobo) US (eBooks and audiobooks), the website eBooks.com, Booksamillion.com, iTunes (iBooks and audiobooks), new or used from Alibris, used from Better World Books (promoting libraries and world literary), as well as from as well as from Bookshop.org and UK.Bookshop (to support independent bookshops, especially during the COVID-19 pandemic) or an IndieBound store near you. I would like to thank the publishers for sending me an ARC of this novel via Edelweiss.