Book Review for “A Narrow Door” by Joanne Harris.

Summary: “It’s an incendiary moment for St Oswald’s school. For the first time in its history, a headmistress is in power, the gates opening to girls. Rebecca Buckfast has spilled blood to reach this position. Barely forty, she is just starting to reap the harvest of her ambition. As the new regime takes on the old guard, the ground shifts. And with it, the remains of a body are discovered. But Rebecca is here to make her mark. She’ll bury the past so deep it will evade even her own memory, just like she has done before. After all… You can’t keep a good woman down.” 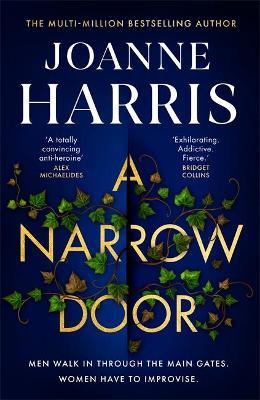 If anyone had told me that I would be following a series of psychological thrillers back in 2007 when I read the first of Joanne Harris’ Malbry/St. Oswald’s books, I would have laughed them out the door! Me? Seriously? A psychological thriller? No way. But actually… YES WAY! See, when I picked up “Gentlemen and Players,” I had no idea what I was getting into. Sure, I’d enjoyed a few Harris novels – some better than others. I even read a collection of short stories by Harris (which, well… to be honest, isn’t really her form). But none of those prepared me for a book that would slap me in the face like that one did. Granted, it took me a while to get to the second book “A Different Class,” and although her “Blueeyedboy” isn’t counted in this series (it does take place in Malbry, but not at St. Oswald’s), I only read that one very recently. But when I found out that this last Malbry book was being released, I pre-ordered it immediately (I didn’t see the ARC available anywhere). So yes, I did get hooked on a psychological thriller series, and here’s why.

Harris, through these books, has built an ecosystem that has just enough poison running through its veins that it doesn’t kill it, but does damage it enough to make a difference to how it exists. (Okay, that sounds elusive, I know, but like I did with my other reviews of this series, I have to be very careful to avoid any spoilers.) What makes this feel unique is how Harris sets out these stories – through first person narratives that are more like monologues directed towards another character in the book. But here’s the real genius about how Harris writes these speeches; it almost feels like the characters are speaking directly to the reader. It actually feels as if Harris breaks the fourth wall and allows her characters to interact with us – the readers – even though we know that’s not the case. So, even when we have unreliable narrators, Harris instills a very personal element into these accounts, which in turn, makes us sympathetic to the characters. Obviously, that’s the main reason we keep reading, even when one of the characters does something that appalls us.

Granted, I’m no connoisseur of psychological thrillers, but if you ask me, this feeling of being one-on-one with the characters is precisely the way one of these novels should be written. Because of that connection to the characters, when something surprising is revealed (which invariably will happen, if the author is doing their job correctly), you’re going to give out an “OMG” immediately. Harris likes to leave those moments for as close to the ending as possible. That way, you’re looking forward to it, but at the same time, you’re savoring every page; you’re reading on, both anxious and excited, while you’re trying to figure out what that shocking element will be. At the same time, you’ll be tallying up all the clues (and red herrings), and trust me, you’ll not guess that revelation. That’s a psychological thriller at its very best, and that’s the reward this novel and Harris gives us!

By the way, I noticed that in the previous two books, Harris liked to identify the speakers of the characters in each chapter through chess symbols. In “Gentlemen and Players” it was a white pawn (protagonist) and a black pawn (antagonist). In “Different Class” we get black and white king pieces. In this book, we get a queen and a king… interesting, right? Obviously, if I tell you which one is black and which one is white, the significance will be a spoiler so, I’ll not say. However, Harris doesn’t allow her protagonists to be totally good, nor her antagonists to be completely bad, which adds to the tension and understanding of how Harris crafted this story. So, that’s just another element of her literary virtuosity here. Which is all just to say that once again, Harris got me, hook, line, and sinker. In fact, if she writes another one in the series, I’ll not hesitate to read it! Clearly, I must wholeheartedly recommend this novel and the whole series and give it a full five out of five stars. (You probably should read the other two first – with or without “Blueeyedboy” – but you could also read each of them as a stand-alone books as well).

Orion Publishing Group released “A Narrow Door” by Joanne Harris on August 4, 2021 (in the UK, but it will only be released in the US on January 4, 2022 by Pegasus Crime). This book is/will be available (via the following affiliate links) from Amazon, The Book Depository US and UK (free worldwide delivery), Foyles, Waterstones, WHSmith, Wordery UK and US, Walmart (Kobo) US (eBooks and audiobooks), the website eBooks.com, Booksamillion.com, iTunes (iBooks and audiobooks), new or used from Alibris, used from Better World Books (promoting libraries and world literary), as well as from as well as from Bookshop.org and UK.Bookshop (to support independent bookshops, especially during the COVID-19 pandemic) or an IndieBound store near you.

6 thoughts on “She Who Schooled St. Oswald’s.”