Why I can’t write a Book Review for “Wicked” by Gregory Maguire.

Summary: “When Dorothy triumphed over the Wicked Witch of the West in L. Frank Baum’s classic tale we heard only her side of the story. But what about her arch-nemesis, the mysterious Witch? Where did she come from? How did she become so wicked? And what is the true nature of evil? … Wicked is about a land where animals talk and strive to be treated like first-class citizens, Munchkinlanders seek the comfort of middle-class stability, and the Tin Man becomes a victim of domestic violence. And then there is the little green-skinned girl named Elphaba, who will grow up to become the infamous Wicked Witch of the West, a smart, prickly, and misunderstood creature who challenges all our preconceived notions about the nature of good and evil.” 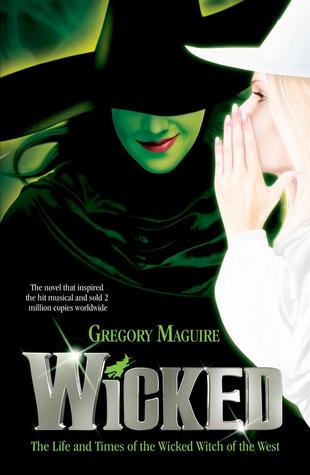 Let’s start at the beginning, shall we? One of my earliest and fondest memories of my father (and trust me, there aren’t that many of those), was his reading L. Frank Baum’s “The Wizard of OZ” to me as a child. We had this lovely, big book with beautiful illustrations, and – ham that he was – he used different voices for each of the characters.

Fast forward to a few years later. We were one of the first people with a color TV set, and I’ll never forget the airing of the movie on TV. I also remember that the actor Danny Kaye did an introduction to the screening where he explained to the viewers at home not to adjust their sets because the opening segments were supposed to be in black and white. Then he danced away along the yellow brick road. For several years, that was used before each yearly screening, and our family watched it faithfully every year.

Fast forward some more, and I’m now an adult who has recently purchased one of those new-fangled DVD players. Among the first films I purchased (for my kids, ostensibly) was a digitally remastered copy of this same movie (unfortunately, without the intro with Danny Kaye in the extras). Obviously, from all this, you can understand that this is a story that has been a significant part of my youth and young adulthood.

Now, we need to fast forward once again to a visit to London, where the brand-new musical “Wicked” is playing. Understandably, as lovers of musical theater, and my own personal history, the draw was already there, and we had to go see it. Although we found the production to be totally amazing visually, and the story to be interestingly twisty, if a bit difficult to follow, I found the music to be less than memorable (if I were to review musicals, I would probably rate it only about three to 3.5 stars out of five). Oh well… Still, I understood that the musical was based on a novel, and despite my disappointment in the show, I decided to buy the book, knowing full well that it was fantasy.

Long story short, I tried… I really tried to like this book. I really wanted it to fill in the blanks that I felt were missing in the musical’s book. Instead, what I found was so much background, so much history, so many extraneous details, and so many offshoots, that I was even more confused than before. While the writing was fine, it was also terribly bloated. We get introduced to so many minor characters and creatures that we can’t keep track of who is important and who is secondary. Furthermore, every new chapter seems to jump to something else or some other region of OZ that we didn’t even know existed. Even the map included in the book didn’t help with that.

Finally, the focus on all these other things was so scattered and confusing with jumps in the timelines and flashbacks, that I don’t believe I ever found out much more than the absolute basics about Elphaba and Glinda (or Galinda, apparently). Weren’t they supposed to be at the heart of this story? In the end, I think I got about 25-30% into the book when I finally gave up, frustrated and frankly, angry that such a tedious piece of fan fiction was made out of a beloved children’s story. That’s why I think I’m being generous to give it two out of five stars. (Obviously, there’s no way I am ever going to read any of his other books in this series. He burned his bridges with me with this book, I’m afraid.)

If I haven’t convinced you not to read this novel, this book is available (via the following affiliate links) from Amazon, The Book Depository (free worldwide delivery), Foyles, Waterstones, WHSmith, Wordery UK, Wordery US, Walmart (Kobo) US (eBooks and audiobooks), the website eBooks.com, iTunes (iBooks and audiobooks), new or used from Alibris, used from Better World Books (promoting libraries and world literary), as well as from as well as from Bookshop.org and UK.Bookshop (to support independent bookshops, especially during the COVID-19 pandemic) or an IndieBound store near you.