Summary: “Arthritic and immobilized, Poirot calls on his old friend Captain Hastings to join him at Styles to be the eyes and ears that will feed observations to Poirot’s still razor sharp mind. Though aware of the criminal’s identity, Poirot will not reveal it to the frustrated Hastings, and dubs the nameless personage ‘X’. Already responsible for several murders, X, Poirot warns, is ready to strike again, and the partners must work swiftly to prevent imminent murder. Poirot’s final case, a mystery which brings him and Hastings back to Styles where they first solved a crime together.” 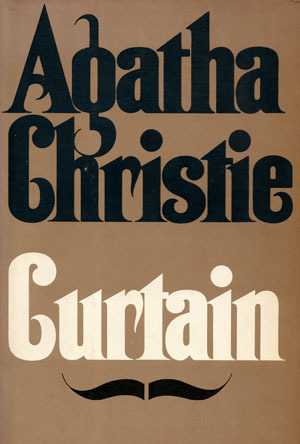 Trust Agatha Christie to come up with a truly original premise for a murder mystery novel, which I don’t think anyone else came up with before. Granted, I realize that I’m not a huge murder mystery reader, so perhaps others have done something similar (do correct me if I’m wrong). Even so, it seems to me that Christie’s trope here of an investigation to prevent a potential murder hasn’t been done to death (so to speak). The closest I can think of is the TV series “The Black List” and maybe that stupid film “Minority Report” are somewhat variations on that theme. But I doubt anyone has been able to match just how clever this novel is, even if they’ve tried. (Obviously, I have to be very careful to not give away any spoilers, so you’ll excuse my being a bit… vague here.)

To be honest, my favorite Christie characters are Tommy & Tuppence, and Miss Marple, so I’ve only read a few Poirot books. Of those I have read, what always gets me is just how adorable Poirot is, even in his being such an irascible curmudgeon, and such a fuss-budget. Despite this, his genius and how he imparts his insights just makes me smile. Despite his hard shell, he’s really a marshmallow underneath, and you want to give him a hug and pinch his cheeks, knowing full well he’d not appreciate it one bit! I also adore how Hastings bumbles along with each investigation, knowing his weaknesses and relying so much on Poirot to help him get to the bottom of things. Interestingly enough, this book turns the tables just a bit on this relationship, because Poirot is incapacitated, and needs Hastings to help get to the bottom of the conundrum.

Obviously, Christie knows how to pace a story with just the right amount of tension, perfectly scattered small climaxes, and little clues along the way that keep us turning the pages. Furthermore, the genteel way of her use of language, even when something feels sinister or dark, is imbued in every sentence. Plus, you can’t help having that Belgian accent going through your head while reading what Poirot is saying, even though she hardly writes it that way at all. There’s just no other way of saying it, even if it has been said millions of times; Christie was the Queen of Mystery in every way, shape, and form. Reading this book just reminded me of this, and also cemented in my consciousness that no matter how I try, I’ll never find another mystery writer who can equal her ability to draw us in and tell us a compelling story, with every twist she could think of, and every angle tied up with a perfect ribbon at the end of each book.

I should mention that even though this was published in 1975, I’m calling this vintage fiction, because of the blurb I found on Goodreads:

“Agatha Christie wrote it during World War II, as a gift for her daughter should she not survive the bombings, and it was kept in a safe for over thirty years. It was agreed among the family that Curtain would be published finally in 1975 by Collins, her long-standing publishers, and that Sleeping Murder (the Marple story written during the war for her husband, Max) would follow.”

In addition, the blurb also said: “The reception of Poirot’s death was international, even earning him an obituary in The New York Times; he is still the only fictional character to have received such an honour.” I didn’t know that, did you? Well, I know that my sister (as well as many other Christie fans) bought this book and held off reading it, while attempting to read all the other Poirot books first. However, she finally gave in, and then lent the book to me. Obviously, I’m so glad she did, because I loved this book, and nothing can stop me from giving this novel a full five out of five stars! Go ahead, you know you want to read it!

“Curtain” by Agathe Christie is available (via the following affiliate links) from Amazon, The Book Depository (free worldwide delivery), Foyles, Waterstones, WHSmith, Wordery, Walmart (Kobo) US (eBooks and audiobooks), the website eBooks.com, Booksamillion.com, iTunes (iBooks and audiobooks), new or used from Alibris, used from Better World Books (promoting libraries and world literary), as well as from as well as from Bookshop.org and UK.Bookshop (to support independent bookshops, especially during the COVID-19 pandemic) or an IndieBound store near you.

This novel qualifies for the following reading challenges: 20 Books of Summer 21 (#7 – instead of “The War Nurse” which I had to DNF).