From “Are You There, God? It’s Me, Margaret” by Judy Blume to “Mastering the Art of French Eating” by Ann Mah.

This month we celebrate 50 years since the publication of the iconic YA novel “Are You There, God? It’s Me, Margaret” by Judy Blume!

This month (December 5, 2020), the chain starts with this “Are You There, God? It’s Me, Margaret” by Judy Blume. This is a book that I have not read. Yes, I know, I’m Jewish, and I’m old enough to remember when this book was published 50 years ago (I was 13), and it was totally age appropriate for me to have read at the time. But I didn’t. And I don’t know why. Maybe I was turned off by the hype, and it being a huge, best-seller? Maybe I was waiting for someone to give me a copy for my Bat Mitzvah, and no one did? Looking at the blurb, I can tell you now that this might have been a very good book for me at the time, as it is all about fitting in and belonging (something I struggled with at that age). These are, of course, classic tropes for middle grade books, and I am certain I would have been able to identify with them. But I didn’t read it back then, and to be honest, I don’t feel the need to read it now. But, that’s just me!

Thinking back, I don’t think I’ve read any middle grade books, not as an adult, and not when I was that age. In fact, when I was that age, I’m not sure there was a MG category. That means I can’t really go down that path, so let’s try the title connection. I have just one book I’ve read with the word “God” in the title that I haven’t used for this meme, and that is “Ninety-Nine Stories of God” by Joy Williams. No, this isn’t some spiritual guidance book, or a new type of book of common prayer, or anything religious at all. Rather, this is a collection of fictional imaginings that border more on being fairy tales than anything else. It is a very quick read, where some of these are short vignettes, other practically flash fiction, and even some that are almost poem length. I think I surprised myself how much I enjoyed this book, and many of the stories were actually quite funny. You never know, right? 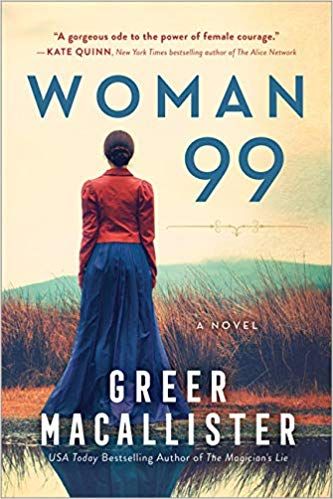 Keeping with the title connection here, I think the best next link would be “Woman 99” by Greer Macallister. This novel was Macallister’s third book (and I just finished reading (and reviewing) her latest novel, “The Arctic Fury”). Macallister likes to write books are about women who either end up in, or put themselves into dangerous situations. In “Woman 99,” the protagonist, Charlotte Smith, pretends to be insane to get herself admitted to the asylum where her sister Phoebe has been committed – much like the journalist Nellie Bly did. In fact, Macallister makes Bly into the inspiration for her what her protagonist ends up doing, which I thought was a very clever way to include a real person in a fictional tale. Mind you, there are some very unpleasant descriptions in this book, but they don’t detract from Macallister’s amazing writing.

Macallister always reminds me of Ariel Lawhon. I’ve followed both of these authors from their debut novels, they both write beautifully on fascinating subjects, and they seem to publish at about the same speed (Lawhon’s fourth novel was published earlier this year). In Lawhon’s book “I was Anastasia,” the link to Macallister’s book is pretending or attempting to deceive people. Macallister’s Charlotte Smith pretended to be insane. Half of Lawhon’s story is about Anna Anderson, the woman who tried to convince people she was Anastasia, a member of the Romanoff family of Russia, who miraculously survived the Bolshevik slaughter. Lawhon’s novel is a superb work that takes the Anastasia’s story forward until the family’s murder, while taking Anna’s story from the end and working backwards in time.

The Romanoff family were killed during the Russian Revolution, so the next link in my chain is to a book about another revolution, this time the French one, with the novel “The Last Banquet” by Jonathan Grimwood. Well, to be precise, pre-revolutionary France, and one Jean-Marie d’Aumout, a young aristocrat who is rescued from extreme poverty, rises to extreme wealth only to succumb to the ravages of the Revolution. Interestingly enough, what keeps this from being an ordinary saga of rags to riches to disaster, is that – as the title suggests – this is also a culinary fiction novel. While the book includes a few of d’Aumont’s original recipes (obviously fictional but they must have been based on real ones), is that you’ll probably not want to try most of them at home (snake? No thanks)! 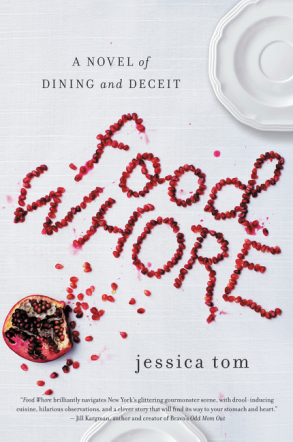 Grimwood’s novel isn’t just about food, as there’s also a good deal about d’Aumout’s sexual appetites in the book as well. That’s why my next link is to the novel “Food Whore” by Jessica Tom. Don’t worry, there’s no literal whoring in this novel. It is actually about a woman Tia, who is trying to make a career in the cut-throat world of food writing, and ends up ghost writing reviews of restaurants for a world-famous critic who has lost his sense of taste. I had no idea that food writing could be so competitive, but apparently, it’s just as bad as the world of fashion, making your run-of-the-mill murders sound almost tame! Back when I read this book, I heard that it might have been picked up to become a TV series, but I haven’t seen evidence of any progress. Too bad, I’m sure it would be as fun a series to watch as the book was to read. By the way, Tom is a chef in her own right, and has appeared on a few TV shows in that capacity. 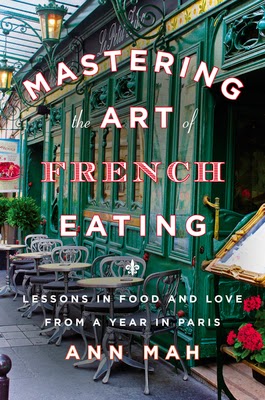 Which reminds me (ah, the link!) of the time I thought I saw gastronomy and travel writer Ann Mah on some TV game show where the contestant tries to guess which of the three people cooking for them is a real chef. Well, apparently I was mistaken and that wasn’t Mah at all, but no matter, because she got into my head, and that’s a good enough connection for me. And anyway, Tom writes about food writers, and Mah actually is one. I’ve read two of Mah’s books – one fiction and one non-fiction. Since Non-Fiction November has just ended (where I didn’t read any), I’ll give that a nod to that by linking to her “Mastering the Art of French Eating”. This truly delightful travel and culinary memoir details Mah’s stay in France, traveling around the country and trying local specialties of the various different regions (with recipes, yes). By the way, Mah wasn’t supposed to be there on her own. Her new husband – a diplomat – was originally stationed in Paris when he was suddenly called away to Iraq, where she couldn’t join him. So why not eat and write a book to wile away the time, right? I, for one, am glad she did just that!

What I think links these two books is displacement. Neither Margaret nor Ann asked to move their lives to somewhere else, and they each have to find a way to live with that upheaval. Not bad, eh?