Book Review for “The Berlin Girl” by Mandy Robotham.

Summary: “Berlin, 1938: It’s the height of summer, and Germany is on the brink of war. When fledgling reporter Georgie Young is posted to Berlin, alongside fellow Londoner Max Spender, she knows they are entering the eye of the storm. Arriving to a city swathed in red flags and crawling with Nazis, Georgie feels helpless, witnessing innocent people being torn from their homes. As tensions rise, she realizes she and Max have to act—even if it means putting their lives on the line. But when she digs deeper, Georgie begins to uncover the unspeakable truth about Hitler’s Germany—and the pair are pulled into a world darker than she could ever have imagined…” 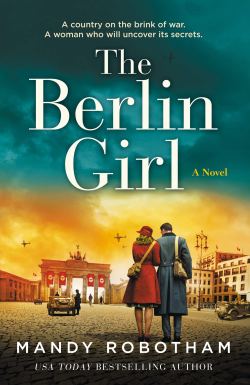 Admittedly, it is getting harder and harder to find new angles to compose WWII fiction novels, but every once in a while, an author discovers a niche that seemingly, has yet to have been explored. This is exactly what Robotham has done with this novel. To be precise, Robotham concentrates on only Berlin and specifically from 1938 until just before England declared war on Germany on September 3, 1939. Robotham then takes two unseasoned reporters, and drops them in the middle of this turbulent time. In addition, she gives these two just enough savvy to understand the subtle differences between the full, real truth and what came out of Hitler’s propaganda machine who spun facts with their own version of reality. Robotham also throws in some intrigue and the first shadows of the resistance, to build up the tension, together with a touch of romance added in to sweeten the pot. By the way, thankfully Robotham doesn’t ignore the plight of the Jews in this novel, and includes one family – the Ansel family – to remind us how the incipient antisemitism grew from simple prejudice to the first steps towards decisive action plans, aimed to rid Nazi Germany of the Jews.

Now I know I said two reporters, but I definitely got the feeling that this was more Georgina’s (aka Georgie, aka George) story than it was Max’s story, which was fine by me. Told in third person, Robotham takes a birds-eye view of all these characters, with a level of intimacy that I found to be highly developed for that POV. At the same time, Robotham’s descriptions of Berlin and the surrounds are just evocative enough to set the scenes, and I had no trouble picturing the action.

I did, however, have a bit of a hard time envisioning Georgie herself, which is a touch odd. I get that she was blonde, and attractive, but aside from that, I didn’t get much else about her physically. This was strange for me, since I could easily picture all of the rest of the characters – both major and minor. This could be because Robotham seemed to be more in Georgie’s head than any other character, and obviously, she wasn’t a vain person, so she didn’t think all that much about her appearance (except when it was necessary for the story). This did distance me from Georgie a bit, which was a shame, since – as I said above – this really felt like her story.

I should also mention that for most of this book, the pacing of this story was on the slow side for me, especially considering what felt like a flurry of activity described. This was because, for the most part, Robotham doesn’t jump more than a few days (or a couple weeks, at tops) from passage to passage, which kept the tempo slow. The drawback to this was that I sometimes felt impatient for something to happen, and the tension wasn’t totally consistent. The advantage to this was that Robotham kept her relatively fast-paced climax until very near the end of the novel, which then takes you rushing to the conclusion, which I found to be very satisfactory, and a bit unpredictable. Now, I wouldn’t call this a twist, since the reader will see it coming, even if Georgie doesn’t.

Often one of the biggest problems with a novel that is meant to grab the reader with a real high point and a good deal of apprehension regarding the outcome, is that the ending lets the reader down. I’m pleased to report that this was not at all a problem with this novel. In fact, Robotham came up with a very clever way to recount the important things that happen outside the scope of her story, by adding on a handful of fictional newspaper articles that talk about the main characters. That was very impressive and creative, indeed. This all means that I think Robotham did a truly lovely job with this story, and I think I can very warmly recommend it to readers looking for a slightly different WWII story, with a very healthy four and a half stars out of five. This also means that I think I’m going to have to read her back-list novels (it’s a dirty job, but someone has to do it!)

Avon Books-Harper Collins released “The Berlin Girl” by Mandy Robotham on October 29, 2020 (in the UK, but will release it in the US on either December 1 or December 9, 2020). This book is (or will be) available (via the following affiliate links) from Amazon, The Book Depository (free worldwide delivery), Walmart (Kobo) US (eBooks and audiobooks), the website eBooks.com, iTunes (iBook or audiobook), new or used from Alibris, used from Better World Books (promoting libraries and world literary), as well as from as well as from Bookshop.org (to support independent bookshops, especially during the COVID-19 pandemic) or an IndieBound store near you. I would like to thank the publishers for sending me an ARC of this novel via Edelweiss.

14 thoughts on “Postcards from the Precipice.”