Book Review for “Why I Don’t Write and Other Stories” by Susan Minot.

According to Goodreads, this collection of short stories includes: A writer dryly catalogs the myriad reasons she cannot write; an artist bicycles through protests in lower Manhattan and ruminates on an elusive lover; an old woman on her deathbed calls out for a man other than her husband; a hapless fifteen-year-old boy finds himself in sexual peril; two young people in the 1990s fall helplessly in love, then bicker just as helplessly, tortured by jealousy and mistrust. 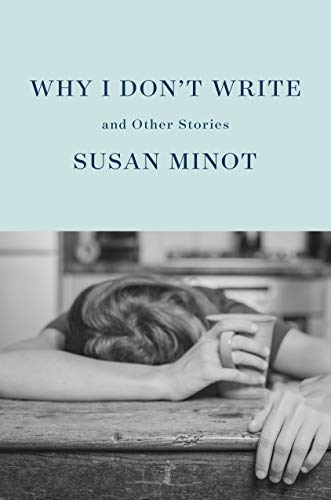 If you noticed, this blurb does summarize some of the stories here, but strangely leaves out two of the stories that stood out for me (not necessarily both of them in a good way). One of these is about a café/bar where the customers are all dead, and the other is about a college student who is sexually harassed by one of her professors. Those were the last two stories in this collection, the full list of which is:

Goodreads also says in the blurb that:

“In each of these stories Minot explores the difficult geometry of human relations, the lure of love and physical desire, and the lifelong quest for meaning and connection. Her characters are all searching for truth, in feeling and in action, as societal norms are upended and justice and coherence flounder. Urgent and immediate, precisely observed, deeply felt, and gorgeously written, the stories in Why I Don’t Write showcase an author at the top of her form.”

Okay, so… this is one of those books that I’m obviously just not smart enough to understand completely. Or maybe it is because I’m too literal a reader, because although I get the “deeply felt, and gorgeously written” parts, I didn’t get all of these stories. I certainly didn’t get the titular story, which just felt like a very random list of thoughts, written in the guise of excuses, and didn’t appeal to me at all. The third story, “Listen” also felt very arbitrary, in that it is mostly snippets of conversations, that sometimes seem connected, and at other times seem disjointed. Sort of like listening in on the discussions of different groups of people at a party. I also didn’t enjoy Café Mort at all, which is the one described above with the dead customers moving among the living. This oddly paranormal story set in what is supposed to be a real-life location with staff that are alive, made no sense to me at all. Again, I’m too literal a reader because I wondered how the dead customers were paying for their orders, and if they didn’t pay, how did this business survive, financially speaking?

The stand-out story for me was “Listen” in which an old woman on her death bed receives a visitor. This was one of those “precisely observed” stories that the blurb spoke about. This was probably the best crafted of all the stories included here, with just the right level of “punch” at the end when you are handed the twist which lets you understand what’s just happened. One of those “joys to behold” types of stories. It was also one of the stories that used conventional punctuation and diacritical marks, which is helpful. Some of these stories lacked that, and this could put some readers off those stories. That said, while I prefer not to in novels, I can handle reading short stories that have typographical irregularities, as long as the text makes it clear where the dialog begins and ends. Minot wasn’t consistent with this in these stories, and there were a few where I wasn’t sure what was being spoken and what wasn’t. There was also one story that might be a trigger for victims of sexual abuse or assault, which portrayed a trans person in a very nasty and unpleasant light. I have to say this bothered me because the only other “villain” in any of these stories was the college professor who never goes past uncomfortable, verbal innuendo.

With all this, I have to say that while some of the stories were enjoyably avant-garde, some of them were just… well… strange. Thankfully, there were others here that were simply very well-written, well-rounded, stories – a couple of which were truly excellent reads, and deserved 5/5 stars on their own. All of this makes for a fairly inconsistent collection, which I found to be unfortunate, because it seems to me that Minot is very talented, and I’d like to read more of her writings. I’d still like to recommend this book, but I’ll have to give this endorsement reservedly, with an average of only three out of five stars.

Knopf will release “Why I Don’t Write and Other Stories” by Susan Minot on August 4, 2020. This book is (or will be) available (via the following affiliate links) from Amazon, Barnes & Noble, Walmart (Kobo) US (eBooks and audiobooks), the website eBooks.com, iTunes (iBook or audiobook), The Book Depository (free worldwide delivery), new or used from Alibris, used from Better World Books (promoting libraries and world literary), or Thriftbooks.com, as well as from as well as from Bookshop.org (to support independent bookshops, especially during the COVID-19 pandemic) or an IndieBound store near you. I would like to thank the publishers for sending me an ARC of this novel via Edelweiss.

Words of Mystery
Kindle and Crochet

All about the Books and Crochet projects

A place to read my latest book reviews.

A Life Amidst Books

CURL UP AND READ

Books Chase Away the Blues

Reading Them and Writing Them

Travelling through books one page at a time