Book Review for “Her Last Flight” by Beatriz Williams.

Summary: In 1947, photographer and war correspondent Janey Everett arrives at a remote surfing village on the Hawaiian island of Kauai to research a planned biography of forgotten aviation pioneer Sam Mallory, who joined the loyalist forces in the Spanish Civil War and never returned. Obsessed with Sam’s fate, Janey has tracked down Irene Lindquist, the owner of a local island-hopping airline, whom she believes might actually be the legendary Irene Foster, Mallory’s onetime student and flying partner. Foster’s disappearance during a round-the-world flight in 1937 remains one of the world’s greatest unsolved mysteries. 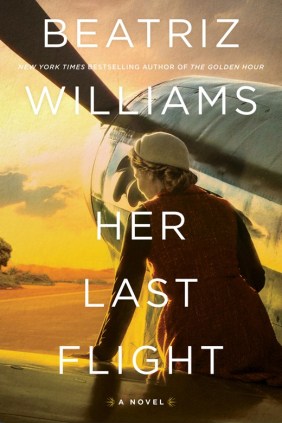 No this is not a veiled fictionalization of what might have happened to Amelia Earhart, whose body has never been found, even if there are many unmistakable parallels. Not the least of these is that both are aviatrixes who set lots of flying records, and both of whom disappeared while trying to set one more record. Furthermore, Sam Mallory isn’t some type of Charles Lindbergh, whose only thing in common with Mallory is that they were both daredevil pilots who had some pretty scary flying experiences. While obviously the inspirations for Williams’ book come from these two famous personalities, Williams truly drew characters who were totally unique, and with stories that diverge vastly from those we know of or have heard about these two famous people.

May I remind you all that when I read “The Wicked Redhead” by Williams, I said that her prose practically sparkled, and I got a good deal of this here as well. The tone Williams uses for Janey was actually also a bit on the irreverent side, which is something I enjoyed very much, making her feel a bit rougher around the edges. There were also several instances where Janey broke the “fourth wall” which I enjoyed, although I could have done without some of the foreshadowing. On the other hand, there were other parts of the story, particularly those that described Irene’s experiences, which felt more refined and sophisticated, but not at all stuffy. To be clear, this book is told by Janey but in two different ways. There’s Janey’s research and investigations into Irene and Sam, which are first person accounts, together with recollections and flashbacks to help fill in Janey’s own back story. These are the cheekily told bits. Then there are sections noted as being excerpts from a book called “The Aviatrix,” written by Janey (but where she’s called Eugenia Everett). These bits are the ones more courteously told.

Now, this sounds very much like a character-driven story, and it certainly does portray these two women as both flawed and extraordinary personalities; larger than life and yet ultimately human. However, there’s also a whole lot going on as well, and the basic motivation of discovering who Sam and Irene really were to write this book, becomes inexorably entwined with Janey’s own life, and the woman she’s become. The really wow factor, however, comes when Williams practically turns this into a mystery novel, with some plot twists that came from so far out of left field, that they blew me away. But don’t get me wrong, absolutely every turn here makes total sense. In fact, when Williams plopped these into my lap, it was like having a light-bulb go on in my head, and everything that came before it fell into a different, but very reasonable perspective. Furthermore, after the first bombshell, I suddenly had a bunch of questions. Then, before Williams could answer all of those, she sets off another next explosion, which only added to the excitement. All of this led to the last quarter of this novel being a real page-turner until the conclusion. Mind you, the pacing before these two discoveries was building very nicely all along, so no problem there.

As I noted, the only thing that sometimes struck me as a bit off was when Williams foreshadowed. This is a bit of a pet peeve with me, but thankfully there were only a small handful of these, and I only tutted about them a little bit before carrying on. So where does this put my assessment overall? To be honest, that little niggle was so easy to overlook, I really can’t discount my rating for them. I’d say that I genuinely enjoyed every bit of this novel, and I’m certain that it will appeal to a very wide audience – women, historical fiction lovers, mystery lovers, and even people who like thriller/adventure stories (because there’s a touch of those as well, with all the flying, crashing, and some surfing). Therefore, I have no choice but to give this my wholeheartedly warm recommendation with a well deserved five stars out of five! (PS: I should say I’m not crazy about the cover, but if that’s the only problem with this book…)

William Morrow – Harper Collins will released “Her Last Flight” by Beatriz Williams on June 30, 2020. This book is (or will be) available (via the following affiliate links) from Amazon, Walmart (Kobo) US (eBooks and audiobooks), the website eBooks.com, iTunes (iBook or audiobook), The Book Depository (both with free worldwide delivery), new or used from Alibris, used from Better World Books (promoting libraries and world literary), as well as from as well as from Bookshop.org (to support independent bookshops, especially during the COVID-19 pandemic) or an IndieBound store near you. I would like to thank the publishers for sending me an ARC of this novel via Edelweiss.

This book review qualifies for the following reading challenges: 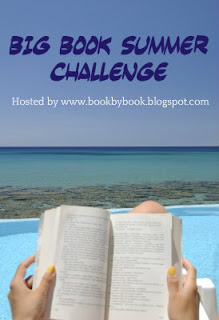 12 thoughts on “Perseverance and Survival.”