Book Review for “The First Emma” by Camille Di Maio. 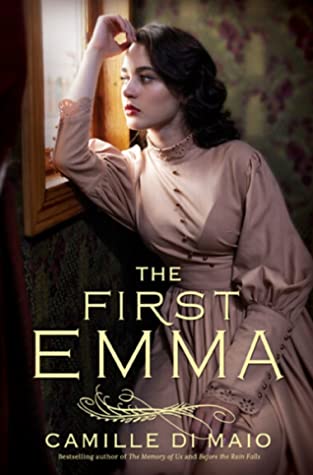 When Otto Koehler brought his brand-new wife Emma to San Antonio to run the beer brewery there, he was both very much in love and very ambitious. Thirty years later, Otto has been dead for many years – killed by one of his mistresses – and Emma is dying. Knowing this, she decides she needs to document her unusual story of how she – a woman – helped her husband build a dynasty of his own brewery, even with prohibition on the horizon. She also helped keep the business alive throughout the depression, all the while keeping scandal at bay. Out of all the applicants, she chooses to bring Mabel Hartley from Baltimore to help her in this task. However, Emma has more in store for Mabel than just taking dictation.

This is one of those fascinating biographical, historical fiction novels about a woman who proved to be an unsung hero, that essentially no one has ever heard about. In fact, according to the author’s notes, Di Maio had very little facts about Emma Koehler upon which to base this story. While that could have been a problem, it certainly must have been freeing at the same time. I mean, with so little in the public record about her, and no direct descendants to refute any inaccuracies, Di Maio had free range to let her imagination run wild, and the chance to build up a three-dimensional person out of the skeleton of information. If you ask me, it is an ideal situation, and Di Maio did a really lovely job taking full advantage.

To be specific, what we get here is a portrait of a crusty woman with warm marshmallow insides. She “gets” how business works almost intuitively, which makes her a good partner for an ambitious husband. Di Maio also paints Otto as someone who increasingly appreciates his wife’s abilities and intelligence, even as he loses interest in her as a wife. This enigmatic situation ends up being a bone of contention as well as a point of pride, which sets up just the right amount of tension between the two. All of this is recounted in retrospect by Emma as she dictates her memories to Mabel. In addition, with the introduction of Mabel to record Emma’s story, Di Maio also builds up a parallel storyline whereby Emma plays matchmaker between Mabel and her favorite (fictional) “nephew” (who is actually a cousin, but that’s immaterial). Interspersed between these two, Di Maio includes snippets from actual news articles surrounding Otto’s murder, his two mistresses, and the subsequent murder trial.

I have to say that the only thing that didn’t make much sense to me was the whole business about Emma being wheelchair bound, combined with the physical estrangement from her husband. Apparently, the truth was that Emma was actually in a car accident which almost paralyzed her, but that she did recover at least partially. Now, Di Maio uses Emma’s disability as not only the reason they hire the two nurses (both of whom were called Emma, hence the title of the book), but also an excuse for why Emma and Otto’s physical relationship died. While this does sufficiently explain why Otto has affairs with these women, the level of recovery that Di Maio describes makes me wonder if Di Maio didn’t play up Emma’s sexual attraction to Otto too much. I mean, either she was in too much pain and was never able to have sex with her husband, or she used the rehabilitation period as an excuse to end a part of her marriage that she didn’t welcome. It felt like Di Maio was unable to make up her mind about this, and tried to have it both ways, and that didn’t work for me.

However, despite this bit, I really enjoyed how Di Maio invented Mabel, and used her to help with the storytelling, while also being a romantic interest for Erik, Emma’s favorite relative. Now my readers know that I’m not into romance, but much as Di Maio did with her previous novel “The Beautiful Strangers,” the addition of the romantic interest never overtakes the rest of the story. In fact, I find that Di Maio likes to give these young women their own coming-of-age angle to their lives together with their finding love, which I appreciate. This means that these women aren’t just chasing after some hunk, but rather are understanding themselves better, which makes them more receptive to finding a real partner, not just a roll in the hay! (In fact, Di Maio’s books are almost prudish, when it comes to that, which is fine with me.)

Finally, I also liked how Di Maio didn’t ignore the era’s current events in this story, most of the action of which takes place in 1943, at the height of WWII. There are references to the war and its impact on those both at home and in the thick of it, as well as certain descriptions of clothing and the like gave enough atmosphere to feel just historical enough. I’d say that all told, I very much enjoyed this novel, and I think that I liked this much more than I did her previous novel (because thankfully, this one didn’t have any ghosts)! So, I’m going to warmly recommend it with a very healthy four and a half stars out of five, and put me on the list for her next book (as long as she stays away from anything paranormal)!

Wyatt-MacKenzie Publishing released “The First Emma” by Camille Di Maio on May 5, 2020. This book is available (via the following affiliate links) from Amazon, The Book Depository (free worldwide delivery), new or used from Alibris, and Better World Books, as well as from as well as from Bookshop.org (supporting independent bookstores) or an IndieBound store near you. I would like to thank the publishers for sending me an ARC of this novel via NetGalley.

9 thoughts on “Lady Bastion of Beer.”