Book Review for “Uncommon Type: Some Stories” by Tom Hanks 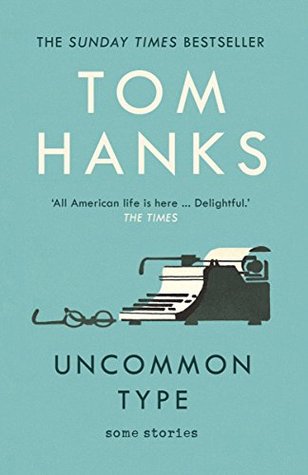 The blurb on Goodreads says that the stories in this book include “A hectic, funny sexual affair between two best friends. A World War II veteran dealing with his emotional and physical scars. A second-rate actor plunged into sudden stardom and a whirlwind press junket. A small-town newspaper columnist with old-fashioned views of the modern world. A woman adjusting to life in a new neighborhood after her divorce. Four friends going to the moon and back in a rocket ship constructed in the backyard. A teenage surfer stumbling into his father’s secret life.” As varied as these stories sound, the one thing each and every one of them have in common is that there’s mention of a typewriter. Now, sometimes the typewriter isn’t even secondary, or could even be considered tertiary, where in others the typewriter is essential to the story – so it is always there, in one form or another.

The seventeen stories here are:

You know, Tom Hanks has a very distinctive voice, and if he’s on TV in another room, I can identify that its him right away. Interestingly enough, when I started reading these stories, I could practically hear Hanks’ voice with the first story, very vividly – which made the first-person narrative just perfect, and very endearing. If there’s an audiobook version of this, I hope he does the narration – it wouldn’t sound right with anyone else reading it. That said, while I could still hear Hanks’ voice in “Christmas Eve” it was a touch fainter. This continued to diminish until the end of my reading of these stories, when I no longer heard only Hanks’ voice, with very little exception.

You’ll also notice right away that four of these stories have the same title with different subtitles (which are the exceptions to my not hearing Hanks’ voice). These four stories are written like newspaper articles. They actually look like they’re from a newspaper, all the way down to the double columns on each page. Furthermore, these are all told as if the writer, Hank Fiset, is speaking directly to his audience, much like a columnist might do. This set of four stories was very cleverly done and I could have had a whole book of just them, and been a happy camper. I also didn’t mind (and in fact, I really liked) that Hank Fiset once again made me hear Tom Hanks’ voice when I read them.

I should say that there were a couple of stories I didn’t care all that much for, to be totally honest. There was one that was sci-fi in nature, called “The Past is Important to Us” about time traveling back to the 1939 World’s Fair. Not that I don’t enjoy a good sci-fi story, but I don’t know… it just didn’t work well for me. Another one that I didn’t care that much for was “Stay with Us” which was written like a movie script. My biggest problem with this story was that I wasn’t sure what the point was, and I had a very hard time visualizing this one in my head – despite the action directions included.

On the other hand, I did appreciate how some of the characters in the first story reappeared in some of the other stories in this book. This made me feel that Hanks had an affinity for these characters, and knew them well enough to give them more exposure. It is often the case that when a writer likes their characters, they tend to write them more sympathetically, which comes through in these stories, making the reader like them as well. It also gave me the sense that had Hanks decided to write a novel, this cast of characters would have been a very good backdrop for that book.

All told, although there were some inconsistencies in these stories, the thread of the typewriter was a clever mechanic, together with the recurring characters in several of the stories, which also worked well. I’ve always said that a well-crafted short story is a joy to behold, and I think that with most of these Hanks succeeded in giving me some joy! Bravo Tom (and get well soon, to both you and Rita). I’ll give this collection a solid four out of five stars and recommend it warmly.

Penguin Random House (Arrow Books in the UK) published “Uncommon Type: Some Stories” by Tom Hanks in 2017. This book is available (via the following affiliate links) from Amazon, Foyles, WHSmith, Waterstones, Walmart (Kobo) US eBooks and audiobooks, the website eBooks.com, iTunes (iBook or audiobook), The Book Depository (free worldwide delivery), new or used from Alibris, used from Better World Books (promoting libraries and world literary), as well as from an IndieBound store near you.

4 thoughts on “Tales from the Font Lines – #ShortStorySunday”