Book Review for “The Lost Diary of M” by Paul Wolfe. 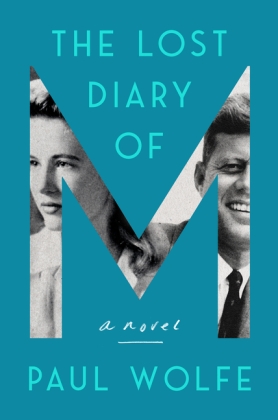 This book is written as if it is the diary of Mary Pinchot, an American painter who was murdered October 12, 1964, shot twice at close range, and whose death remains an unsolved mystery to this day. What makes her murder so significant is that she was also a woman who was rumored to have been President John F. Kennedy’s mistress prior to his assassination in 1963. The diary itself, if it ever really existed, apparently would have confirmed this affair, and it was therefore hidden from the public, if not destroyed. In this novel, Wolfe has decided to re-create (or maybe just invent), his own version of this infamous and elusive diary.

Okay, so let’s start off with my saying that I may be too young to read this book (and I’m 62 years old as of this writing). I very much recall JFK’s assassination and funeral, but I was only six-years-old at the time. Even though I lived through it, this isn’t an era in history I’ve read much about. Maybe this is why during many parts of the book I felt out of the loop with all the name dropping. Obviously, these people were well known in the early 60s, but I didn’t know who they were or their significance – politically or socially. Of course, some names were and still are very familiar to me such as Timothy Leary, Allen Ginsburg, and Marilyn Monroe (including a reference to her famous singing of “happy birthday, Mr. President,” to which Mary wasn’t a witness). That was all fine and good, and while I still felt somewhat clueless at times (and I later found out that not everyone mentioned in this book were real people), it was still very interesting.

However, it wasn’t long before things started to rub me the wrong way with this book. For example, Wolfe describes a scene where Mary has to convince a drunken Marilyn Monroe to leave the White House. In this scene, Wolfe had Marilyn talk about her ex-husbands, where she referred to them by their full names, including the ex-husband title, which felt a little strange to me. Even if the actor was drunk, would she really say “my ex-husband Joe DiMaggio” or “my ex-husband Arthur Miller”? Surely, she’d just refer to them as “Joe” and “Arthur,” wouldn’t she? The use of full first and names of these people happen throughout the book. Then, in another part of the story Wolfe has Mary start talking about a new encounter with another man, but here he gets referred to as only “C” and I immediately wondered why this person got such anonymity while some continued to be called by their full names, (even after their initial introduction)? Granted, not the worst thing in the world, but not ideal.

My main problem was that there were sections of this book where Wolfe made it sound like Mary wrote these things down in hindsight, where other sections felt like they were written contemporaneously. In fact, although the book opens with Mary saying that she was writing this after JFK’s death, I was about a third into this book when I began thinking I was mistaken, especially because she talks about her dreams of a future with JFK after he’s finished his presidency. Then, just when I was convinced that these must have been meant to sound like contemporaneous diary entries, BOOM there’s foreshadowing from one entry about something that happens in the very next entry, which takes place a couple days later.

Basically, what I’m saying here is that if this is supposed to be a diary, it would have felt more accurate if it read like one, but unfortunately, it doesn’t. For example, some of the scenes of events in the White House felt like I was reading a cross between an article in a high-brow fashion magazine like Vogue, and one you’d find in some cheap tabloid’s gossip column. By that I mean that there are paragraphs filled with lists detailing who was wearing what designer’s gown, along with when they said or did something scandalous or rude. On the other hand, the book is also riddled with about every conspiracy theory surrounding JFK that ever existed (including some that proved correct later on). On the positive side, I suspect that Mary’s ex-husband being CIA combined with her mysterious death, and the fact that the actual diary was never recovered (that I know of), made me think that there are some parallels in this book regarding things such as cover-ups and “black ops” that feel like they’re going on to this day.

While that sounds like Wolfe was writing an historical, biographical, fiction novel to be an allegory for our times, I’m afraid that wasn’t what I thought I was getting here. This is probably why this approach to Mary’s documenting her life didn’t work all that well for me. Despite this, there were still many parts of this book that I enjoyed a great deal. For example, the first few entries after the JFK assassination were very poignant. Whenever Wolfe reverted to those types of introverted entries, I was a very happy camper, but they left me wanting more of those, and less of all the other stuff.

That said, I think that many readers will enjoy this book much more than I did, if they like political, historical fiction that borders on intrigue and psychological drama, with some tabloid and fashion magazine asides along the way. Unfortunately, the number of times I thought “what?” or “huh?” or “really?” while reading this book has forced me to give it a rating of only three out of five stars, and it is only that high because of Wolfe’s extremely well-crafted and evocative language and writing style. In fact, I’d very much like to read more of his work, but this one… sorry! This just didn’t work for me. (However, after reading this book, I can promise you that if I ever get back to Dallas, I’m going to go back to The Sixth Floor Museum at Dealey Plaza, which is all about the JFK assassination. It is obvious to me from this book that I missed a whole lot on my first visit.)

Harper – Harper Collins will release “The Lost Diary of M” by Paul Wolfe on February 25, 2020. This book is (or will be) available (via the following affiliate links) from Amazon, Walmart (Kobo) US eBooks and audiobooks, the website eBooks.com, iTunes (iBook or audiobook), The Book Depository (free worldwide delivery), new or used from Alibris, used from Better World Books (promoting libraries and world literary), as well as from an IndieBound store near you. I would like to thank the publishers for sending me an ARC of this novel via Edelweiss.

5 thoughts on “A Sheepishly Pseudo Autobiography.”