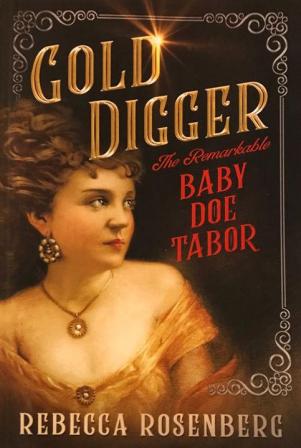 The Colorado Gold and Silver Rush of the late 19th century both made and broke many people. Among them was Horace Tabor, whose arduous efforts were eventually rewarded with his several successful silver mines, especially the “Matchless” mine, which was the richest silver mine in history. One less fortunate was Harvey Doe, who brought his beautiful wife Elizabeth (aka Lizzie) from Oshkosh Wisconsin to the hills of Colorado in hopes of striking gold. But when it was too much for Harvey, he abandoned his wife and went home. If it hadn’t been for the kindness of those in Leadville and Central City, Lizzie might have died that winter, but she survived. With her beauty intact, after earning her the nickname “Baby Doe,” she also came to the attention of almost every man she met, including Tabor.

Yes, this is yet another biographical, historical, women’s fiction novel. Also, once again I didn’t know anything about its main protagonist Baby Doe, or much about the mineral mining efforts in Colorado, except for what I remember from the famous musical “The Unsinkable Molly Brown.” Interestingly enough, from what I can tell from this novel and my Google searches, whoever wrote the story for that musical, stole much from Tabor’s life to make it seem more spectacular. (Apparently, Johnny Brown’s fortune didn’t come from striking it rich with a silver mine at all. I mean, seriously, where’s the drama in inventing a way to make mining safer, right?) But that’s all beside the point, because Tabor’s and Baby Doe’s stories were both filled with heaps of drama – both as individuals and as a couple.

Mind you, from what I do know about the real Molly Brown, and from what I read here and online about “Baby Doe,” the two of them had no small number of things in common. First of all, they both were poverty stricken in their early lives. They both ended up being very wealthy through the mining industry. They both used their wealth to help those less fortunate than themselves. They also lived in Colorado during about the same time. This made me think their paths must have crossed at one point or another, but there’s no mention of this in Rosenberg’s novel. (However, I see that Rosenberg is writing a sequel to this book, so maybe Molly Brown will get a mention there.)

I think what Rosenberg succeeded in doing most here was portraying the vast differences between the lives of those in poverty and those who are wealthy. Since Baby Doe experienced both of these, the contrasts were extremely stark. The way that Baby Doe moves from almost abject desperation to unbridled excess and back to near destitution again with such grace and inner strength, portrays her as a woman that both eschewed Colorado’s high society, even while she anguished at being shunned by them. It seems to me that Rosenberg believed in Baby Doe’s deep inner goodness, and that her famous beauty was both her greatest asset, as well as the bane of her existence. I’m also sure that Rosenberg wanted us to understand Baby Doe in this way – as a woman who could have used her looks much more maliciously and profitably, but who actually preferred to get her hands dirty with real work that needed to be done – both literally and figuratively.

To tell the truth, while I didn’t totally fall in love with Baby Doe, by the time I finished reading this novel, I certainly respected her (which is more than I can say about the subject of Rosenberg’s previous novel, Mrs. London). In addition, I also felt sorry for her, even though some of her misfortunes were partially her own fault. The bigger question is, was Baby Doe really the “gold digger” that she was reputed to be? I have to admit that in some ways, yes, she was. Certainly, her first marriage to Harvey Doe was orchestrated to help her and her family financially. But I think that what Rosenberg was trying to say here is that this wasn’t really what Baby Doe was all about, and after that marriage breaks down, Rosenberg delves much more deeply into Baby Doe’s character, which made her a more sympathetic character. The thing is, I wonder if Rosenberg had been a bit less detailed about the lives of Baby Doe and Horace Tabor from before they came together, I might have liked both of them a little bit better. In fact, I didn’t care much for Horace at all, and that was a problem for me with this book.

Even so, there’s heaps of drama in Baby Doe’s story alone, and Rosenberg took full advantage of that, attempting to include as much of it as possible here. That Baby Doe eventually married Horace Tabor, a man whose life was no less dramatic, both before and after they met, made for tons of material for a work of biographical fiction. In fact, one could almost say that Rosenberg struck it rich when she decided to write this book. (Since there’s apparently a sequel, I think Rosenberg’s mine has yet to run dry.) For this, I think I can easily recommend this book with a solid four out of five stars.

Lion Heart Publishing released “Gold Digger: The Remarkable Baby Doe Tabor” by Rebecca Rosenberg on May 28, 2019. This book is available (via the following affiliate links) from Amazon, Barnes & Noble, Walmart (Kobo) US eBooks and audiobooks, Wordery, or The Book Depository (both with free worldwide delivery), new or used from Alibris, used from Better World Books (promoting libraries and world literary), as well as from an IndieBound store near you. I would like to thank the publishers for sending me an ARC of this novel via NetGalley.

2 thoughts on “Marriages of the Mines”