Book Review for “The Art of Regret” by Mary Fleming. 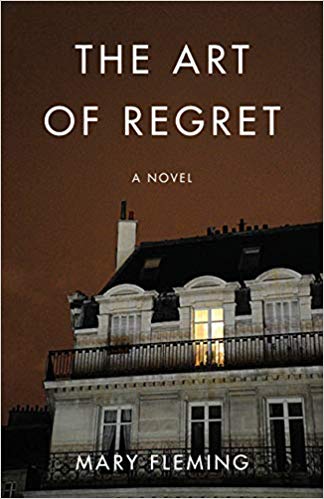 Trevor McFarquhar is an American in Paris. No this isn’t a re-imagining of the classic Gershwin musical; rather, it is a study in displacement on the backdrop of tragedy. You see, Trevor has been living in Paris since he was a boy, since not long after his father’s death which came only a year after his sister’s death. Those two accidents changed him, but not his younger brother Edward, who was too young to remember any of it. That’s why they’re so different, and why Trevor never let his step-father adopt him. With such memories haunting him, his falling into owning and running a bicycle shop have allowed Trevor to glide through his life. But then, as Goodreads says, “… two things happen. The 1995 transit strike forces Parisians through Trevor’s shop door to procure bicycles, and his once-sluggish business suddenly turns around. To his surprise, he is pleased. At the same time, Trevor enters into a relationship that threatens to destroy his relationship with his entire family.”

Once again, this is a book that is somewhat outside my comfort zone, being both contemporary and with a male main protagonist. However, the author is female, and this was published by the independent publisher She Writes Press, and you know I like to encourage indie publishers and find new female voices. Mind you, to be totally honest, I really disliked the cover art for this book, and if I had seen it in a shop, I probably wouldn’t have ever picked it up. That said, I’m very glad that I read this novel because it reminded me that authors who successfully write first person novels with protagonists that don’t match their own gender, must be admired. At least I think that Fleming did a good job here, since I don’t believe she fell into many clichéd traps (except for one) regarding the male psyche.

Of course, Trevor is a flawed character, which is why we both get annoyed with him, and yet he’s still very endearing. This is partially because he’s a bit of a curmudgeon, whose grumpiness often gets pushed aside despite himself. For example, there’s his relationship with a stray dog that “belonged” to a homeless man, which he ends up having to take care of, much like his inheriting the bicycle shop. By the way, this bit of the story seems to be something of a metaphor for Trevor in general, which was a very nice touch on Fleming’s part. Then there is Trevor’s hiring of the young Polish man who was desperate to not get deported. While this seems to be a hire of convenience, since he needed an extra pair of hands during the strike anyway, Trevor also comes to care for Piotr as much as he comes to love the dog, which he ends up naming Cassie.

In fact, there are a lot of these little parallels and metaphors going on in this novel, which means that this book has more than what meets the eye. The question then becomes, do they come together, and if so, was that Fleming’s aim? I’d say that I believe Fleming was hoping that the reader would catch all these bits and pieces, and for the most part, I think they came together quite well. However, there were a couple of things that seemed to dangle loosely with the ending of this book, that made me wonder if Fleming either decided to ignore them, or preferred to avoid wrapping them back into the story. Don’t get me wrong, I think my readers already know that I don’t believe that all novels need everything to be tied up in a pretty bow at the end, but sometimes too many things feel unattended; it would therefore be helpful if just a couple more of these bits got a touch more attention. That said, I did enjoy the ending to this novel, and I don’t think Fleming could have concluded it better.

I should also mention that I truly appreciated how Fleming made Paris into yet another character of this novel. While reading this book, it was totally obvious to me that Fleming knows Paris, and its surrounds, both in all their shame and their glory, right down to the bones. In fact, when Fleming described certain places in various types of weather, I felt like I could almost see and smell those spots. This was a true pleasure to read, and even when I felt like the story line was getting slightly muddled, Fleming was able to clear these bits up by waxing lyrical about this street or that park or those buildings, and how they differed from season to season, year to year. This was probably Flemings greatest accomplishment with this novel, and kudos for her evoking such strong emotions about this through her writing.

All told, this was a fascinating book, which I enjoyed very much. I think Fleming did a very good job in portraying Trevor in all his strengths and weaknesses, and bringing the story to a very satisfactory, coming-of-age ending. However, I’m not sure that Fleming pulled enough of the metaphors and parallels together with the plot, but she certainly afforded us an intimate look into turn-of-the century Paris through the eyes of a man in the midst of change. For this, I think I’ll give this novel a strong four out of five stars and warmly recommend it to my readers.

She Writes Press released “The Art of Regret” by Mary Fleming on October 22, 2019. This book is available from Amazon, iTunes (iBook or audiobook), Wordery and The Book Depository (both with free worldwide delivery), new or used from Alibris, used from Better World Books (promoting libraries and world literary), as well as from an IndieBound store near you. I would like to thank the publishers for sending me an ARC of this novel via NetGalley.

3 thoughts on “A Path to Changing Gears.”