Book Review for “The Beantown Girls” by Jane Healey. 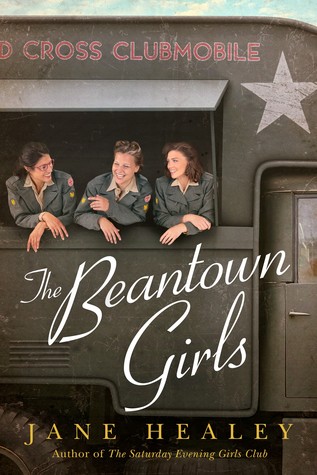 The year is 1944, and Fiona Denning’s fiancé Danny, has been reported missing in action in Germany. Instead of staying home and worrying, she recruits her two best friends from college to join up with the Red Cross to become “Clubmobile Girls,” handing out coffee and doughnuts to American soldiers fighting abroad. This is what takes Fiona, to England with the vibrant and artistic Viviana and the quiet music teacher Dottie. Fiona is only hoping that they’ll be transferred to the continent so she can try to find out what happened to the love of her life. What this adventure has in store for them might be more than they bargained for – both for the good and the bad.

Okay, so first off, yes, this story does have a whole lot of romance, but I refuse to call it a romance novel, because it really isn’t. Once again, I’m listing this book as a coming of age novel, because the way these three develop and grow is probably one of the most essential parts of this book. Here you have three young, educated women, who are just at the very beginning of the lives they’ve always planned to have and they upend the whole thing to volunteer for the Red Cross, doing something that sounds pretty mundane, which actually changes them for the rest of their lives. Of course, war will do that to anyone, but they stepped into it with their eyes (at least partially) open, unlike many of the soldiers they’re meeting. I have to admit that I didn’t know there was anything like this, and I’m thrilled that Healey has taught me something new about WWII. So already we’re on essentially the right footing here, but admittedly, I personally could have done without so much romance. There was enough of everything else to keep my interest.

I think what impressed me the most with Healey’s book was her character development skills. These three women are really the force behind the action, and I always appreciate a good character-driven novel. In fact, I grew so fond of these three that (despite some slightly annoying relationship snafus) when I’d finished reading this, I started thinking that Healey really should write a sequel, set… oh… say 20 years later, because I’d love to find out what happened to them after the war. (Plus, I looked it up and found out that there was a similar thing called the “The Donut Dollies” that went to the war in Vietnam!) It got me thinking that maybe Fiona’s own daughter might be a character in a novel that describes their adventures in that war. That should be food for thought for Ms. Healey! After you’ve created three marvelous characters, please don’t make them into ghosts. This, of course, is high praise indeed. Especially since I’ve been known to abandon books when the authors couldn’t get me to care enough about the characters.

Of course, this wouldn’t be a story about war if Healey hadn’t included some hair-raising action along the way. Without giving away any spoilers, I’ll tell you that this wasn’t confined to exploding doughnut machines or burns from scalding coffee. Now, I’m not one for adventure novels, but there were some scenes here where I was on the edge of my seat, and not one of them had to do with lipstick or nail polish, either (mind you, there were a couple of more humorous bits about the latter)! In fact, there were some scenes where these girls come so close to the fighting that it seemed almost unbelievable. However, you’ll find out in the afterward that those particular events described in this book were well documented as having happened in real life, only one of which does Healey insert these girls when in fact, they weren’t there.

So, what have we got here? I’ll tell you what… we have one compelling story (yes, I know I use this word too much) about women during WWII, who were part of the war efforts about which we probably knew nothing about before now. Yes, there’s some romance along the way (some of which I could have done without), but the characters are so carefully drawn, and so empathetic, and they come through their adverse situations as even better than they were to being with, so that you hate to get to the last page and say goodbye to them. For this, I think I can warmly recommend this novel with a very healthy four and a half (nearly 4.75) out of five stars! (So… Jane… about that sequel…)

Lake Union Publishing released “The Beantown Girls” by Jane Healey on February 5, 2019. This book is available (via the following affiliate links) from Amazon, iTunes (audiobook), Wordery or The Book Depository (both with free worldwide delivery), new or used from Alibris, used from Better World Books (promoting libraries and world literary), as well as from an IndieBound store near you.

14 thoughts on “War with Doughnuts and Coffee.”