Book Review for “The Secret Life of Mrs. London” by Rebecca Rosenberg.

Charmian London was the second wife of the highly prolific author, poet, playwright, screenwriter, journalist, and political essayist Jack “Wolf” London. Although only married for 10 years, their relationship was highly publicized and public. But who was this woman behind the great man who hobnobbed with some of the era’s greatest artists (including Houdini), and traveled the world and was able to verbalize it all with such passion and poetry? This is the question that Rosenberg’s novel attempts to answer.

Confession time… unlike Rosenberg, I’ve never read anything by Jack London. Seriously, this is the truth. Oh, I’ve heard of him, of course. How could you not? They’re still making movies and TV series based on his writings. As of this writing, IMDb shows three in post-production, another one filming and yet another listed as pre-production! That’s pretty amazing seeing as the first film based on his writing was released in 1907 – over 110 years ago! But he isn’t at the center of this book… or rather, he isn’t supposed to be its focus; that is reserved for Charmian, at least in theory.

You can already tell that I have my reservations about this book, can’t you? Well, let me first say that Rosenberg has a really enchanting writing style, one that floats between being lyrical and being guileless, which I found most attractive. I also very much enjoyed the evocative quotes from London’s works, that Rosenberg peppers throughout the narrative along with the snippets of his poetry that introduce each chapter. Obviously, there’s a hole in my literary education here that I should probably rectify, and if any book would entice me to do that, it is certainly this one. Mind you, I’m a bit more intrigued to delve into Charmian’s writings, since I’m wondering if her talent wasn’t ignored because of who she was, or more correctly, because her husband was so much more popular and prolific (and overpowering in his personality).

Something that might give pause is that the timeline of this book is actually quite limited. Rosenberg starts out this story in 1912, and carries us through 1917, which is just about only a year after Jack’s death. This means that a good three quarters of this novel focus on the last years of Jack’s life, and Charmian’s relationship with a man who drinks and smokes way too much, but whom she loves so deeply, she forgives him everything, even his dalliances with other women. I think it must have been impossible to fully extricate Charmain from Jack, especially considering the years this book focuses upon. The thing is, I was kind of hoping that she’d succeed in showing us more of the woman herself, and less of the person behind the man. This also made me a bit annoyed with Charmian, since I wonder if she was really so terribly wrapped up in Jack that she actually allowed herself to be so fully engulfed by his larger than life personality.

This isn’t to say that we don’t see the forest for the trees, since Rosenberg does attempt to give us as much of Charmian as she can. However, the way that Rosenberg connects Charmian’s anxiety and angst to Jack’s well-being and career feels overpowering at times, and because of this, the middle of this book feels sluggish in places. Thankfully, this picks up somewhat after Jack dies, but then we still seem to get an almost parallel scenario with Charmian’s relationship with Houdini. It just made me feel like what Rosenberg portrayed here, despite what was probably her intention, was a woman with such low self-esteem that she felt that only someone else – a man – could validate her existence. I’m not totally sure that this is what Rosenberg wanted us to conclude. In fact, I think Rosenberg wanted us to see a strong woman who fought these chains and somehow was able to find independence and her own place in this world – even if it never got to the level of fame that her husband achieved. Unfortunately, that wasn’t my takeaway from this book, although many people may not see it this way.

I would like to conclude here by pointing out how much I appreciated and enjoyed Rosenberg’s writing style, unique voice and storytelling ability, as well as the way that she perfectly ended the novel so succinctly and on such a hopeful note. I think that my biggest problem with this book is that I really wished it had begun where it actually ended. That said, Rosenberg certainly has the potential to become an amazing historical fiction writer, and who knows, she might write a sequel to this story. (I can promise you that I would want to read that book, and I doubt anyone could do a better job.) Yes, I know, many readers will disagree with my assessment here; Rosenberg can’t give us what wasn’t there, but all things considered, (including the fact that this is a debut novel, and I cannot discount this as an excellent first effort) I can still recommend this book, but for me, I will give it a highly respectable three and a half stars out of five, and I look forward to her next novels.

Released January 30, 2018 by Lake Union Press, “The Secret Life of Mrs. London” by Rebecca Rosenberg is available from (affiliate links): Amazon, Walmart (Kobo) US eBooks and audiobooks, the website eBooks.com, iTunes (iBook or audiobook), Wordery or The Book Depository (both with free worldwide delivery), new or used from Alibris, used from Better World Books (promoting libraries and world literary), as well as from an IndieBound store near you. 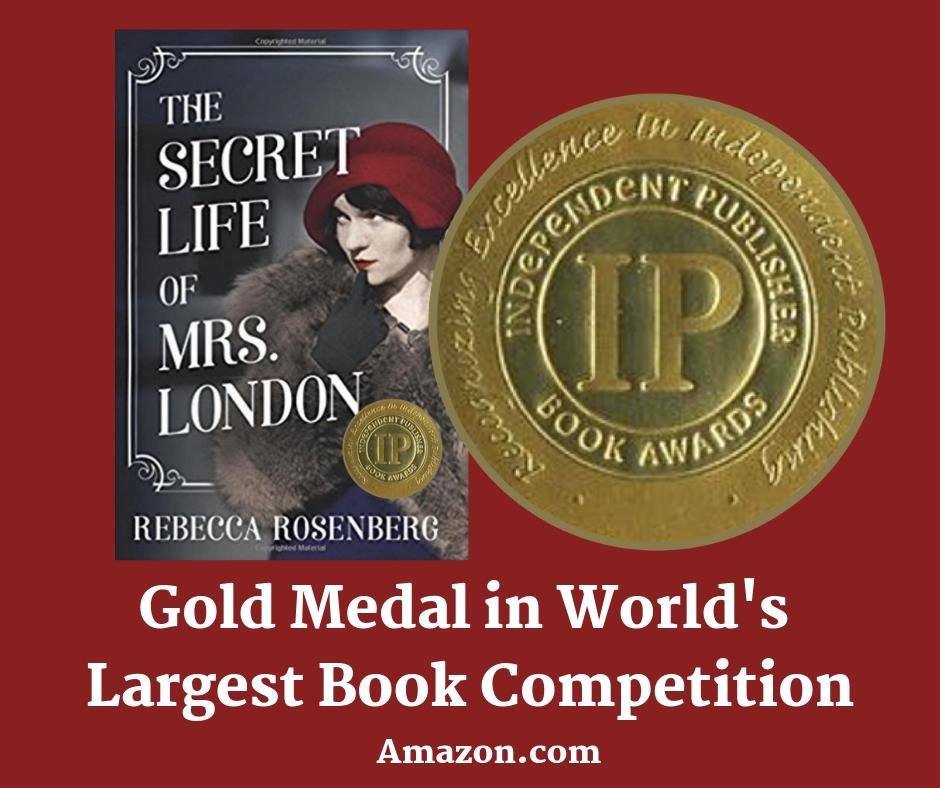 12 thoughts on “An Almost Famous Woman”