Book Review for “The Printed Letter Bookshop” by Katherine Reay. 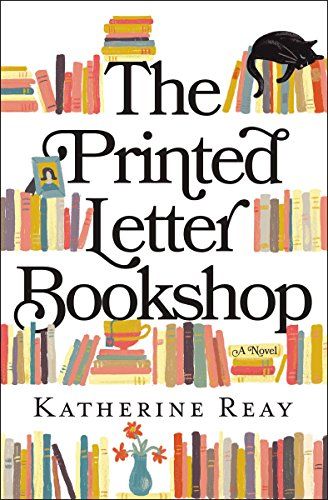 This is the story of three women and the memory of another. The memory is of Maddie Cullen, the owner of the Printed Letter Bookshop in the small town of Eagle Valley IL, not far from Chicago. Two of these three women work with Maddie – Janet and Claire. The other one is Maddie’s namesake and niece, Madeline Cullen. According to Goodreads: “One of Madeline Cullen’s happiest childhood memories is of working with her Aunt Maddie in the quaint and cozy Printed Letter Bookshop. But by the time Madeline inherits the shop nearly twenty years later, family troubles and her own bitter losses have hardened Madeline’s heart toward her once-treasured aunt—and the now struggling bookshop left in her care.”

Novels focusing around bookshops are very popular, and I believe they have been for quite some time. As an avid reader myself, and someone who (of course) loves to visit indie book stores, the main reason I asked for this book was its setting. I was therefore very pleased to find that Reay’s description of the shop itself was so charming, and so intimate, that it practically became another character in the book. It also helped that this imaginary town seems to be located not far from where I grew up (Evanston, IL), and that Reay mentions both my hometown and Chicago in this book, which always brings back fond memories of my youth. I was therefore surprised that I hadn’t read anything by Reay before. Then I realized that until this book came along, her novels wouldn’t have come across my radar since I believe they’re considered Christian Fiction, which is a genre I don’t generally read (not because I’m Jewish, but because I don’t care for any religious fiction). Thankfully, while there is some spirituality, prayer and God in this story, I didn’t feel these detracted from the story. It almost goes without saying if you dislike sex scenes in your books, be assured that none of the romantic relationships ever get beyond hand holding and some kissing.

What I liked the most about this book is that the plot here is really well imagined and devised. The idea here is that these three women end up thrown together in a difficult situation. Their only guidance they have is their own wits and the letters that Maddie left them before she died. Each letter has a personalized list of books to read, along with a bible verse about being a woman and motherhood (which makes it appropriate that this book was released so soon after Mother’s Day). The concept here of combining books with what we can take away from them as life lessons, is one very unique and special aspect of this novel, and Reay deserves kudos for this creative integration. This sets up this book to become a strong character driven novel, which is something I’ve always appreciated.

Of course, each of these women come with their own baggage. Regarding this, Goodreads adds, “Reeling from a recent divorce, Janet finds sanctuary within the books and within the decadent window displays she creates. Claire, though quieter than the acerbic Janet, feels equally drawn to the daily rhythms of the shop and its loyal clientele, finding a renewed purpose within its walls. When Madeline’s professional life takes an unexpected turn, and when a handsome gardener upends all her preconceived notions, she questions her plans and her heart.” I have to admit that I liked Madeline, and Claire was also mostly likable, but less than Madeline. Unfortunately, I never really warmed all that much to Janet; she started out as simply troubled, but then she became a bit annoying and started losing my sympathy. This only slightly improved when she overcomes a major obstacle in her life through her own persistence. As for the other characters, Reay places the men on the sidelines, bringing them forward only when they can further the story. As for Maddie, although her death and legacy are the great motivators in this book, we only get to witness her second-hand through other characters’ accounts, which I think was a bit of a shame, because I would have liked to have gotten to know her a bit better.

While all this sounds pretty good, I did have some niggles about this book which prevented me from giving this a higher rating, mostly in the mechanics and techniques used. For example, Reay tells this story through each of the three main characters, in chapters alternating chapters. Madeline’s and Janet’s stories are all told in first-person, but Claire’s story was (I believe, mostly) told in third-person. These POV changes confused me, and because each chapter was subsequent to the previous one (without overlap), I also felt like things were missing in the action. There were also some gaps in the timeline between chapters that sadly reinforced this feeling, even when a character described things that went on between the narratives. My thinking is that this might have been more cohesive and consistent if it had been told as one, continuous third-person narrative. There were also a few times that Reay mentioned or hinted at something that I hoped would pan out to lead to something that remedied the shop’s problems, but which were forgotten afterwards.

I wish that these things didn’t bother me as much as they did, because there is a whole lot to like about this book (including the very attractive cover artwork). In fact, I’m certain that other readers will be more than willing to overlook these drawbacks (and I’ve seen several five-star reviews of this book already). I can still recommend this to people who enjoy fiction that is very clean, has some light, religious undertones, and a nice variety of female characters, both weak and strong. For me, while it was very nice, it didn’t really wow me, so I have to give it a (better than average) rating of three out of five stars.

Thomas Nelson released “The Printed Letter Bookshop” by Katherine Reay on May 14, 2019. This book is available (via the following affiliate links) from Amazon, Barnes & Noble, Walmart (Kobo) US eBooks and audiobooks, the website eBooks.com, iTunes (iBook or audiobook), Wordery or The Book Depository (both with free worldwide delivery), new or used from Alibris, used from Better World Books (promoting libraries and world literary), as well as from an IndieBound store near you. I would like to thank the publishers for sending me an ARC of this novel via NetGalley.