It is 1928, and Matilda (aka Mattie) Simpkin is living with her old friend from her Women’s Suffrage Campaign days, Florrie Lee (lovingly known as “The Flea”), and still giving lectures on the suffragette movement, and why it is still important. Yes, it has been 10 years since some women were given the vote, and soon all women will receive this right; but it still feels like their work with the Women’s Social and Political Union (WSPU) is not yet done. When an old friend shows up after a long stay in Australia, spouting that the WSPU is dead, and the real future belongs to – believe it or not – fascism, Mattie realizes that the only way to keep up what she started back before the Great War, is to get them while they’re young, and of course, to start with girls!

It isn’t often that you get an historical fiction book that is labeled as being humorous. In fact, most historical fiction novels can be pretty dramatic (although the bad ones can be so dramatic that they’re unintentionally funny). So, when I saw that this book was being called “funny” I knew I needed to read it, mostly because I’m hoping that my own “work in progress” ends up with a lighter tone to it than most. Technically, to call this a comedy would be the proper term; as we all know the classical definitions of comedy and tragedy are where the former has a happy ending and the latter essentially ends up with everyone either miserable, or dead, or both. However, in today’s more modern sense, I wouldn’t go so far as to call this book that, despite how often I giggled and/or found myself smiling while reading.

Instead, I’d call this novel a fun read. What makes it that is how Evans develops her main protagonist Mattie. Here’s the type of curmudgeon of a woman in her 50s, determined, self-centered, and quite a bit full of herself, almost to distraction. She does things that promote her ideals and her values, with a belief in what see sees as right, that is nearly ferocious. Of course, when someone is that passionate, they sometimes can be absentminded about other things, and that’s how Evans portrays Mattie. I imagined that Mattie was probably a touch overweight (from eating the wrong things, and not from enjoying large meals), and on the disheveled side in her personal habits. She’s also the type of character you’d love to visit with, sit down with and chat for hours on end, even though it is totally possible that she’ll stand up and walk away in the middle of a sentence, out of distraction, and not meaning to be rude. So, the most comical things in this book are squarely placed in the character of Mattie, and nothing that Evans has her say could ever be considered predictable.

Mattie is therefore the perfect foil for “The Flea” who is reserved, exacting, and ultimately loyal. Because of their being such opposites, one might think that their relationship was one of more economical convenience than companionship, and for “The Flea” it does appear that this is particularly true. Because Mattie owned property, she was able to vote since 1918, but “The Flea,” who has no inherited income and has to work for a living, was excluded from this right for another 10 years. I found that some of the interactions between these two women were particularly fascinating, and once again showed Evans’ comical intentions here, as well as a talent for character development. This isn’t to say I wouldn’t like to have a long chat with “The Flea” but I believe that her conversations would be more focused, and probably shortened by her need to get on to some kind of chore or task. She’s probably much more fastidious in her dress, but not at all fussy; she’s practical in all that she does. That doesn’t make her less likeable, but it does mean that she’s harder to get to know than Mattie; she doesn’t wear her heart on her sleeve, even when you wish she would.

From what I’ve said so far, I think you can see that this novel is strongly character driven, and that is always a very good thing. That doesn’t mean that there is no plot here, because what Evans has done is build a story around these two women. The essence of this plot is around Mattie’s desire to start a type of girls’ club, that would encourage the younger generation to learn how to think for themselves, but more importantly, to develop the self-confidence to dream of a future for themselves that is beyond their “station” as society back then would have dictated. This idea that women could aspire to be whatever she sets her mind to, was totally radical during this era. Of course, that there’s still misogyny and gender discrimination today is proof that Mattie’s belief that her work wasn’t done just because women could vote, continues to this day.

All this praise doesn’t mean that I thought this book was perfect. There was one thing that bothered me with this novel, and that was the ending. Without giving away any spoilers, I’m was unsure about the last couple chapters, although I do understand what Evans was trying to achieve here. Although what happens wasn’t uncharacteristic, this conclusion to the story didn’t fit that well, and felt much like an afterthought. Thankfully, it didn’t detract all that much either (and I’m wondering if Evans put these bits in so she can write a sequel to this novel). All told, I think that this was a truly lovely novel with lovable characters and a simple plot that historical fiction lovers who enjoy reading about England’s suffragette movement and its aftermath will thoroughly enjoy. For this, I’m warmly recommending this book with a healthy four and a half stars out of five.

Harper Perennial – Harper Collins will release “Old Baggage” by Lissa Evans on April 16, 2019. This book is (or will be) available from Amazon, Walmart (Kobo) US, for both eBooks and audiobooks, the website eBooks.com, iTunes (iBook (US), iBook (UK), or audiobook), Wordery or The Book Depository (both with free worldwide delivery), new or used from Alibris, used

from Better World Books (promoting libraries and world literary), as well as from an IndieBound store near you. I would like to thank the publishers for sending me an ARC of this novel via Edelweiss. 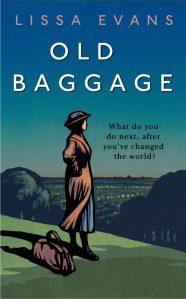 4 thoughts on “Going for the Second Chances.”