Book Review of “The Beautiful Strangers” by Camille Di Maio. 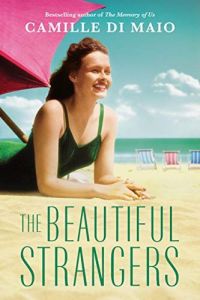 There are actually two women named Kate Morgan. One of them is a ghost haunting at the famous Hotel Del Coronado in San Diego, since her death in 1892. The other one is a young girl who is stuck working in her family’s fish and chip shop in San Francisco in 1958. But when the young Kate is urged by her grandfather to take a job on a movie set located at that hotel so she can chase her dreams as well as find his illusive “beautiful stranger” she jumps at the chance, even though she knows her grandfather is suffering from dementia.

Interestingly enough, until I read the author’s notes, I didn’t know that there really was a woman called Kate Morgan who died (under mysterious circumstances) in 1892 at this hotel. Apparently, many people believe that her ghost roams the halls of this hotel to this very day. The hotel is also known for being the location used for the movie “Some Like it Hot” (one of my all-time favorites, by the way) which starred Marilyn Monroe, Jack Lemmon and Tony Curtis (among others). It is these two pieces of real history, that become the backdrop for Di Maio’s novel, which is precisely the type of fodder that is truly inspirational for inventing an absorbing biographical, historical fiction novel.

Where Di Maio excels here is in building an intriguing plot that brings these two totally unrelated events together. Well, not actually together, but rather inventing a string of dots that connects between them. It was fascinating reading how Di Maio did this, and she employed practically every trick in the book. There’s some amateur detective work on the skimpy clues, combined with both chance encounters and quite a bit of serendipity. Although these things can feel overly convenient, the fact that it didn’t bother me and neither did the additional little love interest for young Kate, means that Di Maio easily achieved one of the most important things in writing fiction, that being keeping the reader’s interest. I also appreciated Di Maio’s writing style, which was just lyrical enough in the descriptions, and just straightforward enough in the dialogues that it flowed nicely, and the characters were all very likeable, especially our rebellious, almost ahead of her time feminist young Kate.

Mind you, this doesn’t mean that this was a perfect novel. In fact, I had several niggles with this book. For example, there were some places where I think young Kate’s inner thoughts were slightly repetitive. Very early on in the book, we come to understand that Kate’s life is not going as planned, and that she’s unsure of how to solve her grandfather’s mystery, if she’s going about it in the most effective way, or even if she should bother trying. These recurring inner doubts, along with her speculations regarding her feeling towards the man she obviously fancies, end up getting voiced so frequently, that I’m afraid they began feeling tedious, and I admit I started skimming over them at one point, since I was anxious to see what would happen next. Furthermore, I was a bit disappointed with the ending here, where young Kate seems to act somewhat out of character and becomes suddenly conventional, when she’d been such a maverick throughout the novel.

I also had a problem with the ghost. Yes, this could very well be my own preferences, since my regular readers already know that I’ve never been a fan of paranormal novels, even though I can take (and sometimes even enjoy) a bit of magical reality from time to time. For example, I wasn’t thrilled with the ghost in Kate Morton’s “The Clockmaker’s Daughter” but I very much enjoyed the ghost in “Her Fearful Symmetry” by Audrey Niffenegger. Mind you, the ghosts in both those stories weren’t the main reasons why neither of them got a full five stars from me. However, with this book, I’m feeling like the ghost is a much bigger problem here than it was with these other two examples.

On the one hand, I understand why Di Maio included this narrative from the ghost Kate’s perspective, because she gives us insights into the story that the young Kate isn’t party to, and could never know much, if anything about. In fact, there are many vital pieces of information that ghost Kate gives us that add to the story very nicely. On the other hand, there were also pieces of information in these passages that seemed somewhat superfluous to me, since I found several of the things ghost Kate talked about were revealed through human means later on in the book. In addition, I was also a bit confused when the ghost broke the fourth wall and seemed to address the reader directly at one point. That disturbed me because my immediate thought was, who was she talking to, and why? I seriously believe that these were overdone, and I would have confined these passages to only the things that only the ghost Kate knew and/or felt, both before and after her death. That way, several of the answers to young Kate questions aren’t already partially known by the readers, and that might have further increased the suspense in this story.

This also means that the above noted problem I had with young Kate’s harping on her insecurities was intensified when I read things recounted by ghost Kate were then discovered by young Kate. It just made me feel like I was, for some parts, being told the same story twice, and since one telling was from a ghost, well… sorry, but that’s just not for me (even though I did appreciate the very end of the last of ghost Kate’s entries here – which I can’t say more about). Still, I am certain that my problems with this book are precisely the reason why many people will adore it completely. So, I can still recommend it to those who like a bit of paranormal activity in their historical fiction, but sadly, I’m not one of them. That’s why I’ll give it three and a half stars, because of the very creative plot, the lovely writing and the enjoyable characters.

Lake Union Publishing released “The Beautiful Strangers” by Camille Di Maio on March 5, 2019. This book is available (via these affiliate links) from Amazon, Walmart (Kobo) US eBooks and audiobooks, the website eBooks.com, iTunes (iBook or audiobook), Wordery or The Book Depository (both with free worldwide delivery), new or used from Alibris, used from Better World Books (promoting libraries and world literary), or from an IndieBound store near you. I would like to thank the publishers for sending me an ARC of this novel via NetGalley.