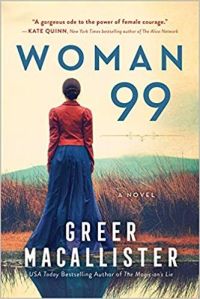 How far would you go to save your sister? What if she’s the one who saved your life many times throughout your childhood? Would you risk everything, possibly even your own sanity? This is the dilemma that Charlotte Smith faces when her sister Phoebe is put into an insane asylum, and it is also the basis for Greer Macallister’s third historical fiction novel. If this was a contemporary fiction novel, it might not be so compelling. But this becomes a harrowing tale because the action takes place in the late 19th century, not long after the journalist known as Nellie Bly revealed the horrors of those institutions.

As you can see, I’ve entitled this review “pulling a ‘Nellie Bly’” because that’s essentially what Charlotte does here – she purposely gets herself admitted to the same asylum to which she knows her sister has been committed. Of course, Charlotte isn’t crazy, she just wants to get her sister back at home, even though she knows that Phoebe isn’t mentally stable. But that doesn’t matter to Charlotte. I’d write more about the story, but I’m afraid that this would end up with spoilers, and my readers know how much I hate that.

Instead, I will discuss why I think this book is so powerful, even though it sounds like the answer is obvious. Indeed, it very much is so, but I also should note that there was one thing that didn’t sit completely right with me. This was the ending; now without going into details, I have to say that after the climax (or rather, after one major and one minor climax) I twice when I reached the end of the chapters, I immediately felt that these would have been very good conclusions to the book. In fact, I was so sure of this that I wasn’t expecting to see an additional chapter after either of them. This isn’t to say that what followed detracted from the story; I’m only saying that I felt some parts at the end were a bit unnecessary, and slightly overly tidy for my taste. Also, during the conclusion of the story, I felt that Macallister tried a too hard to keep certain pieces of information out of the narrative. This is difficult to explain without giving too much away, but leave it to suffice that this felt a little forced, and that made the ending somewhat less flowing than it could have done.

That said, these were the only drawbacks of this book, and things I enjoyed in her first two novels, were right here for me to enjoy once again. To be specific, her first novel “The Magician’s Lie” was a type of psychological thriller, which we get shades of here as well. Her second novel, “Girl in Disguise” included quite a few elements to adventure, and we get this here too. In fact, I’d say that this novel is almost a hybrid of the first two – where one could say that we get an adventure story that feels like a psychological thriller. Mind you, the psychological parts here are more clinical than in her first novel, which seems obvious, considering the setting.

In both her two first novels, Macallister proved that she could not only build a twisting story that keeps us guessing, but that she could also create characters that intrigue us, even if some of them are less than savory characters. Of course, Charlotte is the star here, and Macallister chose to tell her story in first person, and rightly so in my opinion. Had this been told in third person, we would never have felt the intimacy that Macallister achieved here, which was essential to this story. Furthermore, because we can follow Charlotte’s travails in the asylum through her thoughts, this also ends up being a type of coming-of-age story. By that I mean that Macallister constructs Charlotte so that we witness how she slowly discovers things about herself she never knew, as well as the world around her, including the unusual setting she’s put herself into. This loss of innocence, while still retaining some elements of naivete was beautifully balanced here, and very credibly constructed. Charlotte is truly a realistic, and carefully flawed character that we can sympathize with, even if we’ve never had any similar experiences. Add to this how clearly Macallister also draws all the rest of the varying other characters, and you’ve got a cast of women that would have dozens of Hollywood actress clamoring to play each of them!

As already mentioned, the action in Macallister’s novel is nearly thriller level, and the amount of twists included, presented as obstacles that Charlotte faces and has to figure out how to overcome, made this all the more absorbing. While I already knew that Macallister enjoys throwing in the unexpected to keep her readers on their toes, I believe she surpassed herself with this one, and a few of these had me swearing under my breath (in surprise, not in anger, I assure you!). I’m sure all this will make it a fast read for many, since it does give this novel that “unputdownable” quality.

All told, Macallister really gave us a truly exciting novel here, with a powerful story and exceptional characters. Yes, I did have a couple niggles about it, and if I’m totally honest, I’d say that I think I liked her second novel a tiny bit better than this one, but that could be because that had the biographical element that I adore so much, and this was purely fiction. Still, this is undeniably a marvelous read, and I’m warmly recommending it with four and a half (well, almost 4.75) stars out of five.

Sourcebooks Landmark released “Woman 99” by Greer Macallister on March 5, 2019. This book is available (via these affiliate links) from Amazon, Walmart (Kobo) US eBooks and audiobooks, the website eBooks.com, iTunes (iBook or audiobook), Wordery or The Book Depository (both with free worldwide delivery), new or used from Alibris, used Better World Books (promoting libraries and world literary), as well as from an IndieBound store near you. I would like to thank the publishers for sending me an ARC of this novel via NetGalley.