Book Review of “The Blue” by Nancy Bilyeau. 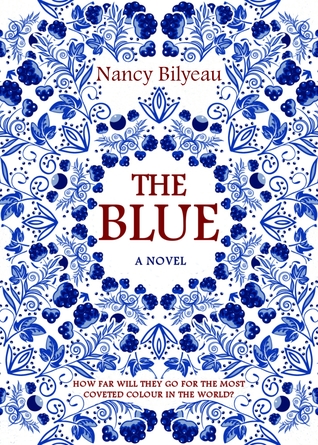 In the author’s notes of this book, Bilyeau calls this “a spy story set amid the rivalry of eighteenth-century porcelain factories,” in which the author tells the story of Geneviève Planché, who becomes entangled in the intrigue behind discovering a new shade of blue that is also wrapped up in the Seven Year war between France and England during the reigns of Louis XV of France and George II of Britain. Heightening this tension is also the fact that Geneviève, is a Huguenot and therefore an enemy of the country of her own heritage, which forced her family to flee to England before she was born. Finally, there is Geneviève’s desire to become a real artist – a profession barred to women in both France and England. So, when Geneviève receives an offer that would eventually help her achieve her dream, she reluctantly accepts, because that it means she’ll still be relegated to decorating porcelain in Derby. Taking up that position, while spying on the manufactory to steal the color’s formula, is where the intrigue begins, and her discovering the chemist working on that formula, Thomas Sturbridge, also brings a romantic aspect to the whole tale.

I have to say that Bilyeau really packs a punch with this novel, with everything she’s put into this. Aside from the industrial spying and Geneviève’s ambitions, Bilyeau also has the whole wartime France vs England aspect, which also plays a part in the espionage elements. Furthermore, Bilyeau also touches on the issues of religious freedom (or lack thereof), gender inequality, prejudice (in the form of class discrimination), and even income disparity – issues which we still face, in varying degrees, even to this day. There’s also the question of what is the true essence of loyalty, and how do we deal with situations that make us question our allegiances, what can make us betray those attachments, and what are the red lines we dare never cross, even if it means that constancy may mean our own destruction or downfall.

With all of this going on, and despite the over 400 pages to this book, one might wonder if this might make for a somewhat shallow book, where details seem left out of the story. However, that was not the case at all, and in fact, my biggest problem with this novel was that there were times where this story dragged slightly with too much detail. This made me a bit impatient at times, because I wanted to find out what would happen next. This isn’t to say that the book is slow, because it really isn’t. In fact, it is truly a fast-paced story, as contradictory as that may seem, since there are twists and turns in practically every chapter. Furthermore, the resolution to all of the conflicts comes only in the last pages of the novel. As satisfactory as that type of ending usually is, I did find it to be a touch abrupt, since it also felt like the answer was the slightest bit too convenient.

Again, don’t get me wrong, there was nothing implausible about how this book ended, since I could easily believe the clever way that Geneviève was able to escape her predicament, together with her being reunited with Thomas. This brings me to what bothered me the most about this novel. That was that because Bilyeau told this story using Geneviève’s first-person voice, we didn’t get to understand or know Thomas all that well, and as much as I liked him as a character, I felt he was relegated a bit too much to the sidelines. At the same time, his actions were paramount to the mystery here, but we hardly saw his own inner struggles with these problems. This also left Geneviève as being more of a pawn in her own liberation than her personality would suggest she could have been. My thought is that had Bilyeau written this in third person, we might have gotten a fuller picture of these two, and their relationship.

Despite these niggles, I appreciated all of the research that must have gone into writing this novel, but more importantly, I loved Geneviève deeply, despite her flaws, and Bilyeau drew her with such ease, that we might think she was a real person. Of course, she didn’t really exist, but apparently, she was a conglomerate of other, well-known women of the time. To make her so alive is certainly proof of Bliyeau’s talent. Geneviève was also the type of person that was ahead of her time, although not as much as a woman living during that era might have thought. Of course, at the time, there were countries outside England and France that were less averse to women entering the profession of artists and artisans, which Bilyeau points out. This fact lends credence to Geneviève’s desire to leave for other shores, particularly those that were more tolerant of non-Catholics.

Which brings me to my final dilemma, which is what rating to give this book. I can honestly say that I truly enjoyed reading this novel, and that the positives far outweigh those things I viewed as drawbacks (and I do NOT regret buying this book). Certainly, there will be many who will easily ignore all my small objections. So, if I’m to be totally honest, I haven’t even a single qualm in recommending this book warmly, but I can’t give it full marks, and I think it deserves a very solid four out of five stars.

Endeavour Quill released “The Blue” by Nancy Bilyeau on December 3, 2018. This book and other books by this writer are available (via these affiliate links) from Amazon, Walmart (Kobo) US eBooks and audiobooks, the website eBooks.com, iTunes (iBook or audiobook), The Book Depository (free worldwide delivery), new or used from Better World Books (promoting libraries and world literary) and Alibris, as well as from an IndieBound store near you.

9 thoughts on “The Tint and the Taint”