Book Review of “Paris: The Epic Novel of the City of Lights” by Edward Rutherfurd. 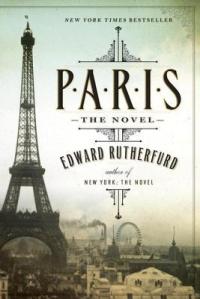 Epic is a word that has been bandied about far too often, and putting it into the subtitle of this novel might seem a bit pretentious. However, it is precisely the word that use be used about this book, seeing as it is not only long (my copy had 832 pages), but it also covers several centuries of the history of this amazing city. With this, Edward Rutherfurd has gathered together a small group of families, which he has placed within this backdrop, at various stages ranging from the 1261 all the way through to 1968!

Ambitious is yet another adjective that is appropriate to use for this book. If you turn to the page just after the index, you’ll find the timelines for the six fictional families that Rutherfurd follows in this novel over seven centuries. They are Le Sourd, de Cygne, Renard, Blanchard, Gascon, and Jacob. Throughout this book, these six families come into various levels of contact with each other, sometimes only in passing, but in other instances the connections become permanent ones – such as through marriage – with just about every other type of connection or contact in between. How Rutherfurd kept all of these figures straight in writing about them must have been a challenge, but somehow, he was able to make it all feel very easy and coincidental through his story telling, which is quite an accomplishment, in and of itself. That’s quite a high compliment from me, the mildly dyslexic reader who often has a hard time keeping large casts of characters straight.

The fact that this was sustainable for me, with such an enormous group of characters, was one of the major reasons I enjoyed reading this novel, and couldn’t stop. However, the main reason I can’t give this book a full five stars is because I did get confused several times while reading this. The problem for me was that for the most part, Rutherfurd did this in a non-chronological manner, and several times I found myself forgetting who was doing what and why. Now, I realize that there were some very good reasons for his doing this, mostly to highlight historical vs. the relatively contemporary connections between various character, but I found this method to be a touch confusing. Admittedly, it was a good thing that I had this book in print version, so that I could refer back to that above-mentioned chart; had I read this on my Kindle, I might have been completely lost when Rutherfurd jumped a couple hundred years and back again.

That said, the overall writing here was very fluid and enticing, which varied just enough from era to era, making each century feel just a touch different. This certainly couldn’t have been easy to achieve, and could feasibly be considered as near a stroke of genius as possible. For this alone, I cannot fault Rutherfurd. Add to this the fact that prose was deceptively simple, with very little poetic turns, means this novel could appeal to a very wide audience. That doesn’t mean that there aren’t some beautiful passages, because certainly there are, especially where Rutherfurd describes some of the many wonderful familiar and less known sites. I will admit that he made me want to visit Paris again, and try to see some of the places I’ve never seen there.

As I already noted, Rutherfurd weaves all this history and location into a plethora story lines, which made me think of something. Many years ago, there was a TV soap-opera called “Dark Shadows” (and yes, this was a television series long before Johnny Depp made a farcical film out of it, which was insulting to older fans of the show, to say the least).  I couldn’t help thinking about how that show would jump generations all the time, but the different actors would portray different characters where sometimes they might be the good guys in one era, but turn up as the bad guys in another. The one constant was the character of Barnabas Collins who, being a vampire, was always the same age and essence across the generations, although he might be more or less sympathetic, depending on those around him. What I’m trying to say here is that it occurred to me that Rutherfurd did something similar here, but instead of a vampire being the constant, the city of Paris itself, despite how it changed over the generations, was still the thread that held all these stories together.

In conclusion, if you’re not afraid of digging into a hefty tome, which is surprisingly fascinating about one of the most popular cities in the world, then this is just the book for you. Mind you, I found it difficult to keep some of these families and their relationships straight, but I couldn’t stop reading it, despite this drawback. That’s why I can still warmly recommend this novel and I’m giving it a healthy four out of five stars.

“Paris: The Epic Novel of the City of Lights” by Edward Rutherfurt was first published in 2013. This book is available (via these affiliate links) from Amazon, Barnes & Noble, Kobo (Walmart) eBooks and audiobooks, the website eBooks.com, iTunes (iBook or audiobook), The Book Depository (free worldwide delivery), new or used from Better World Books (to promote libraries and world literary) and Alibris, as well as from an IndieBound store near you.

9 thoughts on “7 Centuries and 6 Families of Paris”

A resource for readers and writers