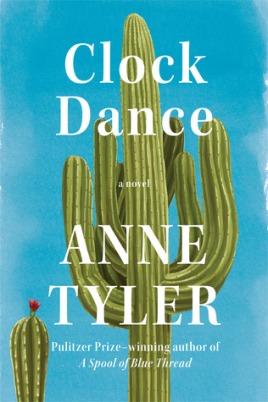 Willa’s life hasn’t been extraordinary, but it also hasn’t been uneventful either. When she was 11, her mother’s sudden, but thankfully temporary disappearance, was an experience marked Willa’s young life. When she was in college, she married her sweetheart and abandoned her education to raise a family. When she was only 41, her husband died in a tragic car accident. Now, 20 years later, one phone call from a total stranger is about to change Willa’s life once again. (Thanks for the free book, @PRHGlobal/@prhinternational)

Once again, Anne Tyler brings us a late-stage, coming-of-age story of a woman who you might have seen dozens of time on the street, but who you might never strike up a conversation with, and more the pity. Because if you did get to know her, maybe she might be very different than you might have thought. What Tyler likes to do in her novels is draw people who surprise us, and sometimes themselves along the way. In fact, although Willa is the center of attention here, almost all of Tyler’s characters in this novel start out to be seemingly one thing and then, turn towards being something else. Yes, there are some more predictable characters here, such as Willa’s second husband, who never seems to stray from being self-centered; but in general, most of Tyler’s characters have a tendency to do unlikely things, and at the most unexpected times.

This is one of the attractions of Tyler’s books, and while we’ve come to expect this from these novels, Tyler succeeds in keeping from falling into any type of formula in her books. This is a good thing, because formulaic novels can be boring. Yes, they say that there are only a couple handfuls of essential plots in the world, but if an author can find a way to frame their stories to include some type of twist, they will continue to entice readers to grab their next work. For example, in Tyler’s 2015 novel “A Spool of Blue Thread,” she tells the story backwards, starting from the most contemporary part, and then moving backwards in time (until Tyler decided she’d gone far enough). Here, the three short pieces of Willa’s earlier life – at age 11, at age 21 and once again at age 41 – leave many gaps in her narrative when the story jumps to Willa aged 61. This, of course, was one of the major points of this novel. That being, that you never know which of the things you experience during your younger days will be the ones that end up shaping your later life. The other major point of this novel is that you may have taken the wrong thing away from any or all those formative experiences, but it’s never too late to realize the lessons you learned back then, might have been the wrong one.

Another thing that I always enjoy in Tyler’s novels is her very open and straight-forward prose style. It always feels like I’m listening to a friend tell me a story, it feels that welcoming and honest. While Tyler’s prose may feel simple on the surface, that friendly feeling is also underlain with just enough of a poetic touch to make things feel alive and colorful. Add to this the way Tyler uses her language to set the atmosphere in her novels, and you have a winning combination. Mind you, Tyler’s stories aren’t always up-beat and this one has a somewhat gray tone to it that seems to prevail. It is almost like Willa is living in a type of fog, but as the story progresses, that fog starts to clear, leading up to a very concise ending that allows the reader to imagine what will happen to Willa and the other characters after the last page, which is exactly the way I like novels to end.

I should add here that even with all this praise, I didn’t find this novel to be as rich as her last one, “A Spool of Blue Thread.” As mentioned above, before we get to the main story of Willa at age 61, there are the three snippets from her past. These were wonderful but, I think she should have given us a little bit more of that, maybe even just one more to introduce us to her second husband, so we could understand better her later relationship with her sons. Also, perhaps in lieu of another snippet (or in addition to one), she could have done a bit more to developed the metaphor of the Saguaro cactus that appears on some of the covers. That said, who can resist sitting down with an old friend and hearing a captivating story that’s both delightfully told and heartwarming? That’s why I still can very warmly recommend this novel and give it four and a half stars out of five.

Penguin Random House (Knopf Doubleday Publishing Group) released “Clock Dance” by Anne Tyler on July 10, 2018. This book is available (via these affiliate links) from Amazon, Kobo Books, Kobo audio books, eBooks.com, iTunes (iBook or audiobook), The Book Depository (free worldwide delivery), new or used from Alibris or Better World Books as well as from an IndieBound store near you. I would like to thank the publishers for inviting me to read an ARC of this novel via NetGalley in exchange for a fair review.

4 thoughts on “Finding her Time”