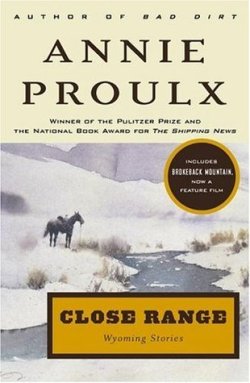 In this collection of 11 stories, including “Brokeback Mountain,” Proulx looks at the many sides of the people and vistas of Wyoming, a state that according to most sources is the 10th biggest in land size, and the second least densely inhabited (behind Alaska). Landlocked by Montana, South Dakota, Nebraska, Colorado, Utah and Idaho, Wyoming has 2/3 of its western part covered by the Rocky Mountains and is home to both the Yellowstone National Park and the Grand Tetons National Park. With these stories, Proulx attempts to create the types of unique characters who would choose to make their lives within this vast natural beauty.

Often when a truly powerful film comes from a work of fiction, I feel the urge to read the original, but don’t always act on this impulse. In this case, although my intentions were very good, my procrastination was even better. This was probably because I’ve never been into the genre of Westerns. This push-and-pull went on for quite some time, and in fact, it went on so long that when I saw a copy at a very cheap price not long ago, I bought it right away. Silly me, I already had a different edition languishing on my shelves for maybe as many as five years. What made me finally take this book up was the desire to read some short stories. This sometimes happens after I’ve read a particularly long, or complex, or engrossing novel. That brings me to this, the review of this collection of short stories.

I have to say that it was clever of the publishers of the edition I read to put the “famous” story – “Brokeback Mountain” – as the last one in the collection. Of course, there’s nothing to stop people from reading that one first, but the psychology of saving the ‘best for last’ was obvious here. Admittedly, it is the best story here, mostly because it is the one that seems the most focused of the bunch, since most of the other stories seemed to wander away from the point at times. That isn’t to say that a bit of sub-plot isn’t a good thing, but in one or two of the longer stories I felt like the essence of the story was lost along the way. However, it is important to note that for the most part, these tales focus mainly on the heart of the people who live in this state, and the types of lives they live, and the juxtaposition of how harsh their lives are as compared to the beauty that surrounds them, and that comes through in everything Proulx gives us here. Despite the tough realities depicted here, once or twice Proulx was able to a smile to my face, but for the most part, these stories are actually very serious and dramatic.

Of course, those occasional additions of humor made reading such a collection of intense tales less strenuous, and admittedly most of these stories are difficult to read, but not solely because of the intense emotions or lack of comedy. What I found most trying were the times when I had a hard time understanding what the characters were saying. This is because in Proulx’s attempt to be authentic, led her to write the accent and jargon of the region very heavily into the dialogue. There were also times in the descriptions when Proulx referenced things that were lost on me, probably because I have no experience with the region or to certain events to which Proulx was referring. This made me feel a bit lost (and even stupid) at times, and sadly, that detracted from my overall enjoyment of this collection.

That said, there were two stories that I really liked. The first was, of course, “Brokeback Mountain,” partially because of the movie. But more than that, I found this story to be practically sparse compared to the film, but the impact was almost equal. I must admit, this is probably one of the best film adaptations of any work of fiction. The other story I really liked was called “A Pair of Spurs” which was one of the stories that felt like the focus digressed several times, but then Proulx brought it all back together with a real beauty and elegance that I found very admirable. The other thing in these stories that impressed me was how Proulx made such fascinating (and sometimes horrifying) female characters with these tales, particularly because our ingrained stereotypes for the Western genre would have us believe of the dominance of the men, with the women either overly tough or frail and submissive. Proulx’s nuances with her female characters were certainly refreshing.

Overall, although I enjoyed most of the stories in this collection very much, and generally appreciated Proulx’s writing style and unique characterizations, I can’t say that I fell in love with these tales. This may be because of the genre, or perhaps it was the heavy use of jargon and slang that kept me from getting truly engrossed in this collection. Despite this, I am certain that people who are true Western fans will really enjoy these stories, so for them I can still warmly recommend them. However, if you aren’t into Westerns, I you’ll probably agree that despite the genre, they’re worthy of a respectable three and a half stars out of five.

“Close Range: Wyoming Stories” by Annie Proulx is available (via these affiliate links) from Amazon, Barnes & Noble, Kobo Books, Kobo audio books, eBooks, iTunes (iBook or audiobook), The Book Depository (free worldwide delivery), new or used from Alibris or Better World Books as well as from an IndieBound store near you.

You can also read my review of Proulx’s Pulitzer Prize winning novel “The Shipping News” which was also made into a movie, but it was a very bad adaptation!

By the way, on May 2, 2018 the Library of Congress announced that they will award Annie Proulx their 2018 Prize for American Fiction! Talk about serendipity!

2 thoughts on “Stories with Spurs”