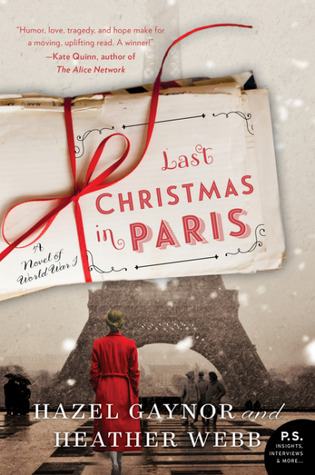 When the “war to end all wars” began in the summer of 1914, British soldiers were sure that they’d all be home for Christmas. Unfortunately, they didn’t know that many of them wouldn’t make it to see that Christmas, or the next or the next one after that. To get to the heart of this era, historical fiction writers Hazel Gaynor and Heather Webb bring us this mostly epistolary work of the letters that Evelyn (aka Evie) Elliott writes and receives from those she loves, including ones she shares with her life-long friend, Thomas Harding.

There’s something very intimate about letters, and telling stories through them can be fascinating and often poignant. However, one of the biggest problems with this mechanic is making the various authors of the letters sound like different people. Thankfully, Webb and Gaynor seem to have mastered this fine art, and each of the characters comes through with just enough variances, and some excellent consistency, that helps us believe that these missives were from different individuals. Gaynor and Webb also intersperse these war-era letters with regular prose introductory passages and a concluding chapter. This is because some things just can’t be described using letters, since all of these take place in 1968, a full 50 years after the end of the war, at Christmastime, in Paris (hence the title of this book) after the death of one of the correspondents.

Epistolary novels lend themselves well to a story involving romance, or at the very least, some kind of close relationship, which either succeeds or fails to develop into something lasting and/or long-term. Webb and Gaynor start with Evie and Tom as being friends at the start of this book (since Evie’s brother Will is Tom’s oldest and best friend), and slowly develop this into something much more. At the same time, we also observe how this terrible war increasingly wears on all of these characters, both mentally and physically. The other letter writers help round out the story, and give the readers pieces of background, while at the same time, assist the various writers in expressing things they can’t say to certain recipients. All this combines into an absorbing story that persuasively unfolds, and written with elegance, even during the most awkward of circumstances.

This book works on many different levels. The writing, the concept and the characters are all there for our enjoyment and empathy. However, one thing didn’t sit completely right with me, and that was the climax. On the one hand, Gaynor and Webb build up the relationship between Evie and Tom to a very crucial point through these letters. To their credit, they achieve this with just the right balance of up-front information and hints for us to read between the lines of what’s left unsaid. On the other hand, the place where I think they could have gotten a real emotional punch out of their readers somehow got lost. This is probably because they wanted to stick to the formula of all the war-era action confined to letters (and some telegrams), and only use conventional prose for the more modern sections. My thinking is, had they allowed themselves to stray from this, and perhaps changed to a third person narrative for just this part, it might have been more poignant for me. That little switch also might have highlighted this section of the story even further. (I’d say more, but that would mean including a spoiler, which my readers know I’ll never do.)

Apart from this one drawback, I truly enjoyed this book. I fell in love with almost every one of the characters writing these letters; that is, after all, what makes a good story. I believe that Webb and Gaynor made a superb team with this novel, where both these authors were truly in their element. I would even go so far as to say that we should include Gaynor and Webb among the best historical fiction writers out there today. I warmly recommend this book and believe it deserves a solid four out of five stars.

William Morrow released “Last Christmas in Paris” by Hazel Gaynor and Heather Webb on October 3, 2017. This book is available (via these affiliate links) from Amazon US, Amazon UK, Amazon CA, Barnes & Noble, Kobo eBooks (USA, Canada & Australia), Kobo Audio books (USA, Canada & Australia), eBooks, iTunes (iBook or audiobook), The Book Depository (free worldwide delivery), new or used from Alibris or Better World Books as well as from an IndieBound store near you. I would like to thank the publishers for sending me an ARC of this novel via Edelweiss.