NAPERVILLE IL (January 8, 2016) — Independent publisher Sourcebooks announces the “Readers, Recommend Your Bookstore” campaign, which will give grant money to three nominated bookstores. The “Readers, Recommend Your Bookstore Campaign” is inspired by the phenomenal support booksellers have given The Readers of Broken Wheel Recommend by Katarina Bivald, which was selected as the #1 Indie Next Great Read for January 2016.

Katarina Bivald’s international bestselling debut novel, The Readers of Broken Wheel Recommend, is a charming, big-hearted story about the joy of books and the transformative power of community bookstores.

“Bookstores are the heart and soul of their community and have enormous impact on readers’ lives,” said Dominique Raccah, founder and CEO of Sourcebooks. “The Readers of Broken Wheel Recommend inspired us to create a campaign that will not only give back to a few deserving bookstores, but hopefully highlight all the many wonderful bookstores that service communities across the country.”

Anyone can nominate their favorite bookstore at http://books.sourcebooks.com/readers-recommend-your-bookstore-sweepstakes/. Sourcebooks will award the winning bookstore with a $3,000 prize; two additional bookstores will each receive a $637 prize (the population of Bivald’s fictional Broken Wheel, Iowa). In addition to bookstores receiving prizes, weekly giveaways for those who nominate will be held throughout the campaign. Voting began January 4, and runs until February 19, when the winning bookstores will be announced. 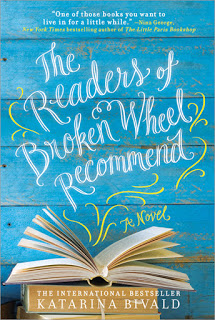 And don’t forget to read my review of this book here.