I wanted my readers to know why I haven’t been posting book reviews lately. The reason is, I’ve been on vacation abroad. The relatively short trip (due to a lack of vacation time at my “day job”) was to visit family and friends, but mostly to attend my 40th High School Reunion. Yes, I’m from the Evanston Township High School Class of 1975 (and yes, I’m that old). I’m glad to say that I had an absolutely amazing time – not the least of which included finding out that at least three of my classmates are librarians (how cool is that for someone who writes a book blog)!

Of course, while I was away, I did get some reading done. I finished reading The Light of Hidden Flowers by Jennifer Handford, which is about a woman who discovers her true calling at age 35, while overcoming her fear of flying and also realizing that her High School sweetheart was “the one” all along. This will be the next book I review here, so watch this space.

I also finished reading My Grandmother Sends her Regards and Apologizes by Frank Backman. You may recall that Backman’s previous novel, A Man Called Ove, was my #1 book of 2014. Well, this book is nothing like that one, however it is fully in the running to be my #1 book of 2015 (I’m not sure yet if Anne Tyler’s A Spool of Blue Thread will beat it out or not). Spoiler alert: DO NOT read the ending of this book in public, unless you’re not embarrassed to be seen crying! Trust me on this.

In recognition of my roots and High School history, I started reading a historical fiction book called What the Lady Wants: A Novel of Marshall Field and the Gilded Age by Renee Rosen. This is the story of the tumultuous affair between Delia Spencer and Marshall Field. For those who are not from the mid-west, Marshall Field is the man who started the Marshall Field’s and Company department store in Chicago in the late 1800s. Many say that Field invented the department store concept, and he most possibly coined the phrase “the customer is always right.” My British readers might know the name, because it was under Marshall Field that a man called Selfridge apprenticed, and led him to open Selfridge’s in London. When I was in High School (and for a few years afterwards while studying in college), I worked for Marshall Field’s in their Evanston store. Unfortunately, several years ago the chain Macy’s bought out Marshall Field’s and Company. Because they refused to keep the original name on the flagship State Street store (all we asked for was a plaque saying “Macy’s at Marshall Field’s”), I vowed to never step into a Macy’s store. 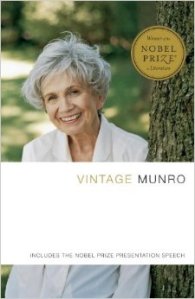 Because this was such a short trip, I didn’t get the chance to buy too many books. Inspired by Backman and bought The Little Old Lady who Broke all the Rules by Catharina Ingelman-Sundberg, as well as The Girl who Saved the King of Sweden by Jonas Jonasson (yes, I like translations). I also picked up a copy of Vintage Munro, a collection of Alice Munro’s short stories that includes her acceptance speech from her wining the Nobel Prize in Literature. I’ve just started reading the first story and already I can see why Munro deserved to receive this prize.

One reading disappointment during my trip was the book The Five Times I Met Myself by James L. Rubart, that I could not finish. I’m sorry but someone should have mentioned that this was Christian Fiction before I asked for the ARC. I don’t really have anything against Christian elements in a book, but this was a bit too much for me (remember, I’m not only Jewish, I moved to Israel). However, what I did read (that didn’t have anything to do with Jesus), was very well written and had some very interesting elements to it. I’m positive this is going to be a hit with fans of that genre – but I’m just not one of them.

One other thing – just before I left for this trip, I succeeded in posting newly edited, full versions of all of my 170 book reviews here. I was going to make some kind of post to announce this accomplishment, but I just didn’t have time (remember that “day job” I have). In the meanwhile, while I was on the road, I was nominated to participate in the Liebster Awards by fellow blogger Annette Steinnetz. I thought it was an interesting coincidence that I got this nomination exactly after reaching this blogging milestone. I’m not sure when I’ll get to it, but it certainly looks like fun.

Thanks for reading (both this blog, and in general)!