Buy it now on Amazon for 99 Pennies…or

read for FREE with Kindle Unlimited.

In this sequel to BANANA BAMBOOZLE, all Cassidy Dunne wants is a road trip to bond with her niece and some gooey campfire s’mores. What she gets is an extra serving of mayhem — marijuana brownies, creepy locals, an ardent admirer, a precocious canine cohort, and a dead body.

Driving an RV from California to Colorado in winter poses plenty of challenges, some of which can be solved, at least temporarily, by her secret stash of candy. But nothing can sugarcoat the clues pointing to her involvement in the murder.

I wagged my tail three times. It was the perfect amount to acknowledge kindness, whether a soft word, a lower-tier treat like broccoli, or, in this case, an obvious statement of fact. I didn’t mind. I understood the limitations of humans.

The sidewalk cleared and I padded to the motorcycle, still smelling of gasoline, leather, and Bea. I circled it, carefully stepping off the curb to avoid the slushy gutter, ending my circuit on the sidewalk near the back tire. I sat, contemplating it from all angles.

I checked the activity in the bank, lowering my head to avoid the glare of the glass door. Nobody in sight. I stood and lifted my leg the way Major taught me. I hadn’t squatted in a while so I had a pretty full reservoir. I let loose a stream of pee that soaked the wheel and left a puddle on the sidewalk. Two shakes of my hind leg finished the job.

They lit a fire and organized camp chairs around it, hauling out as many blankets as they could find. Bundling, layering, and the campfire kept them cozy. Three times Frankie asked if the fire was ready for s’mores yet, and three times Cassidy shook her head. Too smoky, not hot enough, too hot. Finally she pronounced it just right. She showed Frankie how to get the graham crackers and chocolate bars ready.

“How much chocolate do I use?” Frankie asked.

Cassidy frowned. “I don’t understand the question.” She pointed. “Don’t you see how the candy bar, when broken thusly, is exactly the same size as the graham cracker square?”

“What planet are you from?” Cassidy narrowed her eyes. “Anyway … get it all ready before you toast your marshmallow. Timing is everything.” Cassidy passed out the ancient wire coat hangers bent into skewers. “Be careful with those. They’re family heirlooms. Probably my inheritance.”

Cassidy studied the finger she used to poke the dead body. It seemed detached from her hand, like it belonged to someone else. She rubbed it vigorously on her pants. She hobbled backwards across Bea’s office, away from the blood, away from reality, stopping only when her back met the wall. Cassidy had seen enough horror movies to know dead bodies weren’t always dead. Even ones with a gaping head wound.

She slid, wincing, to the floor. Her heart threatened to pound out of her chest. Her lungs refused to inflate. 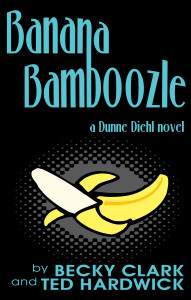 That hysterical woman screaming is not helping the situation. She realized it was her and clamped a hand over her mouth. Whoever killed Bea couldn’t be too far away. And maybe knew she was here. Maybe watched her right now.

Did you miss Banana Bamboozle?

Grab it now for FREE on Amazon.

After imbibing in one too many Banana Bamboozles at a backyard party, Cassidy Dunne is flabbergasted to recognize one of the partygoers as her teenage niece. When she points out the girl to her longtime best friend, Dan Diehl, he revokes her bar privileges, reminding her that one, she’s blotto, and two, the niece in question died in a tragic house fire as an infant fourteen years earlier.

Dan has been involved in thirty years of Cassidy’s bad ideas, but gets sidetracked by an accusation against him with the potential to destroy both his business and his reputation. Cassidy must handle this one alone.

Well, almost alone. Every problem in her life is accompanied — and medicated — by her secret stash of candy. Run-ins with an old high school nemesis. Booty calls with her ex-husband. Her first date in Justin Bieber’s lifetime. Shapeware. All tamed with a candy bar. Or three.

But all the chocolate in the world can’t help her figure out this puzzle. If she’s not prudent, she could ruin several lives. 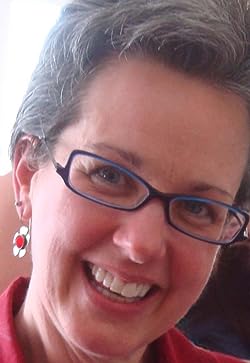 Becky Clark is the seventh of eight kids, which explains both her insatiable need for attention and her atrocious table manners. She likes to read funny books so it felt natural to write them too. She surrounds herself with quirky people and pets who end up as characters in her books. Her stout-hearted dog keeps her safe from menacing squirrels, leaves, and deer, but not plastic bags. Those things are terrifying.

Visit BeckyClarkBooks.com for all kinds of silliness. While you’re there, be sure to subscribe to her “So Seldom It’s Shameful” newsletter. It’s the only place to hear about new releases, to win fabulous prizes, and to find out when books go free. (As you might have gleaned, she won’t inundate your inbox, either.) http://beckyclarkbooks.com/mailing

Because writing takes for-freakin-ever, she gets instant gratification by designing funny t-shirts, mugs, aprons, pet clothing, and other stuff you desperately need. Check out her designs at http://www.zazzle.com/LazySquirrelDesigns

In addition to writing, she has spent time helping parents get their kids to love to read. She’s adapted her workshop into an eBook full of games and ideas to turn your reluctant reader into a Reading Maniac. If you know anyone with a preschooler just learning to read or a child who doesn’t like to read, check out “Reading Maniac” and see if you think it might help them.