Book review for “Frank Derrick’s Holiday of a Lifetime” by J.B. Morrison. 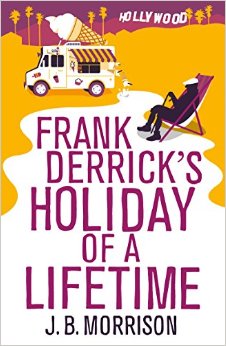 When Beth calls her father to tell him that, not only has her husband Jimmy left her, but also that the doctors found a lump, Frank is understandably worried. At age 82, living on a fixed income, he can’t just pick up and leave the UK to be with her in California. That is, until his landlord offers to give him £5,000 to move out of his apartment. With his granddaughter Laura about to turn 21, what could be more serendipitous? Furthermore, Frank’s visit can only help Laura carry with her plans to get Jimmy and Beth back together.

Excuse me if I’m prejudiced towards this novel, but I so loved Morrison’s first Frank Derrick book, that I just had to read this one. Of course, when reading a sequel of a beloved book, there’s always the chance that it won’t live up to the delight you found in the first one. In this case, I was just a tad bit disappointed. While I found Frank to be as delightful and funny as he was in the first book, I think the premise behind this novel let Morrison down, but only slightly. By this, I mean that there isn’t enough buildup of Laura’s “reunion project” to bring about a truly rousing climax. Yes, there is a climax, but it is an accidental one, which just happens to add another element to Laura’s plan. My thinking is, had Frank been more involved in the plan, the conclusion of the book would have been just a bit more poignant.

Despite this, the climatic incident is still quite funny, and that it ends up as bit of serendipity for promoting Laura’s plan, is a nice little plot twist. The other plot twist was one I had wished wouldn’t happen, but knew it would all along. When Frank gets that £5,000 offer, he is fully aware that taking it will make him homeless not long after his return. Because Beth has enough to deal with, he decides to lie to her about where he got the money to finance his trip. Inevitably, truth will out, but I was hoping that solving that problem would end in a different result, despite realizing how unrealistic that wish was, overall. (If this sounds vague, I apologize. I’m simply trying not to include any spoilers here.)

This isn’t to say that I didn’t like this book, because I certainly did. Once again, Morrison gives us a protagonist who, despite his mostly negative view of the world, suddenly has an opportunity to smile and be positive. Yes, Frank still is cynical and reclusive, but he adores movies and film-making almost as much as he does his daughter and granddaughter. With this trip, Frank is getting two for the price of one. To top that off, he also gets the balmy warmth of California with its clear skies and an ocean bluer than he ever imagined. What a change of pace from his gray and cold England. All of this delight just sings off the page, making it a very fast read where you’ll find yourself giggling and guffawing, if not laughing aloud at practically every turn. It was especially fun that Morrison included many US vs. UK comparisons, like the difference between Milky Way bars and Mars Bars in the two countries. Not to mention how Frank surprises his granddaughter with how clued in he is regarding pop culture, despite his cluelessness in so many other areas.

In short, Frank Derrick is an enigma, but one whose very contrariness is a joy to behold, and we revel in his being such a delightful person to puzzle over. If you didn’t read Morrison’s first Frank Derrick novel, don’t worry – there’s just enough background information here to keep readers from feeling they missed something, and more than enough to encourage them to read it as well. I just flew through this novel (which is a feat for me, because of my mild dyslexia) just because I was having so much fun. For this, I will wholeheartedly recommend this book, but I’m afraid that I’m giving it only four and a half stars out of five, as I think I liked the first book just a tad better.

“Frank Derrick’s Holiday of a Lifetime” by J.B. Morrison, published by Pan Macmillan, released June 4, 2015, is available (via these affiliate links) from Amazon, Barnes & Nobel, Kobo Books (for other eReader formats), the website eBooks.com, iTunes, The Book Depository (free worldwide delivery), new or used from Alibris. I would like to sincerely thank the author for getting his publisher to send me a copy of this book for review via NetGalley.