Book Review of “Lessons in French” by Hilary Reyl. 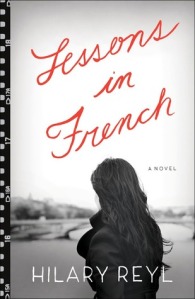 What budding artist wouldn’t grab the chance to work in Paris with the world-famous photojournalist Lydia Schell? For Katherine, who just finished Yale, it will also be like going home, having lived in Paris as a young girl when her father was dying from cancer. Back then, she stayed with cousins and their son in a poor part of the city. Remembering that time, including her cousin Etienne’s cruelty to her, still hurt, but they aren’t going to get in the way of making new ones. This time Kate will be renting a room in the Schell’s house, located in one of Paris’ most classy neighborhoods. So what if Kate doesn’t know how difficult Lydia is, or what she’ll be doing for her? How hard could it be for a Yale graduate with unaccented and fluent French in the city of every artist’s dreams? Furthermore, the Berlin Wall is about to come down, so this is the perfect time to work with a photojournalist.

The back cover of this book calls it a coming-of-age novel reminiscent of “The Devil Wears Prada.” Certainly Lydia is very much a ‘boss from hell,’ in treating Kate more like a dogsbody than an assistant. But she’s not the only one. Lydia’s husband Clarence is working on a book during his sabbatical, and when Lydia is away, Kate must have time to help him, surely? It doesn’t matter that he has his own assistant, the dark and mysterious Claudia, because she is working on her own thesis. The Schells also need help with their daughter Portia and her breakup with Olivier, as well as with Orlando, the dog belonging to their errant son Joshua. In short, Kate is at this family’s beck and call, both physically and emotionally. That doesn’t mean that her year in Paris will be without a bit of romance, but this bunch are going to complicate even that.

The question is where does Kate come into all this? How can she develop her own style as an artist, and her own self as a person, if she’s mirroring everyone and everything around her? This is the essence of this book. With drawing Kate into all their deceptions and dramas, as an individual, Kate is floundering. Kate even says, “I ventured the idea…that I was living inside a Picasso, where everyone talked to me about everyone else so that I saw their lives from all angles while they had no idea about mine.” We also realize how terribly needy Kate is, how much she desperately wants to be loved, and how blind she is to seeing people as they really are. This book would have been much more dramatic if Reyl had not used Kate as the narrator of her own story. Because of this, we have a hard time picturing Kate, which should have been clearer, despite Kate’s declaration that “In Paris, I am virtually transparent.”

In sharp contrast to this, the descriptions of Paris are so vivid, that one can easily envision every scene. Obviously, Reyl loves Paris, and knows it well, and if the story seems very personal, it is a metaphor, as well. Lydia’s photography is described as having the genius quality of making the picture seem as if the scene portrayed is through the eyes of the subject. This is exactly how Reyl gives us Kate’s Paris. Further, Kate learns that a photograph is more about framing the subject, than it is the subject itself, and Paris is the frame for Kate. Reyl portrays all this with a praiseworthy narrative style, with fluid prose and a strong voice.

As amazing and ambitious as all this sounds, unfortunately, this book falls just a little short. On the one hand, Kate’s naivety persists far longer than it should, delaying her personal growth in the story. When the lights finally do come on, it happens too suddenly, practically blinding us with its flash. Despite this excellent photography metaphor, that’s unsettling for the reader. We wonder about the incongruous actions of some of the characters, despite their deceptive natures. It frustrates us to wonder why Kate doesn’t get it sooner; certainly, a Yale graduate can’t be that naïve. Finally, that ‘transparency’ that Kate displays with such honor, distances her from the reader, making her less sympathetic. With so many of characters being dis-likable, and the few nice ones pushed to the background, the book has a slightly bitter aura to it. Even so, Reyl knows how to get her readers caught up in her settings, making Paris into a magical city we want to discover.

Overall, Reyl is a talented writer, and perhaps she just needs a story that isn’t so obviously personal in order to allow her to develop it fully. With all its drawbacks, the Paris of “Lessons in French” by Hilary Reyl makes this worth a read, but only deserves three out of five stars.

“Lessons in French” by Hilary Reyl is available (via these affiliate links) from Amazon, Barnes & Noble, Walmart (Kobo) US eBooks, the website eBooks.com, iTunes, the Book Depository (free worldwide delivery), new or used from Alibris, Better World Books or from an IndieBound store near you. I would like to thank the publishers for sending me the uncorrected proof copy of this book for review via Curious Book Fans. This is a revised version of my review on that site, which was also published (under my username TheChocolateLady) on {the now defunct} sites Dooyoo and Yahoo! Contributor Network.