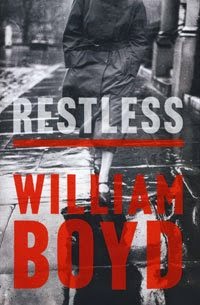 Ruth Gilmartin is a single mother, working on her Master’s Thesis and teaching English as a Second Language in Oxford. Her mother, Sally, has decided to write down the story of her experiences during WW2 and give them to Ruth. This is when Ruth discovers that the woman she grew up with was actually Eva Delectorskaya; a Russian recruited to be a spy for England who moved to Paris in 1939 after the discovery of her brother’s dead body. The problem is Eva is certain that her story didn’t end there, and now she feels it may be time for her last job. Unfortunately, without Ruth’s help, she can’t accomplish her mission.

I’m not a spy thriller type of person, but this book isn’t totally in that genre. Boyd’s novel is more a psychological investigation into deception and self-discovery then a real spy novel. The action takes place over the unusually hot summer of 1976, while Eva’s story takes place over 35 years prior. This gives us two stories here – Eva’s past, and Ruth’s present. As the story progresses, things within these women’s lives also heat up. One of Ruth’s students professes his affection for her, while she ends up with house-guests that might be running from trouble abroad. Sal’s actions seem to become erratic while at the same time she reveals the carefully planned out steps she took to go from being Eva to the mother and grandmother she is today.

Finding out that your mother has lived her life as a lie, certainly can be an eye-opening experience. This makes Ruth begin to wonder about her relationship with her mother, as well as how her own life is progressing. Finally, Boyd also uses the upsurge of protests against the Shah of Iran that took place at that time to remind us what we thought then is far different from what we know now. This last element is the main theme of this book – an analysis of the past as a motivation for action in the present.

While this seems complex, especially for a novel of only 325 pages, Boyd’s prose actually has a very calm feel to it. In fact, I couldn’t help noticing how consistent and evenly written this book is. The language is carefully “matter of fact,” which feels well balanced, but almost emotionless. This lends itself to the mysterious atmosphere of the book and is a good counterpoint to the mixture of feelings that both women experience. In order to tell both these stories, the point of view here shifts between Ruth and her life, and Sal’s story of Eva, through alternate chapters. This tried-and-true literary mechanic lends itself perfectly to such parallel stories, and allows two voices to run consecutively throughout the book. Rather than using two first person accounts, Boyd has opted for third person, which lends an air of detachment, while allowing us to observe these women’s inner worlds as well as their physical actions. That Boyd actually gets into the hearts and minds of these two women is his way of attaching intimacy to a usually impersonal point of view.

All the more remarkable here is that Boyd – being a man – has been so very able to portray two women. That’s not often the case, and most writers are usually better at writing characters of their own gender. However, you don’t actually get to feel very close to either of these women, and it isn’t as if you’ll have a terribly clear picture in your mind as to what they look like. Still, even without that Boyd manages to make us feel real empathy for these characters, which is truly an achievement. Moreover, the character development here is practically graceful, as if things happen almost in slow motion. Even so, we also feel the ramifications of each step are ones that could easily snowball out of control.

I particularly liked how this book ended. Without overly tying up all the loose ends, there certainly is a feeling of conclusion. Yes, we are left with certain questions, but none are terribly important, so we don’t feel cheated or at a loss when we turn the last page. We also get the feeling that these women’s lives will continue after this story ends, although never the same as before. To me, this is essential to a character driven story, where each one feels like real, flesh and blood.

I’m sure you can tell that I think this is simply a wonderful book. The beautifully drawn characters develop with an increasing tempo, revealing just enough to keep our interest. The plot is deceptively simple, while layered with psychological and emotional issues. Boyd also uses parallels and metaphor to point up certain internal aspects of these women’s tales, without getting overly dramatic. This isn’t a fast-paced spy novel, but it never lags and you’ll find yourself wanting to know what’s going to happen on the next page. Bottom line: this is a very interesting story and Boyd writes it with total aplomb. I’ll give it a full five stars out of five and highly recommend it.

“Restless” by William Boyd is available (via these affiliate links) from Amazon, Kobo Books (for other eReader formats), the website eBooks.com, iTunes (as an iBook or audiobook), The Book Depository (free worldwide delivery), new or used from Alibris, Better World Books or from an IndieBound store near you. This is a revised version of my review on Curious Book Fans (under my username TheChocolateLady), which previously appeared on {the now defunct} sites Dooyoo and Yahoo! Contributor Network.

4 thoughts on “The Calm within the Storm”