Book Review of “The Lost Art of Keeping Secrets” by Eva Rice. 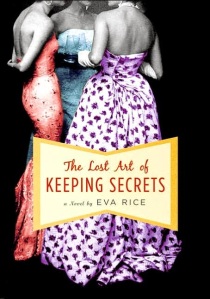 Before there was Elvis, there was Johnnie Ray – an American pop singer who made girls all over the world swoon, and teenaged Penelope Wallace was one of them. Before there was Charlotte Ferris, it seemed like Penelope was living in a dreary world of post-WWII England, still rife with shortages – especially cash. But when Charlotte meets Penelope waiting for a bus and practically kidnaps her for an afternoon tea at her Aunt Claire’s house, everything changes, not just for these two girls, but for just about everyone in both their families. As these two upper class but financially impoverished 18-year-olds become fast friends, the learn more about each other, their worlds and the people in them. What’s more, it seems like everyone has some sort of secret to keep.

On the surface, one might think this book is “chick-lit.” In fact, throughout most of the story, you may get the distinct feeling that the romance elements are very much in the forefront of the plot. We have Charlotte’s cousin, the fascinating looking Harry who wants to be a magician and is in love with an American actress who just dumped him for a man with more means. As Harry ropes Penelope into a scheme to get her back, we know something is going to sizzle. Charlotte too has eyes for a boy, one of the “Teddy boys,” who her Aunt doesn’t approve of. Then there’s Rocky, the dreamily handsome, much older American man from Hollywood who meets Penelope on the train. In addition, with Penelope living in the shadow of her famously beautiful widowed mother, you can just guess where at least some of the secrets will be, and that love is at the center of all of them. Even Penelope’s younger brother Inigo is in love – but that’s with Rock & Roll music.

However, on closer examination, the story here is a touch deeper than most “chick-lit”. In fact, many people might find that this is more of a ‘coming of age’ novel, and could almost be appropriate for the young adult market. This wouldn’t be far from correct, except for the fact that it seems a bit more sophisticated than that market usually requires, and the subtleties of the text and its underlying meanings would probably be lost on most teenaged readers. No, this is an adult novel, which lies on the cusp of the literary and women’s fiction genres. This isn’t to say that men might not enjoy this book, but they’d probably need to quite in touch with their feminine side in order to do so. Of course, included here are the timeless themes of fads and fashion mixed with music and society, are ones anyone can identify with.

Written in first person from Penelope’s point of view, Rice gives us an excellent look at the people with whom Penelope interacts. We are able to get to know Penelope as well, since much of the story is in past tense, giving a retrospective feel to the events. This nicely mirrors within the story through the autobiography that Aunt Claire is writing with the typing assistance from her niece, Charlotte. Another nice addition to this is the fact that Penelope is not only reading literature, but seems to be interested in becoming a novelist herself. While there’s no “story within a story” here, the connectivity of writers and writing is evident throughout. Moreover, as Penelope unravels her tale, we get the distinct impression that this is the fodder for her first real book, much as if it is for Rice herself.

The overall feel of this book is one you could describe as a “summer novel.” The tone is mostly lighthearted and the language is both clever, and easy to read with a simple beauty to it. Even the more serious passages receive a gentle handling that pulls the reader in and takes them for a ride. When Rice describes the seasons and the views from in and around the majestic stately home of Milton Magma, where Penelope lives, one could swear her words could be set to music. In this Rice reveals that some of her talent comes directly from her lyric-writing father Tim. One particularly nice thing about this book is that you won’t realize until the end just how complex these character’s lives really are, yet they are able to almost breeze through the troubles not fully understanding how they’ll come out of them, and what effect they’ll have.

In all, “The Lost Art of Keeping Secrets” is a lovely novel. The writing is lovely and the story is interesting with characters you can easily picture in your mind’s eye. Eva Rice has a way of enticing you to read on and then adds some interesting twists just to keep you interested. There was only one, slightly bothersome loose end at the finish, but the ending brings closure that avoids being sappy. When you close the book, you’ll feel like you have a good idea what will happen next in these people’s lives. Moreover, Rice seems to have done her homework on the period, and included some nice touches along the way – not the least of which interesting me in looking up some Johnnie Ray songs. For all this, I can recommend this book with a solid four out of five stars. (Note: Eva Rice is the daughter of Sir Tim Rice, British lyricist and author, known mostly for his musical collaborations with Lord Andrew Lloyd Webber!)

“The Lost Art of Keeping Secrets” by Eva Rice, published in 2005 is available (via these affiliate links) from Amazon, Kobo (Walmart) eBooks and audiobooks, eBooks.com, iTunes (iBook or audiobook), The Book Depository (free worldwide delivery), new or used from Better World Books (to promote libraries and world literary) and Alibris, as well as from an IndieBound store near you. This is a slightly revised version of my review that first appeared on Curious Book Fans, and under my username TheChocolateLady on {the now defunct} sites Dooyoo and Yahoo! Contributor Network (aka Associated Content).

One thought on “An Artistic Novel, and that’s No Secret!”