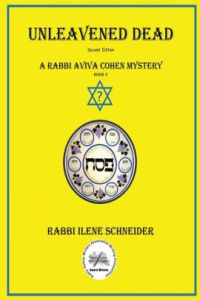 Those of you who have read Ilene Schneider’s first book – Chanukah Guilt – will remember our beloved Rabbi Aviva Cohen. She’s the unruly-haired, rotund rabbi of the small, Walford New Jersey synagogue ‘Mishkan Or,’ who has been divorced twice, and has a lesbian niece Trudy, who now has two children with her partner Sherry. What’s more, mysterious deaths have been coming to her attention, and she just can’t keep from trying to solve them – much to the chagrin of her ex-husband Steve who’s been working in Walford as the interim Police Commissioner.

This time, in the midst of preparing to preside over a wedding taking place the day before the most stressful of all Jewish holidays, Passover, Aviva is very busy. She has to clean her house and cook for the holiday, in between her regular duties and attending a conference of the International Rabbinical Association. While at the conference, she hears of the carbon monoxide poisoning deaths of the Fischers. She soon finds out one of her rabbinical school classmates, Ben Bronfman, performed ceremony for the Fischer’s daughter Audrey’s marriage to George. However, Ben didn’t know George wasn’t Jewish until he was about to sign a contract with another synagogue in Walford – B’rith Abraham – that included a no intermarriage clause. When his wife Sandy finds out she’s furious that Ben may have unknowingly ruined what could be his last chance at gainful rabbinical employment. What’s more, there are aspects of the accident that don’t sit right with Aviva.

Aviva hardly has time to dwell on that when there’s more bad news. The university where Sherry was running the counseling center hired a new head of the psychology department – John Quincy Moorhouse. Part of his job included taking over the counseling center, and the first thing he did in that position, was demote her to practically a desk ornament. Of course, that made Sherry violently angry, and she quit in a huff. The timing for this couldn’t have been worse. Sherry and Trudy were planning to get married, but now Sherry says she can’t go through with it until she can contribute to the home. When her new ex-boss dies in a hit-and-run accident, Sherry is the #1 suspect. When Aviva finds out Sherry had a ‘fender-bender’ the same night Moorhouse was killed, even she had some doubts about Sherry’s innocence. However, if this Moorhouse was so rude to Sherry, he might have angered others. That’s when Aviva realizes she must get involved – to save Sherry and make sure she and Trudy can get married.

That’s not all, but you’ll have to read the book to find out more. What will strike readers of this book is how well all the many different plot lines are kept separate until they need to come together to assist Aviva in solving the crimes. Where Schneider’s first book was a little too obvious regarding the real culprit, here readers won’t be so sure they know “who dunnit” until almost when Aviva herself figures it out. This is a real improvement and Schneider should be very proud. She leads us down a few blind alleys throughout the story, which is just as it should be. This gives the reader a heightened sense of mystery, making the solving of the crimes even more enjoyable.

As before, Schneider knows how to make the good characters sympathetic to her readers, and the bad guys unlikable. What’s more, where some of the characters in her first novel got slightly more “text time” than their importance to the story, here Schneider has given us a much better balance. For instance, we don’t meet the dead Moorhouse – nor should we. His past is what is important, and we find out just enough about that to understand that he’s got many more enemies than just Sherry. All this comes through as part of Aviva’s investigations, rather than via some extraneous descriptive passages. Moreover, the comic elements that Schneider gave Aviva in the first novel have been carefully honed and perfected. Schneider evokes everything from sly smiles to outright laughing, all with a light, conversational “breaking the fourth wall” style that speaks directly to the reader, without the dark undertone of a “film noir” voice-over. Through this, it seems, Schneider has truly found her unique voice.

Of course, most Jewish readers will easily sympathize with the stress of preparing for Passover combined with everything else going on. Schneider has also made it so that even non-Jews will probably get it as well. On the other hand, some of slightly elaborate descriptions of Aviva’s cooking don’t add all that much to the story. This includes such passages as the onion-chopping scene, which is a joy to read. Although her reddened eyes add something to the next scene with Steve, I’m not sure we really needed a full step-by-step of the all Passover recipes. In fact, one wonders why so much about food comes into this story. In her defense, it does help us remember that the rabbi is overweight. As a result, while I think some of those sections need editing, they certainly can stay.

However, that’s really the only drawback of this book. In short, with “Unleavened Dead” Schneider has given us a plot that has just the right amount of complexities, interesting characters to both love and hate, enough twists to keep us guessing throughout the story, and a Jewish holiday setting that adds to the stress. With this second novel, Schneider is very much coming into her own, and getting better at it along the way. There is no doubt that whatever she comes up with next for Rabbi Aviva Cohen, it’s going to be both a thrilling and humorous romp, and I can hardly wait! I can wholeheartedly recommend this novel and I give it a solid four stars out of five.

“Unleavened Dead” by Rabbi Ilene Schneider, was first published by Oak Tree Press (Dark Oak Mysteries) December 12, 2012 is available (via these affiliate links) from Amazon, Barnes & Nobel, from The Book Depository, or from an IndieBound store near you. I would like to thank the author for sending me a copy of this novel for review. This is a revised version of a review that originally appeared under my username TheChocolateLady on the {the now defunct} sites Ciao, Dooyoo and  Yahoo! Contributor Network.