Book Review of “The Fry Chronicles: an Autobiography” by Stephen Fry 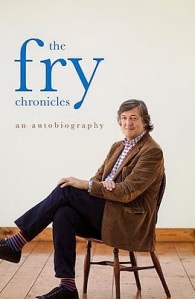 This is Stephen Fry’s second installment of his autobiography. The meat of this book takes place during his most formative years – those being while he was at Cambridge and the years afterwards as he was making his name in print, radio, television and on the stage. Once the world started to sit up and take notice, his talents as a comedian and an actor and a writer brought him fame and fortune.

While this book drops names more often than you’d drop your shorts to change them, Fry is almost never patronizing or full of himself. His self-depreciating nature and general dissatisfaction in his looks, combined with a large slathering of insecurity is more than obvious here. You’ll find out about how he met Hugh Laurie, what his addictions were back then, and all the while giving you hints into his present life with nods to his younger years as well. He holds little if anything back, and throughout the book, you feel like he’s writing just for your eyes only. However, the most charming thing about this book is that you’ll find yourself laughing aloud at every turn of the page.

One thing you’ll notice here is that all of his chapter headings start with the letter “C”. Perhaps this is because most of this book talks about his college days at Cambridge; both of which star with the letter “c”. Of course, it could be because he’s a comic. Then again, maybe it’s because this is a chronicle of his climbing career. But for whatever reason he chose the letter “c”, it certainly was a fruitful choice, and worked with exactly the amount of wit and intelligence which personifies such an amazing man.

Having not had the advantage of reading his earlier autobiography “Moab is my Washpot,” I may have been at a slight disadvantage here. There were in some places passages which referred to this first book which covered his first 20 years of life, which did leave me a bit confused. Despite the fact that he noted them with a dagger symbol (†), I couldn’t help but think that every time I saw one of these, perhaps he was berating me with this little knife because I started reading the 2nd part of his life before having concluded the 1st. Still, I don’t think that I missed out on too much, and I couldn’t, in all honesty, say that I felt left out of most of the in-jokes associated with this. I will, however, note that I probably will be purchasing his first autobiography at one point in the future. One doesn’t want to feel like they missed any of the best bits just because they were a touch late to the party, do they?

Granted, not everyone likes to read autobiographies. Even more granted is that not everyone likes Stephen Fry or his type of humor. However, if you happen to find yourself not included in the latter group, then this book might just change your mind about the former. In which case, I highly recommend you read this most impressively entertaining book, and get to know one of England’s comic jewels in its crown. All hail and five stars out of five.

“The Fry Chronicles” by Stephen Fry published by Penguin, September 13, 2010 is available (via these affiliate links) from Amazon, Kobo (Walmart) eBooks and audiobooks, the website eBooks.com, iTunes (iBook or audiobook), The Book Depository (free worldwide delivery), new or used from Better World Books (to promote libraries and world literary) and Alibris, as well as from an IndieBound store near you. (This is a revised version of my review published under my username TheChocolateLady, which appeared on {the now defunct} sites Dooyoo and Yahoo! Contributor Network.)

One thought on “A Fry-ed Life”