Book review of “The Hand that First Held Mine” by Maggie O’Farrell. 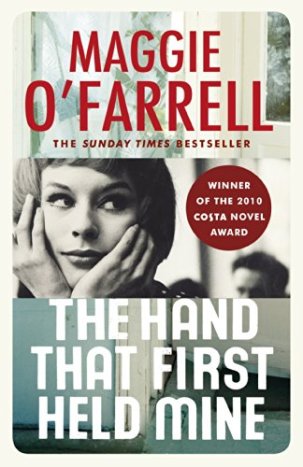 Alexandra is stuck in rural England, living at home, sharing her bedroom with siblings again, after being sent down from university for going through the wrong door – an act for which she refuses to apologize. But it is the mid-1950s and she’s ready to make her mark on the world. So, she packs up and makes her way to Soho in London – with little more than the card a stranger gave her, and the new name he gave her – Lexie. Fast forward to the present and we find Ted has just weathered almost losing the woman he loves, Elina, while she was giving birth to their son. Although Elina is on the mend, something is happening to Ted that seems both strange and sinister. This is the story of how these very diverse stories, set 50 years apart, come together.

The story here is precisely O’Farrell’s forte – taking two (or sometimes more) characters or situations that seem disconnected, and bringing them together. The novel switches between the two very smoothly, even as the plots unfold during two different eras. Using different time-lines works very well in keeping separate voices during co-existing stories, but generation jumps work even better, and seem to allow us to even further focus on the stories. And although the action in the book fascinates us, this is really a character-driven story, and O’Farrell knows full well how to develop characters, making them realistic, but never predictable.

This O’Farrell does using the third person voice for her novels. While many may think that this voice is less personal than first person, there is an advantage. With third person, she is able to delve into the types of things about her characters that they wouldn’t be revealing had she used a first person narrative. Plus, she does this with such a minimal amount of background descriptive passages that as soon as we read the first line, we are thrust directly into the story and these lives. Combine this with a talent for almost poetically constructed prose, that’s still approachable by not being flowery by using simple language and the magic begins.

In addition, O’Farrell’s theme to this book is a universal one that anyone can identify with. Here she investigates self-discovery, answering the questions that the past has put up for you, while finding your way in your daily life. While this sounds dry, we also see how lies and deception can put us off course, and even affect us physically as well as emotionally – which is also a classic O’Farrell theme. For instance, in the older timeline, Lexie falls for Innes Kent, whose wife’s cruelty and vindictiveness towards him is unwarranted, stemming solely from her own guilt. In the present, Ted is suddenly getting flashback memories from a time in his childhood he previously didn’t recall, and they’re giving him headaches and blurry vision. As the mysteries of these two eras gradually come to light, the reader gets increasingly involved in the story, making this very much a page-turner.

I’ve said it before, but it bears repeating; Maggie O’Farrell is an amazing writer. Reading this book as she slowly brings these characters into our minds, hearts and the world, is like taking small bites out of your favorite food, and letting it settle in your mouth and then allowing it to slowly be consumed, taking as much pleasure out of every flavor and nuance of texture possible. Furthermore, how she brings the two stories together was like watching someone learn how to shuffle a deck of cards. She edges the ends closer and closer together until each pile integrates into the other, while remaining separate. It’s this delicate balance between the whole and the sum of its parts that makes this so marvelous. And to top it all off, this novel will affect you emotionally, with a perfect ending, which follows a climax with such intensity that you might even find yourself crying uncontrollably (as I did).

Don’t get me wrong, just because this made me cry doesn’t mean its “chic-lit.” On the contrary, this is literary fiction. I am certain that anyone who enjoys a beautifully written book with fascinating characters, a story that keeps you interested, and a style that is both unique and easy to read, will love this novel. This book deserves to receive a full five stars out of five, and I can recommend it wholeheartedly.

“The Hand that First Held Mine” by Maggie O’Farrell is available (via these affiliate links) from Amazon, Foyles, WHSmith, Waterstones, Kobo Books (USA, Canada & Australia), iTunes (iBook or audiobook), The Book Depository (free worldwide delivery), Bookshop.org, UK.Bookshop, new or used from Alibris or Better World Books as well as from an IndieBound store near you.  (This is a revised version of my review that originally appeared under my username TheChocolateLady, on {the now defunct} sites Dooyoo and Yahoo! Voices – aka Associated Content.)