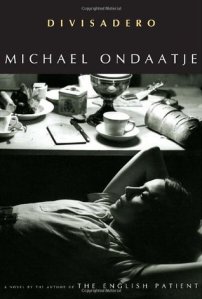 Here is a book for which it is almost impossible to write a plot synopsis. Like many of Ondaatje’s other works, this doesn’t have narrative that follows conventional literary patterns or rules. Although there is an overall linear aspect to the novel, the general feeling is more of a shifting spiral. I’m sorry if this doesn’t make sense, but I can’t help what I feel about a piece of art.

The book opens introducing us to two girls – Anna and Claire – who live with their father on a farm in northern California and their farmhand named Coop (short for Cooper). Technically these girls weren’t biological sisters. Their father adopted Claire when he found her mother had died in childbirth. What’s more, that same week his wife also died giving birth to Anna. After some investigation into the relationships between these four people, the book then shows how events tore them apart, focusing on Anna, Claire and Coop separately. With Anna being the sometimes narrator of the story, we also get involved in one particular segment of her adult profession, that being her research into the life of the poet Lucien Segura. The connection here is Raphael, the son of one of Segura’s neighbors, and how he becomes involved with Anna. From there in the story, we leave these initial characters and become fully involved in Segura’s story, and his relationships, which almost felt like two novels in one – somewhat.

I say “somewhat” because of the title of this novel. It comes from a street in San Francisco – where Anna lived at one point. In the book Ondaatje has Anna explain the origin of the name of the street probably means ‘division’ but also she theorizes that it could come from a verb in Spanish ‘divisar’ which means ‘to gaze at from a distance’. In this, we find that the title of this novel is a metaphor for the book as a whole. Both the modern characters and the historical ones find their lives divided by something at one point. They also feel connections to each other, as well as their pasts, which shaped their lives and brought them to the point where Ondaatje places them in his narrative. If we look at it this way, we see Anna views Segura’s life from this distance that shows her own life divided between her research and her relationship with this person from Segura’s past. In fact, each of the story’s different relationships is carefully inspected using both possible terms of the definition of the novel’s title. Moreover, the novel starts with a tight group of four people divided by situations and life itself. While the street is just a footnote in the story, the name is not just a metaphor for the book, but also a perfect distillation of this novel as a whole. This is something that perhaps only a poet could do, and as Ondaatje is a poet, it isn’t surprising he achieved this.

This might sound complex and even unapproachable, but it really isn’t. Ondaatje’s prose is, as usual, very poetic while being smooth and inviting as well. This is Ondaatje’s particular talent and one that I’ve yet to see equaled by any other author, past or present. Every word seems carefully chosen for its evocative value without any parts of the narration feeling the least bit stilted or bombastic. Ondaatje also doesn’t bother with typical literary convention such as showing conversations within quotation marks or any “he said” or “she said” additions. Despite this confusing technique, I can assure you that when you read this or any of his books, you’ll know exactly what’s going on. Even without punctuation, we feel the characters’ speeches since he is so well able to give each character their own voice, while giving the descriptive passages a different feel altogether. This is typical of Ondaatje, and I’m always amazed at how well this unconventional style works, and how comfortable it feels to read. Certainly this is one of the reasons why I adore Ondaatje’s work so much.

Of course, not everyone will enjoy this book. The mood that Ondaatje injects is such that I’ve always felt like everything has a sepia tinge to it. Again, I’m not sure this makes total sense, and probably makes Ondaatje’s novels sound overly somber, which again, isn’t the case. No, this isn’t a comedy, but that doesn’t mean there aren’t brighter and more positive sides to this story. However, Ondaatje likes to set the stage for his characters in so you feel both involved and distanced from them. For this particular novel, this counterpoint works particularly well since we get both a present day story (Anne, Claire, their father and Cooper) as well as delving into one in the past (Lucien Segura).

Mind you, this style doesn’t make for a quick, easy read, despite its being a relatively short novel. This isn’t a ‘summer vacation’ novel and you’ll need to concentrate on this book, but once you start it, I’m sure you’ll be happy to comply. Which makes me think that there’s also a flip side to this novel’s title, since I think this is a book you’ll want to read very carefully – as the title of this review implies.

However, because of this, I can’t say that this would be a good introduction to Ondaatje’s work. If pressed, I’d say his more approachable novels are “Anil’s Ghost” and “The Cat’s Table,” because of their more conventional styles. On the other hand, if you’ve enjoyed any of Ondaatje before, or are looking for something that’s different from anything you’ve read before, I highly recommend you read this book. The writing is superb and the stories here are fascinating with true-to-life characters you can believe in. What’s more, this book will engage your imagination so much you might want to read it all over again the moment you’ve finished the last page. For all this, I give this novel a solid four and a half stars out of five.

McClelland and Stewart published “Divisadero” by Michael Ondaatje in 2007. You can buy this book (via these affiliate links) from Amazon, Foyles, WHSmith, Waterstones, Kobo Books, eBooks.com, iTunes (iBook or audiobook), The Book Depository (free worldwide delivery), new or used from Alibris or Better World Books (where your purchase supports libraries and world literacy), Bookshop.org, UK.Bookshop, or from an IndieBound store near you. (This is a revised version of my review that appeared under my username TheChocolateLady, on the now defunct sites Dooyoo and Yahoo! Voices aka Associated Content.)

One thought on “Up Close and Undivided Attention”