Book Review for “The Boston Girl: A Novel” by Anita Diamant. 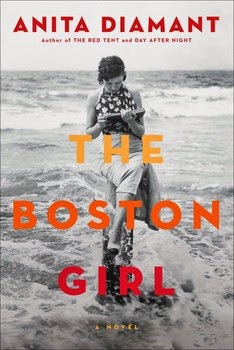 Addie Metsky (nee Baum) was born in Boston to Jewish immigrants in 1900. She’s now 85 and her granddaughter Ava wants to know how she became the woman she is today. This is her story, and it will surprise you.

I’m quickly becoming a big fan of historical fiction. I love the way it transports me to another time and place. If it has a Jewish theme, that’s certainly going to catch my attention. This is why I asked for this book. Of course, the story of the daughter of Jewish immigrants to America isn’t new territory by a long shot. In fact, many would dismiss this book immediately based solely on this blurb. That Anita Diamant, a well-known author, wrote this is certainly one selling point. The question is does this book live up to its author’s name?

My answer to that is both yes and no. Because of my vacillation, let’s start with the “no” part, only because I prefer to get the bad news before I hear the good news. I’ll start with my usual niggle regarding Jewish accuracy. That is, in this story Diamant says that someone died on Thanksgiving, and then she says that the shiva ended on Sunday. Even the most irreligious of Jews of that era would have had their family member buried by Friday, and followed Jewish tradition as closely as possible. That means the mourning period starts on Friday but because of Shabbat, although the actual shiva would have started Saturday night and finished the following Thursday morning. Sorry, but Sunday would have been either too early or too late to end the shiva. Thankfully, that was the only outright error I found in this book.

However, there are other reasons why I wasn’t completely enamored with this novel. To begin with, most of Addie’s story ends in 1931 and then she skips forward to 1985 and the interview with her granddaughter. There we get a few mentions of what happened after that, including Addie having her daughters and how she developed her career. On the one hand, I have to admit that the drama of Addie’s growing up and becoming so different from her parents was fascinating. On the other hand, I would have been happy to forego some of that in order to hear more about Addie the professional.

I was also hoping that this relatively mundane subject matter would receive a treatment that would make it particularly unique. Instead, what we have here is one woman’s story of her life, told chronologically, for an interview. That just seemed a bit too commonplace a mechanic for someone whose story was really quite special. Of course, it could be that telling Addie’s exceptional story in such a straightforward way was Diamant’s version of irony. Addie almost downplays her brilliance by talking about it all as if she was almost typical of her day and age.

Now that I think of it, this is probably what kept me reading this book to its conclusion. The simplicity of this story is ultimately deceptive. Furthermore, Diamant’s unpretentious prose has just the right amount of vitality to make Addie a sympathetic and compelling character. In this way, Diamant takes plain storytelling to a much higher level and this proves that sometimes even in literature, less can really be more. While I’m not sure that this book will appeal to everyone, I do think it is more complex than the plot summary would suggest, and would recommend it to people looking for something charming to read – because despite sounding mostly negative here, this is a delightful book, from start to finish. For all of these reasons, while in general, I enjoyed this book, I can’t honestly give it more than three and a half stars out five (although I’m sure many would give it much more).

“The Boston Girl” by Anita Diamant published by Schribner (a division of Simon & Schuster), released December 2, 2014 is available (via these affiliate links) from Amazon, Walmart (Kobo) eBooks, the website eBooks.com, iTunes iBook, The Book Depository (free worldwide delivery), new or used from Alibris, used from Better World Books (promoting libraries and world literacy), or from an IndieBound store near you. I would like to thank the publishers for sending me an advance copy of this book via NetGalley. This review also appears on my Times of Israel blog.

One thought on “The Making of a Remarkable Woman”