Book Review of “The Betrayers” by David Bezmozgis. 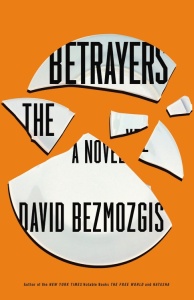 The Israeli Government has decided to pull out of a large block of West Bank settlements with the hopes that this grand gesture can kick-start the peace process. The famous refusnik and leader of the Russian Immigrant party, Minister Baruch Kotler, is adamantly opposed to this and refuses to keep quiet about his opposition, and even blackmailing him about his love affair won’t shut him up. To avoid the onslaught of the impending scandal, he takes his mistress to Yalta in the Crimea. There he chances upon Volodya Tankilevich, the man whose betrayal to the KGB that led to Kotler’s 13-year imprisonment.

Take a heavy helping of Natan Sharansky’s fame, add a handful of Avigdor Lieberman’s recent history and add a dash of a sex scandal (but not as horrid as Moshe Katzav) and mix them all together and you’ll get David Bezmozgis’s fictional Minister Baruch Kotler. Refusnik turned politician whose outspoken objections to Israel’s giving up any land, get him into trouble when someone finds out he is having an affair. In this fictional universe, a pullout from the West Bank is a foregone conclusion. Under such conditions, continuing to be so vocally obstinate with his government while deciding to run away with his mistress to Yalta seems a reasonable option for Kotler.

Of course, the real-life personality would probably never have conducted a secret affair, or run away, but we must remember that this is fiction. This is even more obvious when you look at Israel’s situation right today. After the latest Gaza operation, any possibility of a West Bank pullout, let alone a land-for-peace negotiation, seems about as likely as kosher pigs flying.

Furthermore, having someone choose to vacation in the now Russian-annexed Crimea in 2014 is equally as unlikely. Still, we can easily forgive Bezmozgis for these oversights, precisely because it is fiction, and more importantly, because he lays out such a compelling story, with a streamlined, crystal clear style with just enough flourishes to keep it from being stark or sterile. Even the coincidence of Kotler ending up taking a holiday room in the home of his archenemy is believable when drawn by Bezmozgis’s artful prose.

In fact, this book is as close to a masterpiece as one could ever desire in a writer. So much so that the whole love affair bit got me thinking. What I thought was what has happened to Avital Sharansky over the past decades? She was so candid and visible when her new husband was a prisoner. Even after his release, we still heard from her from time to time. Within a couple of years, she slowly fell off almost everyone’s radar. That Bezmozgis would hit on this, and make up a slowly growing distance between these two, makes opening the door for an affair feel nearly factual, and frankly, I thought it was a stroke of genius.

However, that isn’t the point of this book, which is more about what prices we pay for standing steadfast in the face of conflict and why we might succeed in standing by our morals, and when we have to give up on them. It is also about consequences, and how some decisions can seem to be bad, but if we look beneath the surface, some outcomes are actually far more positive than we originally thought. When Bezmozgis brings all of this together in his dramatic climax, you can be sure that no one is going to be taking the easy way out, and that’s exactly how it should be.

As you can probably tell, I truly enjoyed this book, but to be completely honest, I did find something that didn’t sit completely right with me. This had to do with the pullout operation, which seemed to be happening far too fast, especially if you look at how long it took Israel to leave Gaza under Ariel Sharon. It could be that Bezmozgis is suggesting a longer timeline than what we seem to witness in this story, but it just wasn’t evident enough for me. Other than that, I can only praise this novel and highly recommend it with a full five stars out of five.

“The Betrayers” by David Bezmozgis, published by Little, Brown and Company, released September 23, 2014 is available (via these affiliate links) from Amazon, Kobo Books (for other eReader formats), the website eBooks.com, iTunes (iBook or audiobook), The Book Depository (free worldwide delivery), new or used from Alibris, Better World Books or from an IndieBound store near you. I would like to thank the publishers for sending me a copy of this novel for review via NetGalley. This review also appears on my Times of Israel blog.

2 thoughts on “Protections and Professions”