Book Review of “The Fourth Hand” by John Irving 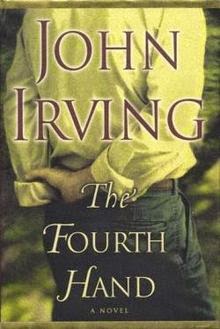 Patrick Wallingford is an unusually attractive man but only a second-rate television news reporter who never seems to get the really good stories. Unfortunately, he becomes a headline himself when a lion bites his hand off during the filming of a piece on a circus in India. After that incident, his career takes an unexpected turn, as does his overly-steamy sex-life. when a hand surgeon offers to give him a hand transplant, his life gets turned upside-down because the donor hand has “strings attached” in more ways than one!

Anyone who saw the film “Return to Me” will know how eerie the idea of a donor’s relative being in contact with the recipient can be. That movie made it seem less creepy, but Irving never goes the easy route, not by a long shot; Irving always takes the most absurd and unconventional path. In this case, the donor’s wife wanting visiting rights of the hand – and what’s more, her thinking that getting pregnant by the recipient of her husband’s hand will help her finally have a baby by her own departed husband.

Irving once again gives us a cast of characters that are … well … frankly, stranger than fiction – if one can say that about fiction. Patrick Wallingford is actually the least bizarre of all the characters in this book – and he’s the main character. He’s supposed to be so attractive that women throw themselves at him, but readers may find it difficult to picture him that way. This is probably because Irving has painted him as a person who doesn’t take charge of his life, but rather seems swept away by its events, which is a sign of weakness. Therefore, while he may be physically attractive, if this type of personality comes through, it would be with stupid, blank expressions on his face. “Stupid” doesn’t turn on most women with this Irving cheats the reader out of getting to ‘see’ the real Patrick Wallingford.

A more anomalous character is Doris Clausen – the wife of the original owner of the donor hand, Otto. What makes her so curious is the way she is attached (morbidly so, if not almost physically) to her dead husband’s hand. That attachment is probably part of the reason Patrick finds her appealing, or perhaps she’s the only woman he’s ever met who isn’t at all sexually interested in him – rather only in the part of him that doesn’t originally belong to him! Here again, Irving doesn’t give enough about Doris to actually allow the reader to envision her as a real person. This doesn’t mean that Irving doesn’t describe her. On the contrary, he is quite clear about that. Unfortunately, like with Patrick, Doris’s character doesn’t seem to click with the descriptions that Irving has given, and she ends up being a very blurred image.

Then we get Dr. Zajac – the hand surgeon helping replace Patrick’s hand, who wants to promote himself professionally. Other reviewers of this book have found this character to be one of Irving’s most comic ever. However, while he was likeable, in an offbeat and humorous way, I found him more sad than funny. This could have been a good thing, but unfortunately, he didn’t garner a great deal of empathy, partially because of his secondary role in the novel. This means that while he seemed sad, we don’t feel sorry for him enough to sympathize with him. The other character is Mary, a co-worker of Patrick’s. Finally, here is a character one can identify with – a hard-working career woman who also wants a family, even if it can’t be a conventional one. Mind you, while likable in some ways, she is also slightly one-noted, sometimes inane and occasionally desperate to the point of being annoying.

The one character of this book that will suck you in is – strangely enough – the donated hand! As absurd as this may sound you may actually see this hand more vividly than any other ‘character’ in the book. In fact, I felt that Irving put more into the hand’s interaction with the rest of the story than anything else. The problem is, just how attached does one want to get to an amputated appendage. Astonishingly enough, this is where readers may actually start to feel some emotional connection to this story. So at least, on this level, this novel did succeed to a certain extent. With the book entitled “The Fourth Hand,” perhaps there is something in the title role of this book having a truly major part to play. Thankfully, Irving doesn’t have the hand speak to us.

All that said, usually character-driven stories are much more intriguing, and usually better written, than plot-driven stories. The plot here is not one that is very unusual, when boiled down to its absolute basics. That being: the trials of a broken man trying to make himself whole again (both metaphorically and literally). Unfortunately, the off-the-wall way that Irving presents this story line puts it into the realm of almost the fantasy genre, and unable to overcome the flaws in the character development. That may be fine for Lord of the Rings, but we’re talking about a literary fiction.

Nevertheless, if a plot-driven story is less captivating, then the overall feeling of this novel was one of detachment (excuse the pun). There is no true emotional connection (sorry, yet again) to the ‘real’ characters in this book. Compared to “The Cider House Rules” or “A Prayer for Owen Meany,” it feels like Irving lost his ability to make the reader care about his characters. And if you can’t care for the characters, then how can you care what happens to them? So while the book has some interesting bits in it, I cannot truly recommend this one, and can only give it three out of five stars.

You can buy this book (via these affiliate links) from Amazon, Kobo (Walmart) eBooks and audiobooks, eBooks.com, iTunes (iBook or audiobook), The Book Depository (free worldwide delivery), new or used from Better World Books (to promote libraries and world literary) and Alibris, as well as from an IndieBound store near you. (This is a revised version of a review which originally appeared on {the now defunct} Dooyoo under my username TheChocolateLady.)

2 thoughts on “The Consequences of a Hand Job”