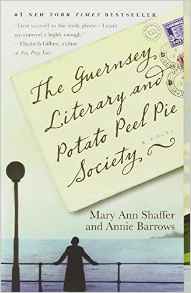 When the Nazis occupied the island of Guernsey during WW2, some of the inhabitants tried to carry on as usual. Others felt they should try to do something in defiance of their captors. When their gatherings become suspect, they use the auspices of a book club and sharing what little food they have to create “The Guernsey Literary and Potato Peel Pie Society.” Author Mary Ann Shaffer tells this story, through letters between one of the society’s members Dawsey Adams, and a London writer Juliet Ashton. They start writing to each other after Dawsey finds Juliet’s address inside one of the club’s books.

Instead of having the correspondence recounting something that was happening at the time, these exchanges are actually a retelling of the group’s experiences. Since most people know little – if anything – about the Nazi occupation of this tiny outpost, this is very appropriate. As we get to know these characters and their lives during that time, we realize how unique their situation was. We get to see the human side of those less tyrannical soldiers together with those who strictly applied their assignment. And since the island wasn’t technically a battlefield, as the islanders muddled through their situation, some of the incidents are actually humorous.

What is even more important is that the reader can connect with the characters, and here Shaffer succeeds in spades. As the story progresses, the reader will increasingly feel empathy for these people and the particulars of their lives. Since this island has such a multi-faceted community, we don’t just get to know the letter writers, but almost the whole population. Although some of the things that happen are slightly predictable, because we feel emotionally connected to the characters, this is mostly forgiven. Of course, it is that emotional connection that makes us keep reading, and many will find themselves laughing out loud and possibly shedding some tears along the way.

I should mention that telling any story using the epistolary form can have its drawbacks. This happens when the writing styles and voices of the characters aren’t distinct enough to make it clear to the reader who is writing to whom. Shaffer, however, does a fairly good job of making these correspondents into different sounding individuals, and this works especially well when she includes letters from another character whose literacy is less than optimal.

With that out of the way, if there are any drawbacks in this novel, they are such minor ones that they don’t deserve mention. Readers may find this so enjoyable and engrossing that it will end up being a very quick read, ending far too soon. And the whole “potato peel pie” business is a clever addition that shows the creativity of the author. After such a lovely debut novel, one always hopes that there will be others to follow. However, the biggest shame is that Shaffer didn’t live to see this book published, and that her niece Annie Barrows, had to work on the final version. This fact could have had something to do with how popular the book became, but I doubt it. I think the public would have taken to it just as warmly. I’m going to give this a full five stars out of five and highly recommend it.

“The Guernsey Literary and Potato Peel Pie Society” by Mary Ann Shaffer and Annie Barrows is available (via these affiliate links) from Amazon, Kobo eBooks, Kobo Audio Books, iTunes (iBook or audiobook), eBooks, The Book Depository (free worldwide delivery), new or used from Alibris and Better World Books. (This is a version of the review that originally appeared on {the now defunct} Yahoo! Contributor Network, and DooYoo under my username TheChocolateLady.) This is now a major motion picture, but I’m not sure I want to see it!

6 thoughts on “An Occupied Island and Unusual Occupations”