Book Review for “The Case of the Haunted Swamp” by Cliff MacGillivray and Kelly Ward, illustrated by Phil Mendez. 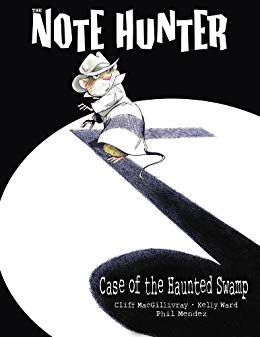 Legend has it that Mozart wrote his “Perfect Symphony” using gold ink. But as soon as the ink had dried, the notes magically came alive and flew right off the page, scattering themselves across the world. Over two hundred and twenty years later, the grizzly bear musical philanthropist, Lionel T. Hollingsworth wants to capture them and return them to the empty sheet music. He’s hired the famous mouse detective, and musical genius, T. W. Strouse to find them, and he thinks the first ones are haunting his own old homestead on the bayou in Louisiana. This is the first in the series of “Note Hunter” children’s books, “The Case of the Haunted Swamp” by Cliff MacGillivray and Kelly Ward.

Disclaimer: I don’t usually read or review children’s books, since my children are all fully-grown adults, and I (still) don’t have any grandchildren. But if you throw the name Mozart into any story, I simply can’t resist, no matter the genre. Therefore, your patience with this review is hereby respectfully, requested.

This book seems to be just about right for children aged about eight. Although some of the material here is somewhat sophisticated, due to the classical music elements, it still has a child-like quality, with all the characters being animals. This is truly a clever combination that will appeal to animal loving children while also satisfying any music loving parents. Of course, a mystery is something that most children (and many adults) can appreciate, as it will keep their attention by answers today’s younger readers’ needs for a good heaping of “action.” As far as this story goes, the plot has just enough twists and cliff-hanging scenes to satisfy both children and parents, alike. Equally as important, the writing seemed to be of a proper level for this age group, and flowed nicely throughout.

For this age group of new readers, having illustrations is certainly another draw (no pun intended). With them, children won’t feel overwhelmed by too much text, while at the same time, their inclusion will urge them to keep reading so they can better understand what is being depicted. The art here is absolutely top-notch, professional, and strongly reminiscent of classic cartoons (no surprise, considering the backgrounds of the illustrator and colorist). Furthermore, they are perfectly attuned with the story, both complimenting it and making it all the more compelling.

With all this praise, you might be wondering if I thought there were any drawbacks with this book. In fact, there were a few things that didn’t sit completely right with me. The first was that I found some places where the writers explained certain terms or phrases, which I thought were unnecessary. I truly believe that most kids of this age will understand what they were getting at, and the explanations might annoy them as being condescending. Those that don’t get those bits can easily ask an adult to explain, and that will mean they’ll be learning something (which is always a good thing). Thankfully, there were only about three or four instances of this, so this isn’t a huge problem.

My other problem with this book is my own personal pet peeve. Personally, I have a problem with worlds that are almost exactly like own, but built and developed by beings that – in most cases – don’t have opposable thumbs. This was one of the reasons why I didn’t like the movie “Cars,” for instance. On the other hand, I am willing to accept animals living in a human world and having their own human-like lives and adventures against that backdrop (a la “Ratatouille,” as an example). That said I’m sure that this won’t bother most eight-year-old kids, unless they’re terribly precocious, and in that case, this book won’t be for them anyway.

Lastly, this is definitely a boy’s book. Not that there’s anything wrong with that. However, some women (mothers in particular) might not appreciate how the female characters here are portrayed. With one exception, they come dangerously close to being stereotypes and don’t seem to be all that important to the plot. I might be over sensitive about this, but the writers might want to consider including a strong, central female character into their next story.

Those niggles aside, I found this book to be delightful, with fun characters, a good plot, lots of action and beautifully rendered illustrations. While it isn’t perfect, it certainly is an excellent first book in what I am sure will become a very popular series with this age group. For all that, I’m going to give it a healthy four out of five stars and recommend it to any parent of a mystery loving child who wants to encourage them to read more.

“The Case of the Haunted Swamp” written by Cliff MacGillivray and Kelly Ward, illustrated by Phil Mendez. This is the first in the “Note Hunter” series for children aged 8 and above, and was published on March 3, 2014 by Beet Fizz LLC and Amazon Digital Services, Inc., and is available from Amazon (affiliate link). My thanks to the authors for sending me a review copy (via a mutual friend).