Book review of “Ardor: A Novel” by Lily Prior. 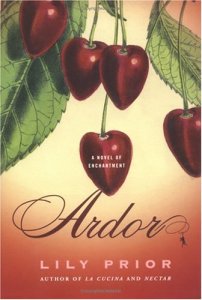 This is a story of love – misdirected love, unrequited love and love between people who, for one reason or another, never find a way to bring their mutual affection out into the open. What makes this story unusual is that at the center of this story is the love that a donkey has for a human! Yes, that’s right. And one of the unique things about this story is that it is from the perspective of that donkey.

While this idea may seem innovative and interesting, it is important that readers can identify with the story. If the reader cannot relate to the character narrating the story, then the writer loses credibility and readers will feel disconnected. Fortunately, Prior was unable to keep this pretense up throughout the book and in her desire to write in third-person, omnipresent via the donkey, the “donkey” feel to it fell away during most of the action. While this may seem inconsistent, this actually works in her favor, as the occasional disturbances become fewer and farther between.

Prior also employs “magical reality” here; taking seemingly ordinary people and giving them or their surroundings extraordinary qualities, seeping into far more than just the main character. In fact, it is difficult to actually pinpoint one person (or animal, as the case may be) as being totally central to this story. If pressed, one could say that the main characters were the donkey, and the object of the donkey’s affection. However, the story begins with the journey of a woman who comes into the village to find her twin sister, the men who fall in love with her, and their rivalry. Their parts are no less important to this book, and at times that the focus is mainly on them. There is also the magical effect of this woman’s presence in the village, and how this influences the action of the story, both on the other people in the village and on the physical changes in the village itself.

Sounds a bit confusing, doesn’t it, but imagine if you will, the way a hurricane or earthquake affects a town. People re-examine their lives, need to adjust and change, look at their pasts and towards their futures. This affects everyone in one way or another, even if in the end, people ignore what’s going on around them and return to their old ways of living. This is basically the second theme of this book – how the unexpected effects different types of people. In this case, the event is the arrival of Fernanda Ponderosa to the small Italian village where her twin sister, Silvana lives.

Prior’s fills her Italian setting with as much opulence as enchantments. Prior’s love for Italy is obvious, and her descriptions of the surroundings verges on the delectable. When Prior describes some spot or view, one can easily visualize her words, and you’ll find yourself almost transported to these vistas through her cunning use of language. Moreover, the land and climate of this unnamed village play no small role in this story. In fact, the weather, agriculture and flora seem to react to the action and both reflect and contradict the goings on within them, as if the country itself has become yet another character here. It’s as if Prior is trying to give you a total 3-D effect to the printed word, and on many levels, this works well for her.

Prior’s primary talent is describing a large cast of characters – and animals – with so much quirky and magical splendor. However, while there is a menagerie here, it is only the donkey that actually has a “speaking” part, and we only observe the rest of the zoo – thank goodness! Still, even with all these crowds, it is actually quite easy to keep track all the characters.

The verdict here is that despite the slight lapse Lily Prior showed when using a non-human narrator, she still shows a special talent for storytelling. Prior can set the stage with a quick phrase or two and put us visually where she wants us. She has a way of suggesting the emotions of her characters without “bodice ripping” scenes. She also has a knack for making the usual into something special by giving her characters a generous touch of the mystical and supernatural. And she does all this while telling a complex story in a compact and interesting way. This is certainly a worthy effort, but deserves only four stars out of five; that donkey narrator is still a bit lame.

“Ardor” by Lily Prior is available (via these affiliate links) from Amazon, Barnes & Noble, Kobo Books (USA, Canada & Australia), iTunes (iBook or audiobook), The Book Depository (free worldwide delivery), new or used from Alibris or Better World Books as well as from an IndieBound store near you. (This is a version of a review that originally appeared under my username TheChocolateLady on {the now defunct} sites Dooyoo and Yahoo! Contributor Network.)