Book Review for “Mastering the Art of French Eating” by Ann Mah. 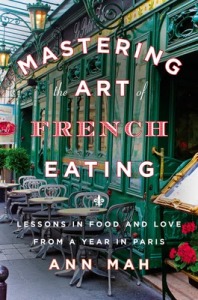 Ann Mah spent three years in France with her diplomat husband. She used that time to find out more about some of their culinary specialties – how they became famous, their history and how they’re made. Of course, when it comes to writing about French food, there is no one as famous as Julia Child. She discovered this country’s rich (in all senses of the word) culinary fare while her husband was stationed there as a diplomat not long after WWII.  Over 60 years later, travel and food writer Ann Mah found herself in a very similar situation. However, almost as soon as they had arrived in the magical city of Paris, her husband was sent to Iraq, without her. That meant she had a year on her own. While being parted from her new husband, one of the ways she dispelled depression was to investigate some of its most treasured foods. And that is how her book “Mastering the Art of French Eating” came to be written.

The ten chapters of this book each focus on a place and the food that they are famous for, starting off with Paris and steak frites. From there we go to Troyes and what sounds like France’s most disgusting dish, andouillette (you’d be best to look it up on an empty stomach). We also get crepes from Brittany, Salade Lyonnaise from Lyon, soupe au pistou from Provence, cassoulet from France’s southwest (Toulouse, Castlenaudry, Carcassonne), choucroute from Alsace, fondue from Savoie and Haute-Savoie, boeuf bourguignon from Burgundy and aligot from Aveyron. Since only those true culinary Francophiles will be familiar with these places and foods, Mah educates us not only about their composition and taste, but also on how each location became known for their signature dishes. Thrown into the mix is a good helping of recipes and cooking tips, together with Mah’s own experiences in duplicating these treasures – not limited to those items in the chapter headings. To top it off, we also get a generous sprinkling of interviews with chefs, restaurateurs and gastronomes.

Probably one of the most interesting things you’ll find out through this book is the French penchant for making a club, society, federation or association for some of the most obscure things one can think of. For instance, we are quickly introduced to the AAAAA which stands for the French for “A friendly association of authentic andouillette connoisseurs,” of all things! You’ll also find out how certain foods considered French have origins from other countries, not the least of which being neighboring Spain, Italy, Switzerland and Germany. Together with that, you’ll find out just how proud and protective the French are regarding their favorite feast items, especially those that were developed during times of famine.

In order to make this a more personal account, Mah also stirs in some descriptions of the sensory attributes of her surroundings and visits. These come across like travel diary entries, which are lovingly crafted to make us feel like we’re almost there. Mah’s adoration of France comes through strikingly in these passages, as we live through these experiences with her. My only problem with this book is that some of the more personal parts of her story felt like they edged out all the gastronomic parts. For instance, I don’t really think we needed to know so much about why she never learned French while growing up, her mother’s relationship with her step-grandmother, or even most of the bits about the trials and tribulations of being part of the diplomatic corps.

In fact, one could almost say that this is really two books. One being everything associated with the food in France and the other being all of Mah’s tangents that could almost be described as a coming-of-age story. My problem is that I found some (but certainly not all) of the latter to be somewhat distracting. I often found myself racing through those passages, anxious to get back to the point. To defend this, one could say that without the sauce, the meat will seem too dry. On the other hand, without a good enough sized portion of meat, the extra sauce will just end up being a congealing puddle on your plate.

Overall, I really enjoyed this book, which at times felt almost like a novel. The writing was vivid and clear, even with all of the translating Mah had to do. I’m just not sure she struck the perfect balance between the culinary and the personal. If you are the type of person who feels the best part of the main course is sopping up the leftover gravy with your baguette, I’m sure you’ll find this book to deserve a full five stars out of five. However, if you think the highlight of your meal should be the luscious marriage of the protein and how it’s enrobed, you might find this book deserves no more than three out of five stars. For me, the jury is still out, so I’ll compromise and give it four out of five stars.

“Mastering the Art of French Eating” by Ann Mah, published by Viking Penguin released September 26, 2013 is available (via these affiliate links) from Amazon, Waterstones, Kobo Books (USA, Canada & Australia), iTunes, the website eBooks.com, The Book Depository (free worldwide delivery), new or used from Alibris or Better World Books as well as from an IndieBound store near you. For more information about Ann Mah and her writing, you can visit her webpage.  My thanks to the publishers for inviting me to read a review copy via NetGalley.

2 thoughts on “A Taste for French Gusto”