Book Review for the short story collection “Down at the End of the River” by Angus Woodward. 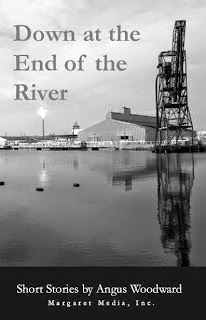 I have never been to Louisiana. In fact, the first things I think of when I hear the name of that state is humidity, hurricanes and heat. Other words like Creole and Cajuns also spring to mind, as do crocodiles (or are they alligators? I never can tell the difference). Alliteration and stereotypes aside, reading a collection of stories set somewhere that’s new to me, is always a draw – a virtual vacation, if you will. Angus Woodward draws his audience into his home with these ten fascinating stories. They are entitled:

Aside from the location, what all these stories have in common are his characters that each has something slightly off-kilter or quirky about them, while at the same time are still very ordinary. For instance, in the opening story we learn about an aging burglar thinking of retiring from the business, and not because he lives down the road from a retired cop. Probably the most mundane of his characters are found in the story “Guttering Out” which follows Curtis, a young man living on the streets, while one girl in his group is falling in love with him. Even here, Curtis is portrayed as being more involved in the tourists he sees and hears on the streets of New Orleans than he is in money, food, shelter, the future or the girl.

This disconnected creature is starkly contrasted in the story “The Ride” in which Harold is almost completely self-absorbed. In some of the other stories, Woodward brings some of his characters to such levels of introspection that they are almost delusional, such as in “Gang of Three” where James has slowly been convincing himself that his postman is conspiring against him. This also comes through with lashings of humor in the last story “Don’t Put Me Down” which is my favorite story in the book.

Woodward also gives us several of stories that deal with love – new, old and ending ones. I particularly enjoyed the tenuousness of the relationship shown in “The Story of Jane and George” where she is Vietnamese and he was a soldier there during the war. That fragility of emotions comes through again in “A Proclaimer in Creeperdom” (which is terribly funny) and in “Qatar Is an Emirate” (a more poignant tale) which both explore the early stages of a couple just starting to get together.

After reading these stories there were two things that struck me about them as a whole. The first was that Woodward tends to write his stories more like vignettes than complete wholes. By that I mean that for each of his stories, while we find out most of what has happened before the scenes we’re witnessing, we are never sure what will become of these people after the last sentence. This open-ended style of writing a short story can be extremely effective, because we are given this beautifully thought provoking snapshot. On the other hand, some people might feel that this gives these stories an unfinished feel to them. I don’t agree with that at all, since I find stories that tie things up too neatly can be annoying, if not an insult to the readers’ intelligence. This also means that I can easily imagine Woodward taking any one of these stories and going on to make them into full-blown novels.

My other impression was that I felt just a touch disappointed with these stories in that I didn’t get more of that “Louisiana virtual vacation” that I was looking for. Yes, I know that’s asking a whole lot from a short fiction collection. Still, I felt more like I was getting a tasting with just hints of the flavors of this location without actually getting at least one or two whole bites. I’m not sure exactly how he could have given me more, but I wanted it all the same. This is the only reason why I’m giving “Down at the End of the River” by Angus Woodward only four out of five stars, since everything else about the book is beautifully written, with fascinating characters and interesting plots.

“Down at the End of the River” by Angus Woodward Published March 31st 2008 by Margaret Media, Inc., and is available (via these affiliate links) from Amazon, Walmart (Kobo) eBooks, The Book Depository (free worldwide shipping), iTunes as an iBook, new or used from Alibris, used from Better World Books (promoting libraries and world literacy), or from an IndieBound store near you. I would like to thank the Library Thing Giveaway for sending me a copy of this book for review.

One thought on “Ten Warmly Flowing Stories of Louisiana”