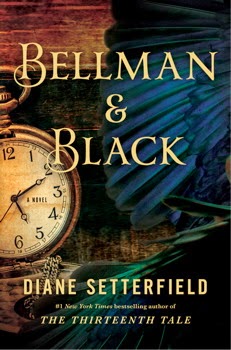 William Bellman started his life humbly. With a father who abandoned him and his mother, and a grandfather who never approved of them, he still held no bitterness. Then his uncle took him on at the mill and he quickly proved himself to be intelligent and hard working with an excellent head for business. Soon he was prospering along with the mill. But everyone’s life is touched by death. It was at those times that William began noticing a dark, cloaked figure – someone who disappeared as quickly as he appeared. When they finally meet, this mysterious man becomes William’s partner as he takes on a new business venture, but at what cost?

I think it is important to note the prologue of this book. William’s story begins with the recounting of the incident when he was only 11 and used his catapult to kill a rook. By all rights, he shouldn’t have succeeded in killing it, and yet he did – through careful calculation. The next day, a fever overcomes William and by the time is well again, the whole incident is forgotten. This is what gives us the first indication that Bellman will succeed. The innate abilities that helped him fell that bird were the same ones he used to solve problems and accomplish difficult tasks and predict outcomes. What’s more, we soon find out that he does this with an amiable manner that makes him likable to all.

It is precisely that likability that Setterfield puts into our minds at the outset that makes this story so unique. We are immediately sympathetic to William because of this story. The depth of that emotion increases as we see how his good nature never lets his or his mother’s past difficulties, or even the attitudes of his grandfather make him embittered. So when one after another of the people in his life begin dying, we are convinced that Bellman is almost like a modern-day Job. Even as everything gets darker, and his work takes over his life, we still care about him, we want him to be happy, and we believe he deserves it.

Setterfield calls this a ghost story, and in many ways this is accurate, but there’s nothing scary here. Of course, there is the ominous stranger, who flits in and out of Bellman’s life, and is therefore somewhat ghostlike. But there’s more to it than that, and the more we read of this story, “ghost” becomes more a metaphor for the whole story than a noun reserved for the mystical being that Bellman names “Mr. Black.” What’s more, Setterfield draws us into this tale, bit by bit, with a story that builds and breathes. The tension she constructs here rises in undulating arcs, with each successive climax adding to the next until she reaches the final one. In this, she melds the plot and the character development together in perfect harmony, making it all the more of a compelling read.

Setterfield also intersperses the story with interesting passages about rooks, especially the historical mythology surrounding them. In this, she makes the innate melancholy of this bird a symbol for sorrow, while reminding us that its flight is also a symbol for hope and freedom. We get see how some of their qualities are not unlike those of humans, as she builds up a type of synergy between Bellman and these birds. Finally, these snippets become like dots on a graph or meeting points, which all connect back to the story in the prologue. All of this is done with a luscious and rich prose style that fits perfectly into the late 19th century setting, without feeling the least bit old fashioned or stodgy.

If there is anything I would criticize about this book, it might be that I would have liked a bit more of the story of Bellman’s daughter, Dora. However, on second thought, this might have been distracting, and could possibly have made the ending of the book less poetic. In short, I’d be hard pressed to find any fault with this novel. From all this, I’m sure you can see that I am convinced that Setterfield is a very exciting talent. She has the ability to mold and shape a story together with her characters and settings that all blend in together to make one, complete vibrant picture. This is why I have to give Diane Setterfield’s novel “Bellman & Black” a full five stars out of five and highly recommend it.

“Bellman & Black” by Diane Setterfield was released on October 10, 2013 in the UK by Atria/Emily Bestler Books, a division of Simon & Schuster, and in the US on November 5, 2013 is available (via these affiliate links) from Amazon, Waterstones, Kobo Books (for other eReader formats), iTunes (in iBook or audiobook form), The Book Depository (free worldwide delivery), new or used from Alibris, or from an IndieBound store near you. I would like to thank the publishers for inviting me to read this book via NetGalley.

One thought on “The Many Collective Nouns for Rooks”